Category: Enlightenment and Teachings Tuesday, 04 May 2021 Written by Aluna Ash 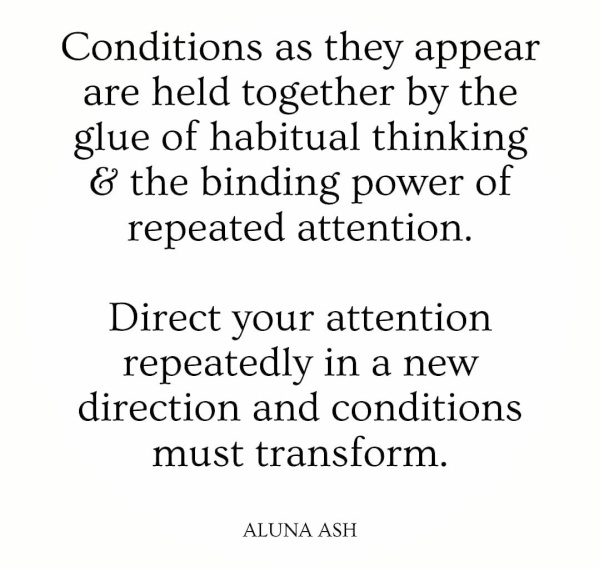 Conditions change when we develop the mental prototype of the condition in consciousness.

Many believe theyare fighting some mechanical machine evil matrix because they do not know the power animating it so they continue to create new limitations or systems of opposition and are constantly reinforcing the belief that the outside must change first.

We cannot see from a level of consciousness we have not developed.

If we want a better world, we must birth it from with consistently- not by want, not by complaining, not by blame, not judgement or resisting.

By deciding to develop the consciousness, believe and remaining Faithful to what is unseen.

We have to operate at a higher level to not be controlled by the Reverse inverted Order of the world without. We have to go to the only savior within instead of waiting for outside saviors to come.

It can be very confusing.

Above is within and higher levels of an internal order.

Below is without and lower levels of an internal order projected and observed objectively.

So if we are looking to above as in physical up, to the stars or outer space, or what is believed to be outer space beings, aliens, etc... then we are looking to a lower dimension time block of effects, shadows, conditions below-without not the cause... not using our creative power intentionally.

All is within. All is imagination. When is imagination is distorted, misused or darkened by lack of awareness of the One power animating all we are aware of or experience, then it appears as things or beings are external and separate powers of their own. When illuminated- it is a Living World that we rise into where we see infinite levels of our own Self moved by One Power.

We must rise above the internal veil of the level of opposite pairs of conditions and unite heaven (above within) by our awareness (I AM) to transform the below-without.

Heaven is a level of archetypal emanation that unfolds into the lower dimensions of our awareness as patterns, images, personifications, sense impressions and physical forms.

All is projected through our center (I AM, unconditioned awareness) which is our connection to an infinite potential energy/intelligence giving "Life" to pairs of opposite conditions exchanged between the conscious and unconscious at this level, to give the illusion of a personal separate independent experience.

Battling the outside is like being stuck in a dark dream of mirrors running in circles creating Laws of Mind that repeat because the Law of Being influencing due to unconscious assumptions is not known. Like being stuck in a sea of confusion and misunderstanding with glimpses of the inner world or Truth, but twisted and distorted by the veils of perception. The veils of perception are evil believed to be it's own power.

There is no matrix trapping anyone. People are trapped by their own misunderstanding. Everything outside moves by inner activity. People will have to work through a believe in an evil matrix as a power of its own to be free from the Laws of Mind self created or self reinforced.

Until then, they cannot intentionally operate their God given power freely because they cannot truly know the power within until they give up the belief an an evil or enemy as a power of it's own. It just reanimates, recreates, reactivates the same outer response although it may appear a little different or appear as a different time.

This is why history often repeats, its an unconscious self reinforced cycle of misunderstanding and misused creative power of imagination.

We came to remember our omnipresent power, to fulfill a pattern and to transform our consciousness in order to uplift from within not fight the results of the states we have unconsciously fell into and unintentionally projected as the world conditions we see without.

The Golden Age does not come by time passing or moving forward in the world below-without. It's eternal. We spiral up through a pattern built in the depths of the unconscious. "Flesh and blood cannot inherit the Kingdom" (or Golden Age) We must be born from Above, meaning we must rise from a certain level of creation from within individually. Above means within- rise into higher states to know the cause of all the effects below.

The pattern and birth from above is out of our conscious control, but we can become more receptive or we can delay and create more steps to retrace. One reason many have not experienced this rising above the dream of opposites even though they had an initial awakening, is because they are reinforcing limiting beliefs in superstitions, outside saviors or outside enemies repeatedly, so by Law, those assumptions unconsciously accepted must play out through them until they are ready to move beyond that state.

We cling to states out of fear even when the state we are in doesn't feel good... change or the unknown can be scary. We are afraid to loose our identity and all we associated with it but at the same time want the results of the change. Often times, we cling to concepts until we feel so limited by the state that we finally decide to surrender or the desire to expand will overpower the limiting beliefs & concepts we have clung to.

Sometimes we unintentionally create what feels like forced change in difficult ways. Sometimes we consciously decide to create the changes and act consistently upon that decision.

Either way, we are being led to develop Faith and take full responsibility for our creative potential to transform destructive limiting beliefs into expansive constructive ones.