Beyond Belief
A+ A A- 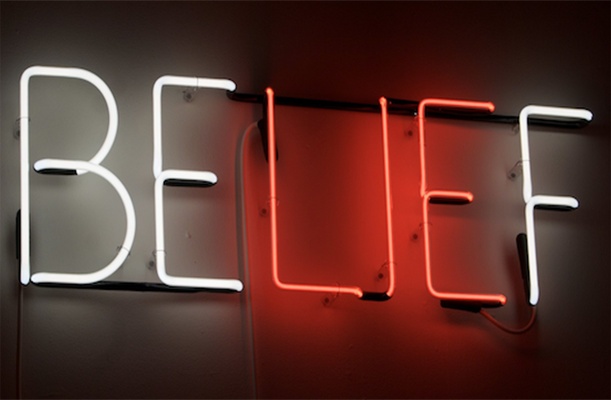 image from a reproduction of a destroyed neon work by artist Joe Rees; photo by Steve Rhodes CC BY-NC-SA 2.0

This is another post on the subject of radical non-duality. Caveat lector.

I’ve been thinking about how and why we come to believe what we believe.

Wild creatures, I think, have it right: They believe what they observe, what their senses tell them. Such ‘self-evident’ truths are, literally, obvious.

All creatures are conditioned by their experiences, and for most creatures those experiences are delimited by what their senses tell them has happened. As Melissa Pierson explains: “The same law of behavior affects all creatures’ actions: we do something, it produces pleasure or it produces pain or it produces nothing, and the result determines whether we continue doing it, stop doing it, or do it differently, and these are the only options.”

Whether “it produces pleasure or it produces pain or it produces nothing” is an assessment, for most creatures, based entirely on their observed experience. But when language enters the picture our beliefs can quickly get very complicated. Suddenly we are pressed to believe not only what our own experiences and observations have led us to believe, but also what others we trust (scientists, journalists, and those we have personal relationships with) have observed or experienced.

So when as a small child our observation is that the sun circles the earth, but we are told it’s the other way around, we have to balance the two to decide what we believe. And there are other things we’re told are true (eg religious and moral beliefs) that usually can’t be shown to be true from observation or experience, but which almost everyone we know and trust asserts to be true, based not on evidence but on anecdote or just on faith. Now deciding what to believe gets even harder, and more tenuous.

I used to believe in good and evil, in progress, in humans’ vast capacity to make things better, in the standard cosmological theory of space-time, matter and energy and their origins, in evolution and Gaia theory, in human self-consciousness as an evolutionary advance, in free will and personal responsibility, in life having meaning and purpose.

So how is it that those creatures whose actions and beliefs are based solely on personal observation and experience seem so much more adept at living successfully and equanimously than our destructive and unhappy species?

I’m the stereotypical Doubting Thomas, always challenging what I’m told and what I believe (I have a poster behind me on Zoom calls that reminds me: “Don’t believe everything you think.”) From a very young age I’ve had a nagging feeling there’s something very wrong with how we humans live, and what we believe, but I couldn’t quite put my finger on it. Surely, I keep asking myself, life shouldn’t be this hard, this complicated, this stressful and confusing. All this bewildering complexity, just to survive and struggle in a world where other creatures have thrived for hundreds of millions of years without having to know any of it?

What, I’ve asked myself, if it isn’t actually that hard? What if all of this new knowledge of what to believe and what you ‘should’ do is not actually true, or real, or even necessary? What if what’s actually true is not obvious, and notscientifically verifiable, and does not have to be taken on faith?

This is where I landed when I began exploring radical non-duality. The more I’ve studied and learned, the more I’ve been filled with doubt about what I believe. Astrophysics and quantum science, it turns out, seems to make more sense if there is no such thing as time, and if what we observe as space, and things in it, are actually merely appearances in an infinite field of possibilities. In other words, that everything we call “real” is just an invention of a brain desperately trying to make sense of everything, and hence mistaking a constructed model of reality for the “real” thing.

Neuroscience, at the same time, now seems to posit that there is no such thing as a “self” (the homunculus inside our heads is nowhere to be found), and that there is no such thing as free will. In other words, there is no “you”, and everything “you” seemingly do and believe is simply a conditioned response. Not predetermined, mind you, as an infinite number of unpredictable variables can affect your conditioning, but thence what you do and believe is determined completely by that conditioning. “You” have no say in it.

No time, no space, no free will or choice, and no “you” — this is a loathsome and abhorrent possibility for creatures that seem driven to make sense, to know, and hence to make things better. I did not want to hear this message. It makes no sense. I refused to listen to it for years. It struck me as anti-intuitive, counter to what was observable (I was a phenomenologist), anti-science, unprovable (the ultimate condemnation, to me), and utterly useless.

Two things finally forced me (as I evidently have no free will!) to open myself to the heresy that this possibility, the opposite of all I believed, might actually be true.

The first of these were the glimpses. There have been times when ‘I’ seemingly disappeared, and it was somehow ‘obvious’ (though not to ‘me’ as ‘I’ was not there) that there was only everything, eternal and already perfect, and that this ‘everything’ was just an appearance out of nothing. When the glimpses ended and ‘I’ returned, they were recalled as being wonderful, mystical experiences, but I dismissed them as daydreams, disconnected from reality.

But more recently they have come across differently, as a ‘seeing through’ of the illusions that have dominated my life. It was ‘obvious’ that what was glimpsed was not only true (and everything I had believed to be real and true was false), but always and already there — there was no anxiety about ‘holding on’ to this glimpsed reality because it was already there and already everything, complete. The veil of my self and my separate existence were seen for what they were —illusory and transient, of no importance whatsoever.

I had heard and read descriptions of this from many people, from all walks of life, all over the world, some of them dating back millennia, and while what they were saying varied enormously in how (and how articulately) it was said, it was absolutely clear that they were all describing the same thing. And the reason for the inarticulateness was that what they were describing cannot be described.

The second, more recent discovery is that there are (apparent) people all around us who no longer have (or never had) the illusion of self or separation, but who don’t seem different (or at all dysfunctional) because of it. To the extent it is in their nature to talk about this, I have called them ‘radical’ non-dualists to differentiate them from non-duality ‘teachers’. Almost all of what claims to be ‘non-dual teaching’ is actually utterly dual — it is describing the nature of separation and what can be done to overcome it and become ‘enlightened’ or ‘liberated’ or achieve some ‘higher state’ or other nonsense.

Only a small number are saying what is obvious after a glimpse — that there is no one, no separation, no time (or past or present or ‘now’), no space, no thing ‘real’ at all — just ‘one-ness’ appearing freely as everything, for no reason, always and already. This is excruciatingly difficult to convey — as it cannot be described, this message has to be explained mostly by saying what is not, rather than what is. ‘Meetings’ with radical non-dual messages are just now starting to evolve a common approach and vocabulary to try to articulate this unfathomable message, and to reinforce that all alleged ‘paths’ to seeing this are inherently misleading and futile, and that there is nothing ‘you’ can do to see that there is no ‘you’. There is no ‘teaching’ by the hopeless messengers of radical non-duality.

This is not a ‘theory’ — it is what glimpses show, and what those apparent characters who lack the illusion of self or separation describe, as being obviously, eternally, and already true. They have no axe to grind, nothing to promote, and nothing to gain from conning us.

No ‘one’ can really believe this. It asserts the non-existence of anyone who can believe anything. This message makes no sense. Yet somehow, despite the staggering cognitive dissonance it presents, it is, at least for now, believed here. It has rendered all my other beliefs moot, though this well-conditioned character continues, apparently, to act in accordance with the ‘old’ beliefs. It’s not that I passionately believe this message, a message that makes no sense. It’s more that I can no longer believe in anything else — nothing else makes sense anymore either.

I’m learning to be careful about what I believe. My beliefs have caused me much grief and stress, and they make poor place-holders for what I do not, based on my own direct observation, know to be true. I watch the wild creatures in the forest below my house, and envy their obvious freedom from the need to believe.

Whatsapp
back to top
Following Our Joy to Find Freedom
Making Sense of Who We Are
Could Telepathy Be How Plants Communicate?

We have 1648 guests and no members online