Where the Action Is NOW– Relationships

Waking Up The Goddess: Where Men Meet Women 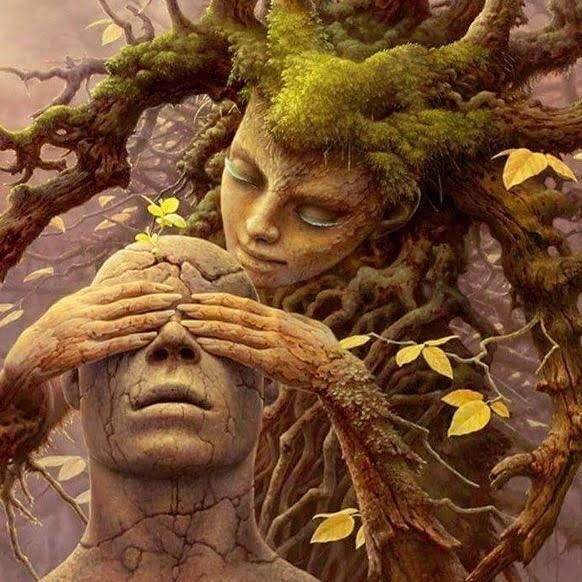 A few weeks ago I had the opportunity to meet with a wonderful group of people as part of an ongoing learning process. As these experiences took place in a private space, being very personal to everyone, I cannot share with the public anything that relates to others or that indicate who they are. Sacred spaces must be respected at all times, shared and enjoyed with the participants while they last, but nurtured in a silent memory once the experience is over.

What I can tell from what I saw and experienced during those days, is that, it confirms that everyone is a student and a teacher. There is always something new to learn from everyone. It was also obvious that there is in fact hope for the world, its transformation and the raise of collective consciousness.

I can, however, share part of my experience, as it illustrates the practical side of the initial message: 'Waking Up The Goddess' written over a year ago. The scene takes place during a group study of the enneagram's subtype sexual four (S4) and its character and personality. According to the enneagram there are nine different types of personality, and each one is divided in three subtypes to allow anyone the study of their character.

The group was formed by three women and myself. The purpose of the meeting was to find positive ways in which to transcend character and personality, so as to continue evolving in our personal development. The call for humility was unanimous.

The downfall of the S4 is that everything and everyone is more important than themselves, thus engaging in a life of constant work and giving to others. In order to do so, the level of work and productivity is relentless, to the extreme of neglecting to care of themselves and sacrificing all comfort. What's important is the final product, never the self. The end result to their work might be extraordinary; the consequences to this type of behaviour is exhaustion and a heavy toll in their personal lives.

As I am not an expert on the enneagram and it is not the topic of this blog post, I can only recommend a book that offers thorough information on the subject and different types of personality: 'Character and Neurosis: An Integrative View' by Claudio Naranjo.

What called my attention during the meeting was their selfless dedication, love and kindness. Clearly these women couldn't see the humility they already had and were expressing, but it was obvious that it was present. Minutes within the conversation I felt at home. The feeling of trust in them, their words and decisions were so overwhelming, that at that point I would have given them the remote control to re-organise the world if such thing had existed. There was no doubt in me that within a week, this world would be a much better place.

Even though I participated in the conversation, I was happy to take a step back and listen. They were doing a great job leading, and spoke with one voice. Not that they needed my permission or anyone else's to lead. At that moment I would have provided them with support and provide those simple things that they deny themselves on a daily basis so they coulld continue working. Furthermore, I had to attend a different session. Not only they told me where to go; they took me there and made sure I was on time.

The session continued without me. We never discussed the rest of the session or if I had different impressions to add before the presentation the day after. Minutes before the presentation it was suggested that I spoke for the group. I suggested that one of them talked instead. I didn't know what their conclusion had been, but I trusted that it would be the right one. My contribution was mentioned briefly, even though they spoke as a group.

The key elements in this situation speak clearly of the need of support, so as to allow women to improve, expand and find alternatives to a world that seems to have run out of them. Their first intention was to improve themselves. If we want to change the world, first we have to change ourselves. Through dialogue and contribution they presented a convincing voice. There was never an argument or disagreement; just dialogue and perspective.

While the spiritual path might be deeply related to a set of beliefs and abstracts, hardly any of these principles work without practical steps. In this sense, the message of Waking Up The Goddess is to achieve a balance of male and female energy. For this to happen, the practical step to follow is for men, and the current male energy to take a step back or two. The male energy is transgressive. Not only we ran out out ideas, we're arrogantly moving forward with the same ones without questioning neither methods, nor results. Moving forward does not equal to advancing. We're not. To see this, one only needs to take a look at the situation the world is in. For men to meet  women in a place that allows equality and integration, we must clear the space, so others can bring a new voice and energy.

At the same time it is important to emphasise once again, that for the world to transform, both men and women must work together. Women are inclusive and happy to facilitate answers and integrative solutions for everyone. There is a reason why more women than men are engaged in personal development and spirituality, and it is during the experiences previously described that it is evident that women will change the world. One must experience it and see it to know what I'm referring to.

The new role of the men is to support and contribute to such transformation. It is up to conscious men to share the message and educate other men to take a step back; to begin to lead a life of cooperation, love and mutual respect. Men can only see themselves in the eyes of a woman. As long as the light in the eyes of women is dimmed and not allowed to express love, the world will only continue moving towards its destruction, as well as deepening into the regression of the species.

It is sad, almost tragic to see that in order to break through, women are adopting some of the negative traits of the male energy, such as arrogance or competition, thus losing femininity.

In this moment in history, humanity has the power to manifest a new collective consciousness or to move towards the dark ages again. In order to accomplish this, we must begin to make collective choices from a new platform of respect, cooperation, equality and love.

The glorified era of individualism must end. One does not have to renounce to their individuality, but to the glorification of it. We're not that special after all. Everyone is special and has something to offer that others cannot. This doesn't make us more or less special, just different, and an essential part of the whole.The deification of individuality is leading to a new era of isolation in which individuals will not be able to communicate with others face to face, and consequently to loneliness will become endemic.

Men have to begin to accept their feminine side, so as to attract, develop such energy, and to live in balance between the practical and the spiritual, with a softer voice and a more human touch. This is achieved through humility, and perhaps considering that after all, we do not know it all, we just assumed we do because once upon a time patriarchy told us we did.

Eventually we will all recognise that The Goddess is each man and each woman and that this is a creative energy within that we have been suppressing for centuries, with the excuse to achieve. There's no need to look back to see that we achieved very little. Instead we're merely surviving. Perhaps, only perhaps it's time for a change. When you're ready.

back to top
How Do I Discern the Real from False?
Explaining our Lives Away
Are Family Members Toxic? 10 Things to Remember

We have 1487 guests and no members online