July 4 Is Not The Birthday Of The United States

July 4 Is Not The Birthday Of The United States 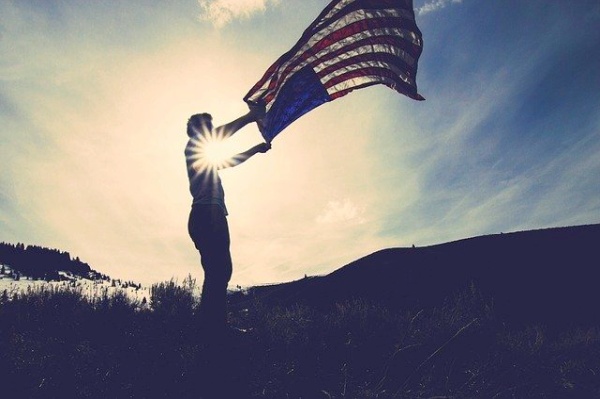 Though the US celebrates its birthday as July 4th, 1776, I and many others know that was not the day America was "born," since we did not become a nation then. While we celebrate the anniversary of the Declaration of Independence on July 4 (it should be July 2) our nation was not created as a functioning entity with a central government until quite a few years later.

As I've written in prior posts on this subject, though we can know when a human being is born (first breath), finding the birthday of a nation is a much different thing. This is the realm of the field of Astrology known as Mundane, or Political Astrology.

In Mundane Astrology, to know a city or state's birthday, we usually take a city's incorporation date and the day a state is accepted into the "Federal Union" as its birthday. So in the case of the US, the birth charts of the states are always for when they ratified the Constitution, which is the qualification for becoming one of the United States.

In a national chart it's the day when the nation's current form of government came into being. Thus you can see that nations can have more than one "birth chart," as many nations have adopted many forms of government across the centuries. There's also the distinction of the sign that traditionally rules "a people," as opposed to when the government came into being. For example, the Chinese people are generally considered to be ruled by Libra, even though the government in Beijing is a Scorpio.

An aside - when people come to me for sessions related to where they should move, I always take the charts of cities, states, and nations into account rather than Astrocartography, which I believe operates from several flawed assumptions. I have not found astrocartography to be reliable. That said, how our chart relates to a city's chart, or a state's chart, or a nation's chart, can be read using a combination of techniques from synastry and return charts. There are also other non-astrological means that help us know what to expect if we move to a given place.

Astrologically, when it comes to locations, it's important to remember that simply because we have favorable Venus or Jupiter influences in a place does not necessarily mean it'll be good for us. Just because we assume that certain contacts are favorable, "it ain't necessarily so."

Here real world conditions often make or break it for us in any given place more than any astrological contacts. For example, if you cannot take the heat, don’t move to a desert region. If you can’t take the humidity, don’t move to a place that’s wet most of the time, even if your Jupiter is well aspected. That might indicate a lot of water rather than opportunity!

Anyway, let’s get back to the chart of the United States of America.

Historically, the Declaration of Independence of July 4, 1776, was a consensus document declaring that 13 separate colonies agreed that they weren't going to live with certain oppressions any longer. Even there, it seems we should be celebrating July 1 or 2, since those days were when votes were taken and the Declaration passed. But Adams wants unanimity, and so while he thought July 2 should be our independence day, they had to wait until all delegates from all colonies could cast votes affirming the Declaration, which was on July 4.

So the DOI was not a document of a Federal Government in-the-becoming. It also seems the first vote on the Declaration happened at 6:26 pm LMT on June 28, 1776, and there were several draft changes between then and July 4. The vote on July 2 had almost everyone voting for it except for some delegates who either weren’t there, or didn’t receive permission until July 3 or 4. It then had to be authenticated by Hancock's signature, and the first copy wasn't released until later.

Some years ago I published a very good article written by a very good astrologer full of scholarly reasoning and facts around the birth of the US government. It offers arguments as to why we must use either the chart for the Articles of Confederation or the ratification of the Constitution as the true birth chart for the US.

After years of studying various charts to see correlations between those charts and national events, I am of the opinion America's "birth chart" should be the one for when the Constitution was finally agreed upon before it was sent out to the individual states for their ratification. That makes our birthday September 17, 1787. The Articles were a prototype for the Constitution, but didn't include certain key clauses the Constitution contained that moved us from an inter-colonial agreement into a relatively unified Federal Republic.

Anyway, here's a bit from my original article on the subject, back when I still entertained the possibility that the date for the Articles of Confederation might still be in the running as a national birthday:

There is a tremendous debate among astrologers as to when on July 4 the document was signed, but to me that doesn't matter. For years I used the Declaration of War chart done for July 6, 1775, as the "birth chart" for America, since that was the first point of organized union against the form of government imposed upon the separate and whole group of colonies. But after a while, I got to contemplating that though I found the July 6 chart valid in some ways, it still doesn't describe all this nation is.

So I did some research, and found that statistically, in terms of "hits" correlating to significant historical events, there are two outstanding charts for the founding of our nation. One is the chart for The Articles of Confederation and the other is the chart for the ratification of our Constitution, which is the supreme Law of the US.

Astrodatabank used to have a great summation of the pros and cons of the many charts considered to be the "birth chart" of the US, but the original page no longer exists, and instead, here's what's currently offered there: AstroDataBank. It makes it clear that the birthday of the US, and even the signing of the Declaration of Independence, isn't July 4, 1776, for all kinds of historical and astrological reasons.

From the site, re: the signing of the Declaration: “There is near certainty that the declaration was not actually signed until it came back from the printer, sometime in August. As for the hour, the official journal indicated Congress convened at 9:00 AM, debated and quickly adopted the declaration and then went on to their other work.”

From the site: Signing of the Constitution

Birth Date: 9/17/1787, 11:29:00 AM, Philadelphia, PA. "The data is for the signature that finalized an adoption of the present U.S. Constitution subject to ratification by the individual States. The... Constitution was declared effective as of March 4, 1789."

"On July 24, the convention named a five-man Committee of Detail to sort everything out and draft a coherent summary of all the votes. After nine days, they adjourned and Washington went fishing. The dwindling collection of delegates picked a five-man Committee of Style and Arrangement to undertake the actual writing of the Constitution. Although they were not supposed to change the substance of what the convention had so far decided ... all five were strong-government advocates. The actual writer was Gouverneur Morris, who re-wrote the original to read, "We, the People of the United States ...."

"When the committee presented its constitution on Sept.12, the delegates eagerly began trying to change things all over again... The changing continued right up to the scheduled closing day, September 17, but three delegates ... refused to sign. Franklin still had doubts and reservations, saying "I consent, sir, to this Constitution because I expect no better." Still ahead was nine months of bitter debate before the necessary nine states ratified what had been written that summer in Philadelphia. Ahead lay the creation of the Bill of Rights... but it was on the 17th of September 1787 when Washington wrote in his journal, "The business being closed, the members adjourned to the City Tavern to dine, after which... retire to meditate on the momentous work which had been executed."

From the NCGR Journal, "Legal Inception of the U.S. Constitution,"

If you want to peruse the entire original 2007 article, along with the time of the Articles of Confederation, here's Happy Birthday to the United States of America - Or is it? The comment stream is all over the map, but informative and thought-provoking. I've caught one or two errors since then, but it was so long ago it doesn't bear editing at this late date.

On a final note about July 4, from the link at astrodatabank we are told the Declaration of Independence was not signed July 4! “There is near certainty that the declaration was not actually signed until it came back from the printer, sometime in August. As for the hour, the official journal indicated Congress convened at 9:00 AM, debated and quickly adopted the declaration and then went on to their other work.”

For more information about how the "Committee of Five" (Adams, Jefferson, Franklin, Wilson, and Livingston) came to create the Declaration of Independence, you can find more from wikipedia at Committee of Five. 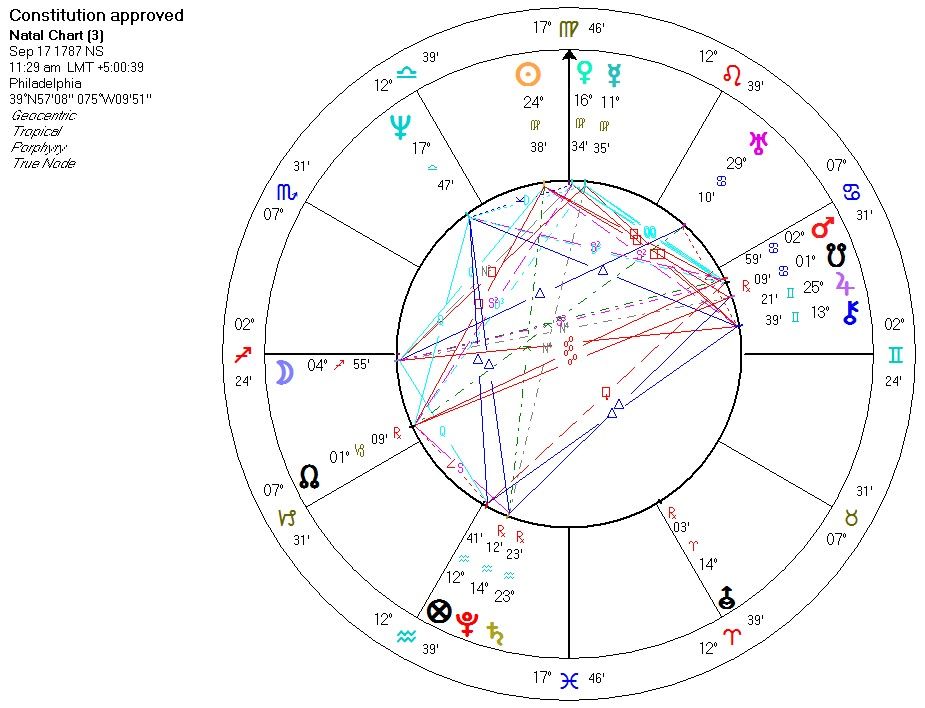 (click on the chart to get a larger image) Or you can go to these links:

Chart of the US Constitution
US Constitution plus progressions to July 4, 2010 You can estimate how much it's progressed since then using normal techniques. 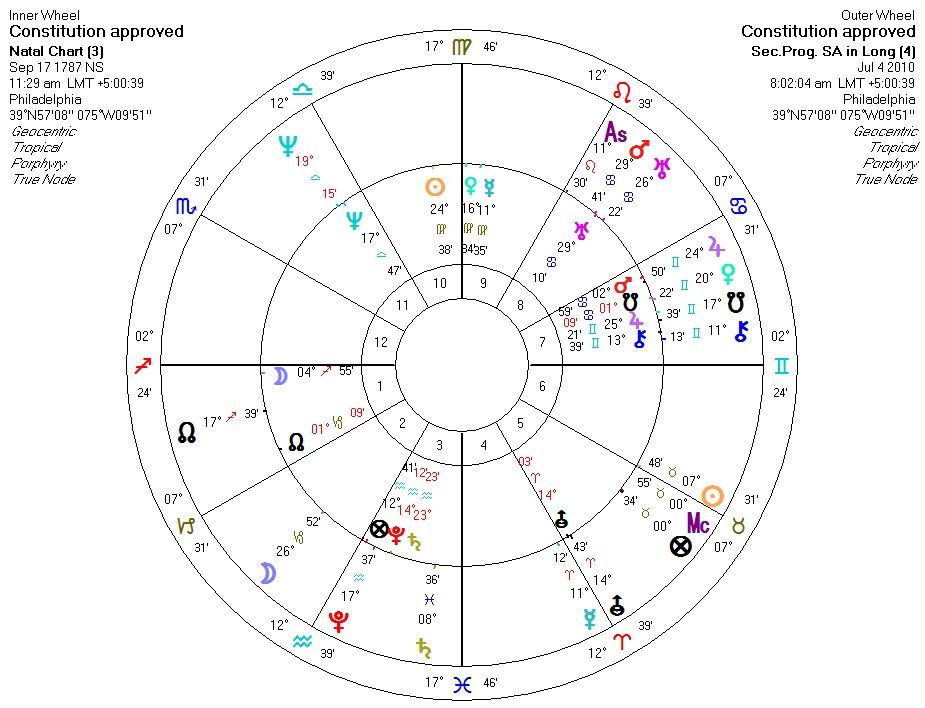 We have 1921 guests and no members online