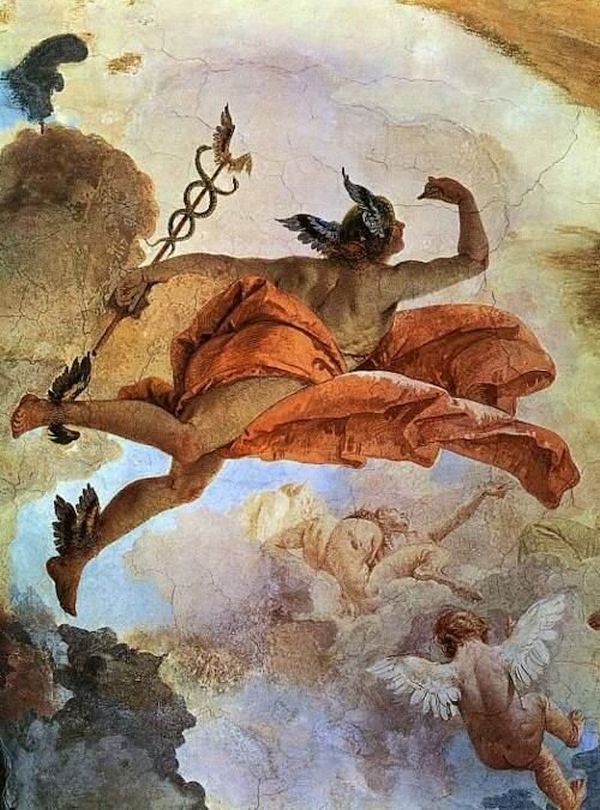 Hope is not blind optimism. It’s not ignoring the enormity of the task ahead or the roadblocks that stand in our path. It’s not sitting on the sidelines or shirking from a fight. Hope is that thing inside us that insists, despite all evidence to the contrary, that something better awaits us if we have the courage to reach for it, and to work for it, and to fight for it. Hope is the belief that destiny will not be written for us, but by us, by the men and women who are not content to settle for the world as it is, who have the courage to remake the world as it should be. ~ Barack Obama

On Saturday, February 20th, Mercury will make its direct station at 11º of Aquarius, within a few mere degrees of Jupiter. It had its sights on stalwart and reality based Saturn, but has now stalled for its about turn, and is heading back to Jupiter. Optimistic, and hopeful Jupiter. This apparent path of Mercury creates this 90 day cyclic dance, that makes it seem as if Mercury is weaving and pausing, and flitting across and behind the Sun. These stations of Mercury have been noted by astrologers to coincide with the advance and retreat of commerce, travel and the affairs of human kind. It has also been seen to coincide with our states of mind.

On January 30th Mercury stationed for its retrograde dance. This can feel like a withdrawal, a retreat from the affairs of Mercury, from planning, commerce, commitments and communications. It commenced a period best used for contemplation, reflection and the assimilation and processing of information and experience. On February 8th, Mercury made its Inferior Conjunction with the Sun, which is similar to the commencement of a New Moon phase for Mercury, beginning a new Mercury cycle. From this date until now, new incipient thought seeds were being sown. During this time Mercury is so close to the Sun that it is invisible in the night sky, and only makes its appearance again as a morning star one week after its direct station, at the end of February. It is in this dark latent time of Mercury that these seeds are being set.

Now that Mercury will station direct, we go through a state of reorientation. Similar to when we wake after a restful sleep, our minds and our perspective is gradually adjusting to what we usually refer to as our normal state. Those seeds that were planted and beginning to germinate in the darkness of the New Mercury cycle, will soon begin to grow. It is well nigh time to regain our perspective and look forward again. And as more information is revealed we can then put the pieces of our lives back together. We can begin to plan again.

It is one week after this direct station, when Mercury rises as a morning star, and begins to pick up speed, that some sort of plan of action based on these incipient seed ideas have the greatest potential for growth and success. This is considered to be the best time to make commitments, sign papers, buy that new vehicle, and make those important decisions. This appears to be all the more fruitful thanks to a repeating conjunction to magnanimous and abundant Jupiter. Mercury will make the last of these 3 conjunctions to Jupiter on March 4th. Simultaneously, Mercury and Jupiter will be trine (resonating), with the Nodes of the Moon, the eclipse points, making these seed ideas all that much more relevant to our ever-evolving sense of purpose and destiny.

Like a door opening out on to the world at large, we are being asked to step through to the other side. Not to just timidly peek through the keyhole, but to actually walk through the doorway. And so, if you were to fulfill your own potential, if you were to improve your life in some simple, or perhaps more adventurous or daring way, what would that look like for you? No one is telling you to walk through your own door. No one demands that you ‘do’ anything. But it would probably behoove all of us to step back and take inventory at what we are able to do to improve our outlook, our perspective, our lives,  our beliefs, our potential, our hopes for the future. Our world is daring to get a little larger. And all we have to do is step through that door.

“Curiouser and curiouser!” cried Alice (she was so surprised that for the moment she quite forgot how to speak good English); “now I’m opening out like the largest telescope that ever was! Good-by feet!” ~ Lewis Carroll

Through Mercury/Jupiter we are being given an opportunity to appreciate the vast potential of our minds, both individually and collectively. This is a good time to step back, and look at our lives from a higher vantage point. If you were to have a Big Vision that you would like to achieve, what would that look like for you? And what would you want to do to expand your horizons?

Your Big Vision: Use the weeks after the Mercury station to launch your big vision for the future. The days following the station on the 20th are great days for business, making mutually beneficial agreements and negotiating.

A New Perspective: Differences can be ironed out more easily, because we are better able, and more willing, to see things from another’s perspective. It is also an excellent time to expand your knowledge, ask questions, learn something new, and broaden your horizons. Follow your interests, satisfy your curiosity. The more you know, the better informed you are, the wiser will be your decisions.

Good news: Mercury/Jupiter brings a feeling of optimism and hope for the future. This positive outlook brings us the incentive to try new things, and the initiative to plan ahead with the right attitude.

Watch out for: The too muches. This is Yes weather. We agree to everything and anything, assuming it will all turn out for the best. If exaggerated, it can find us over-extended, over-committed, scattered and overwhelmed with busyness and trying to juggle too many things. Use the proximity of Saturn to know your limits, and know what is being asked of you. Then, if you decide it’s a good deal and it’s worth it, go out and make your dream a closer reality.

We have 1936 guests and no members online