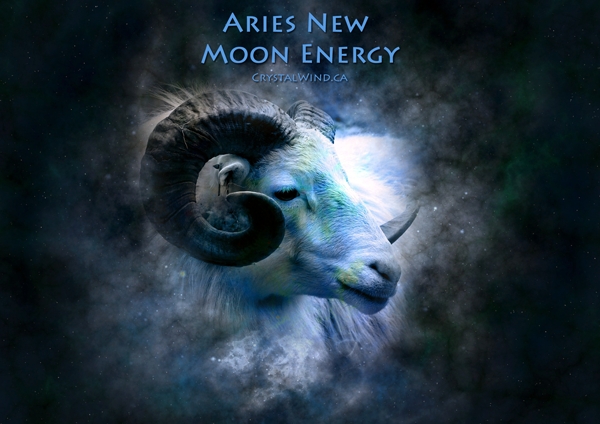 With the arrival of Aries we have indeed arrived again at the place of our beginnings, having traveled another cycle on the spiral of the creative process ... from the initial thrust of new efforts and undertakings in dynamic, assertive Aries last year to the spiritual enlightenment, dissolution, acceptance, and release of Pisces last month. We are wiser at least for the experience of the journey.

In the natural sequence of events, as opposed to the one described by the traditional calendar, the real starting point begins here ... with the New Moon in Aries, by definition the first New Moon in the Spring. Whatever your sign and wherever Aries is placed in your Natal Chart, this moment of renewed alignment between your sense of personal direction and your sense of emotional commitment marks the place where action begins for you.

The New Moon in Aries describes a time of rising ambitions, pioneering interests, personal assertion, competitive spirit, and self-promoting enthusiasm. Aries energy is adventurous, aggressive, direct, courageous, independent, initiating, vital, enterprising and passionate. It is built for moving forward and taking action now! Let's say it's a little bit pushy. People who embody joyous, exuberant Aries energy are also all these things. And, let's admit it, they, too, are "a little bit pushy."

However, it's been said that no progress happens until people are willing to kill each other if something isn't done. To civilized ears, that may sound a little extreme. But maybe it takes the pure Warrior energy of Aries to prod the world's inertia off Square One and start the process of life itself moving forward. No doubt about it, Aries can meet the challenge.

The first and most emphatic of the Fire Signs, Aries is the pioneer ... ready to explore and conquer new frontiers, the adventurer ... deciding to scale the earth's tallest mountain "because it's there," the knight-errant of the Zodiac ... with, we hope, a little more sense and focus than Don Quixote. Aries is the spirit of Braveheart ... the warrior / lover, endowed with courage and passion that literally define the words.

The executive charisma and vibrant leadership that bloom eventually in Leo and the respect for solid, ethical foundations and the love affair with the far horizon that are intrinsic to Sagittarius' character have their origins here, in the roots of Fire Energy ... and the quintessential Aries proclamation, "I am."

Yes, indeed, Aries is ... unmistakably itself. And the world will never be the same. But for that, perhaps, the world might not exist. In the audacity and courage of Aries is the impulse to try that which has never been done before, and the confidence that somehow it will succeed.

As the first step on the continuum of the creative process, Aries looks at raw potentials and possibilities, draws on the subconscious wisdom of its own foundations in mystical Pisces ... conceives the new vision of what could be and decides, "Let's go for it."

Philosophers everywhere, from Goethe to Emerson to the unknown authors of The Bible, have recognized the primal power in such a declaration of purpose. At this point, literally, the cosmos moves to sustain this new intention ... this expression of life supporting itself.

When, truly, you realize the power behind genuine determination, you also realize the awesome responsibility it carries to choose your battles and your investments wisely. What you create should deserve to survive, and moments of appraisal and evaluation of what has been wrought so far, how it is developing, where it should go next, what functions it can fill, how it can be fortified, and what benefits it provides are built into the energies of the subsequent signs, all of whom will make their own additions and contributions as the nascent production progresses to completion.

For all its virtues, and they are considerable, Aries energy still contains shadings of the savage, the untutored energy of the Id --energetic, blunt, tactless, combative, persistent, and self-centered. When provoked it can resort quickly to angry, hostile response ... and seems to take to heart as a tenet of living the idea that the best defense is a good offense. It can (and often does) strike first and ask questions later.

It is notorious in its refusal to back down from a fight, and is unequalled in the entire Zodiac for sheer "scrappiness." When you consider the rough, and sometimes brutal, circumstances it was designed to handle, the reasons why become obvious. Still, it takes a bit of polishing for Aries to fit well in the context of "civilization" ... and the truce between the two is always uneasy at best.

Aries carries an unrefined restlessness at its core ... and too much "peace and quiet" can make it edgy. Few signs in the Zodiac can truly relish the excitement and exhilaration of risk and combat the way Aries does. There is something about a good fracas that gets the blood pumping and reminds Aries how wonderful it feels to be alive.

Deep in its soul is a competitive, impatient, willful fighter that loves to win, that lives to win. And in the aftermath of the melee, as the heat and dust of battle subside ... the joyous howl of victory that rises up and rattles the stars is like no other moment of glory for Aries ... the mighty shout of triumph for having turned in another fine example of what it was meant to do, and lived to savor the sight. There will always be something untamed in that spirit.

In calmer, more coordinated surroundings, Aries is still identified by its zealous self-confidence, its readiness to express unvarnished opinions, its willingness to act on impulse -- to seize the passing opportunity and make those resources deliver results, its ability to offer bold leadership and provide the strength to keep an endeavor moving onward to completion, and its independent, self-starting manner that prompts it to act on its own design to achieve its desires and "do whatever it takes" in the service of that cause.

Clearly this is an energy "born to accomplish," and without its inspiration and gusto, the creative urge goes nowhere. Deprived of the spark of Aries fire, there is no genesis. Creation dies in the cold, dark, watery mists of unborn possibilities.

So, there is a stunning honesty in the true Aries character, and a forthrightness in the personalities of those who carry this energy into the world, that can be troublesome and offensive to signs that are more concerned with etiquette and collaboration. Like Libra -- the polarity sign for Aries in the Zodiac, the sign whose energy embodies the "opposite qualities" ... which can, indeed, act as a powerful attraction between the two components.

Libra wants things to be "nice," cooperative, harmonious, sociable, and even "cultured." Libra places emphasis on teamwork, partnership, and living by "rules that are fair to everyone." Aries knows the rules of "warfare" are rarely polished to this extent ... and while belligerence and the infamous determination of this sign are somewhat excessive in the confines of polite society, it is still an energy that cannot be eliminated, overlooked, or repressed without some dangerous consequences ... for everyone.

Repression of one's personal Warrior energy is a recipe for disaster, and a species which can neither assert itself to obtain what it needs to continue nor defend itself from harm isn't destined to survive. As much as we like to focus on peace, brotherhood, and serene co-existence as a way of life, well-integrated and appropriately applied Aries energy is an integral part of what makes that even possible.

When this kind of energy is not well-integrated into a personal chart, or when it conflicts with more preferred strategies, it results in action that is provocative, angry, reckless, impatient, disruptive, unsympathetic, self-willed, uncooperative -- even brutal, violent and dangerous. It can also produce apathy that approaches catatonia and other mental diseases, often as part of severe clinical depression.

With the arrival of the New Moon in Aries, the theme of life's creative cycle -- and the focus of people in general -- becomes more aggressive, direct, competitive, and intense. After the relative dormancy of winter, with its emphasis on consolidation, fortification, and future planning, people begin looking for ways to move assertively toward new goals and fulfill the new ambitions they've envisioned as dreams that are finally, perhaps, possible.

They become more forceful, vigorous, energetic, self-initiating, pioneering, and bold. With the arrival of Spring with all its untapped capacity for new growth and new life, they are ready to take some risks, declare their desires, and "lay it on the line" for the chance to succeed. There is an alignment of ego interest and emotional commitment that is direct, blunt, emphatic and concerned with winning. For sure, the sap is rising once again.

On an individual level, therefore, there is extra emphasis on self-assertion, expressing your intentions and pursuing your goals, making an impression, getting noticed, and "taking on the world." You may also be concerned with leadership issues, making progress, "getting your own way," standing up for yourself, and "taking care of Number One."

Unfortunately, so is everyone else in the world. So you can see where the roots of contention have already taken hold and why conflict may erupt more readily now than at other points along the way.

You may also feel more energized, enthusiastic, and self-assured. Warrior energy is nothing if not confident of its ability --maybe even its right -- to prevail, whatever the struggle. It is a good time to express ambitions, to initiate projects, to take action toward achieving personal goals, to provoke change in the circumstances around you, and to make your feelings known to others. (You may not be able to help yourself, but expect others to return the favor!!)

This is the time when life and your deepest yearnings hover right behind your shoulder, whispering the seductive mantra, "Go for it!!" And the urge to do so may be overwhelming. In fact, new philosophical insights that come available this month may offer some substantial changes in the rules you live by ... enough to open up options that you might not have considered before.

We shall not cease from exploration
And the end of all our exploring
Will be to arrive where we started
And know the place for the first time.
T.S.Elliot
Four Quartets