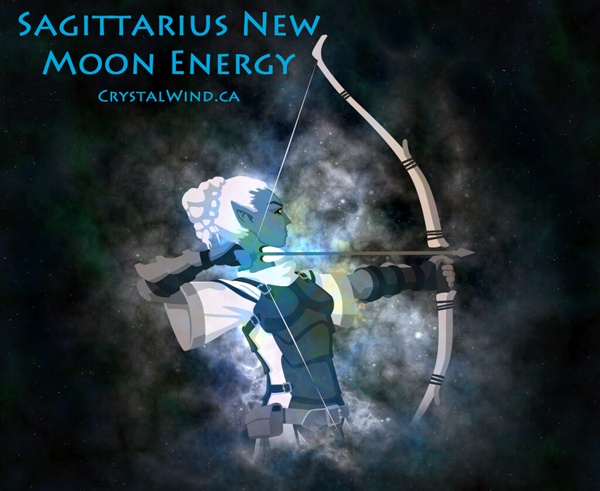 As the creative cycle of life continues its progress of development from Scorpio into Sagittarius, we move from the consolidation of mutually shared resources and assets ... into finding expansive new horizons of adventure and knowledge to investigate and opportunities to offer our own generosity to others with the results.

Having combined our assets, talents, possessions, abilities, additional income, and other investments with those of our partners -- we have assembled structures, products, and benefits beyond what any of the contributors could have fashioned on his own. Now, it's time to offer these new creations out abundantly into the world and gather in the gifts of even more collaborators to enrich the existing social order.

That's where Sagittarius energy comes in.

I've mentioned before how the energy of each succeeding sign seems to be a reaction to the excesses of the one that went before. One of the clearest examples of this is the difference between secretive, controlling, sometimes power-obsessed Scorpio energy ... and the candid, open-handed, free-wheeling expressions of Sagittarius at its best.

Sagittarius wants to share what it has learned through the practical experience of living and acquiring education ... with other people, other schools of thought and theory, even other countries and cultures.

Sagittarius is a natural teacher -- as well as a natural traveller. Like the explorers of centuries ago, Sagittarius has its sights fixed on the far horizon and its mind on greener pastures, new vistas, and greater adventures.

Sagittarius codifies the information and knowledge it has gathered into laws, philosophies, religious doctrines, systems of ethics, and academic disciplines. Then it demonstrates -- sometimes in formal classroom and teaching forums; sometimes through writing, lecturing, publishing, and preaching; sometimes in concocting the hair-splitting, tedious fine points of religious dogma or legal debate; and sometimes through the simple integrity and honor of living life in accordance with its deepest beliefs -- what it knows and what it believes will benefit both local society and the rest of the world.

One thing about Sagittarius: it does nothing half-way, small-scale or "on the cheap." It is notorious for expanding everything it touches, from intellectual and material resources to its own sphere of influence.

This is the energy of the one-eyed man in the Kingdom of the Blind ... the crusader, the explorer, the missionary, the theologian, the true believer, the zealot. Sagittarius has an unshakable, abiding faith in the power of knowledge generously presented to improve the circumstances of human life and bring the global family together in one homogenous fraternity.

Where Scorpio controls the different elements of its personal passion ruthlessly -- sometimes even without permission -- and never with apology, to create what it believes is needed to advance the procession of evolution, Sagittarius employs the power of persuasion, champions the ability of truth to achieve enlightenment, and relies on the effectiveness of generosity to bestow its bounty and knowledge on the world.

Or it likes to believe it does.

But the insertion of Sagittarian ideals is sometimes not nearly so noble and uplifting in practice as in the dreams of a pedagogue with an axe to grind.

At its best, Sagittarius energy is friendly, outgoing, extroverted, optimistic, honest, and upbeat. Its positive outlook and straightforward approach often wins a fair hearing for its "message" by sheer force of personal charisma.

As the third member of the fire sign triad, Sagittarius believes in the potent force of personality as a tool for converting the rest of the world to its own particular "truths" ... and uses it with enthusiastic vigor. It has the ardor, initiative, and persistence perfected in Aries, the razzle-dazzle salesmanship of Leo, and the intellectual acumen of its polarity sign Gemini to draw on for expression.

Sagittarians are independent, restless, freedom-loving folks. The theme song for their sign might well be "Don't Fence Me In." They thrive on the adventures of new situations and new cultural settings.

More than any other sign they may number "foreigners" among their friends, associates, or business contacts; live in (or at least travel in) foreign countries during their lifetimes; assimilate "foreign" philosophies, knowledge, and viewpoints into their own "larger picture of life;" and perhaps be romantically involved -- or even married to -- someone with a "foreign" background.

The eclectic mix that results can be a fascinating montage of different spices, combinations, and possibilities.

Sagittarius energy is smart, perceptive, well-educated -- though often largely "self-educated" ... because the people who deal with it are usually breaking new ground when it comes to discoveries, theories, insights, and the organization of all these different pieces into a comprehensive world-view.

They disseminate the vital treasure of what human beings know, believe and live by ... to promote the course of social growth and change.

It is known for its idealism, its concern with social issues and matters of social conscience, its willingness to "keep an open mind" when it comes to new knowledge and thought, and its trademark sense of humor ... which keeps life from becoming far too straight-laced and pedantic ... considering some of the topics contained in the wide-range of interests the sign is known to cherish.

It is one of the two most notably "future-oriented" signs -- Aquarius being the other, and as such the people who express it are concerned with the course of the "new generation" ... and with the legacy they themselves will leave behind as accumulated abstract wealth on which others can rely.

People with prominent Sagittarius placements are the world's scholars, teachers, writers, theologians, jurists, and philosophers. Fortunately they are not daunted by the monumental scope of the tasks to which they commit their energies, over and over and over. They are people of vast vision and energy to match -- and whatever job they see needs doing, they are confident it can be done. So they roll up their sleeves and get started ... and often change the course of destiny for their efforts.

When this energy is not well-integrated into a personal chart, or when it conflicts with more preferred strategies, the results show themselves in actions and attitudes that are extravagant, pretentious, hypocritical, dishonest, undisciplined, inflated, and irresponsible.

Intemperate or stressed Sagittarius energy will have an unjustifiably high opinion of itself, a self-righteous tone that is mighty offensive to deal with, a habit of taking on, committing itself to, or promising things that it has no ability to or intention of honoring. It is tactless, dogmatic, fanatical, and lazy.

We have 838 guests and no members online