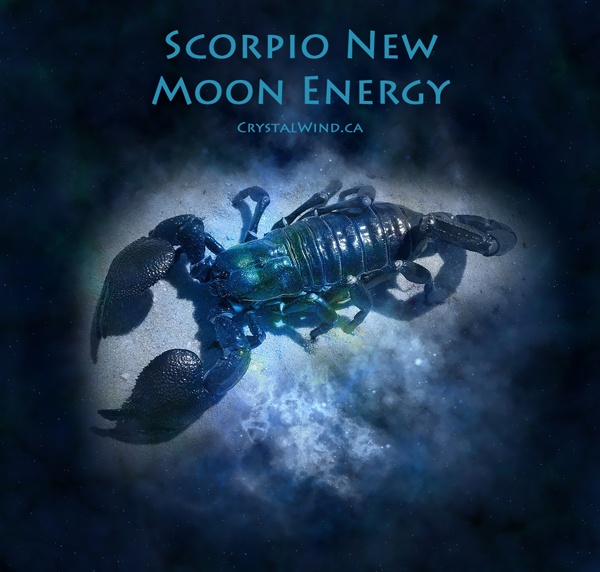 As the New Moon cycle moves into Scorpio, we start to consider some very profound issues and ask some searching and complex questions. Having formed partnerships, relationships, and associations in Libra ... what use can we now make of these additional resources? What can we do with the assets, talents, possessions, abilities, additional income, and other advantages partners offer?

In some ways, the frankness of these interests may sound unfairly conniving or manipulative ... and pure Scorpio energy, even at its best, is often misunderstood for this reason. Be that as it may, this is the phase of life and the creative cycle that is receiving focus now. With the acquisition of partners -- and the communal properties found in relationships -- come some complicated responsibilities, which Scorpio energy takes very, very seriously.

When functioning as intended, Scorpio energy is built to fashion "improvement" out of what currently exists. It is often an elaborate and awesome task -- and the people who carry Scorpio energy well, are indeed complex and awesome people. It is not an easy job, the labor they've agreed to perform -- and it is often quite thankless besides ... because of the methods they must sometimes employ, of necessity, to get things done.

Scorpio energy is built, as I said, to combine its own existing abilities, talents, assets, and visions, with those of partners and allies, to create something better from the raw materials of structures, situations, associations, etc., that have outlived their useful function and therefore need to be recycled -- torn apart and rebuilt.

Scorpio conceives the vision, assembles the necessary elements and ingredients, and then sets about building -- according to the potentials now contained in the mixture, and following the blueprints of its own fierce ambition -- to bring this new, essential creation into being.

To put it as kindly as possible, Scorpio energy deals explicitly in the primal theme of destruction and resurrection -- death and rebirth, which is another reason it is often treated with caution and carefully kept at a distance by the other signs. It's not just a matter of their being too faint-hearted or sentimental to deal with the difficult necessity of death as a part of life.

Sometimes, the awe accorded to Scorpio energy comes even from the wise and enlightened souls who understand the intense, difficult objectivity needed to handle this phase of existence and creation wisely.

In this constant struggle for improvement and replacement of "what exists now," Scorpio energy incites upheaval and change. It is literally revolutionary as it works to forge the fundamental and permanent transformations its visionary ambitions mandate. Scorpio energy understands -- and works with -- life and death issues, and life and death cycles.

Without dissolution there is no possibility of a new beginning ... and in each new beginning is the seed of the eventual disintegration back into elemental materials from which more new expressions will rise and evolve in their turn.

Scorpio energy deals with investigations, mysteries, the ferreting out of hidden information, and the unravelling of answers to secrets. Scorpio people therefore almost always contain an aura of mystery themselves, a hint at the deep and private spiritual nature that resides at the core of their beings.

Scorpio energy is passionate, powerful, secretive, solitary, and not easily known. Scorpio energy is deeply feeling but extremely private. It keeps its own counsel and prefers to mastermind the alliances it forms, rather than work cooperatively or in equal partnerships. It may not even share with the contributors it "uses" knowledge of the ends toward which it is working, which adds to its reputation for being willful, covert, and even sneaky.

All those adjectives may be well deserved (as will be some others we will mention in closing) ... but none of them are apt to touch a Scorpio conscience into altering its tactics or modifying its insistence on having its own way.

Scorpio actions are deliberate, premeditated, and purposeful. Not without cause is it known as the most intractable and self-willed sign in the Zodiac.

It is also famous for being the most markedly sexual sign -- not romantic, but blatantly and bluntly sexual, which makes sense when you go back again to the abstract essence of Scorpio's nature as an artist whose medium is primal creativity. Indeed, sex is the process in which disparate elements from separate contributors are combined as raw materials to create "something where nothing existed before."

This, of course, is biological creativity ... which is only one of the planes on which Scorpio works ... and excels.

Scorpio energy is resourceful, judgmental, controlling, possessive, and capable of great endurance. It is known for inciting dynamic action, and for employing extreme measures in pursuit of its goals. Scorpio deals in permanent changes, often fomenting chaos and crisis as it "does what needs doing" ... without qualms and without flinching. It is built for handling emergencies and surviving desperate situations.

It has an unshakable sense of its own immortality ... and is often harder on itself (if you can believe it) than on those whom it uses for its own ends. Scorpio energy can (and often does) behave as a law unto itself, so convinced is it that the ends toward which it moves can justify the means of arriving there.

People with prominent Scorpio placements often lead very complex, traumatic lives, marked by extreme circumstances and frequent "life and death" turning points and decisions. They are known for working through extraordinary life phases which often result in "new incarnations" of themselves, stages whereby "what used to be" ceases to exist ... almost as completely as if physical death had occurred ... and "something new comes into being" which often amounts to a complete personality change. They do nothing halfway ... and they embody an indispensable component of human spiritual evolution.

Scorpio is Fixed Water ... and is therefore known for all the willfulness and immovability of the Fixed sign quality and all the passion and creative drive of the Water element. The polarity sign for Scorpio is Taurus -- Fixed Earth. And in that spectrum of interests resides the sensitive and age-old question of ultimate ownership: What is yours? What is mine? And what is ours? Many a bloody moment has been sparked by the answers to those questions at one time or another.

With the arrival of the New Moon in Scorpio, the theme of life's creative cycle -- and the focus of people in general -- become more intense, earnest, and resourceful, as befits the important business at hand. They value behaviors and methods that are probing, focused, and aimed at doing "research" or uncovering unknown information.

There is also emphasis on self-improvement, on regeneration, on the use of sexual energy as the ultimate creative force, on themes of destruction and rebuilding, on involvement with unearned income and "other people's money" ... such as inheritances and investments, on community property and jointly owned structures, and on combining assets and resources with others to create something greater than either contributor could produce by acting alone.

They may also be concerned with mysteries, secrets, investigations, and bringing to light knowledge heretofore hidden or repressed. They are discarding things, ideas, structures, investments, projects, situations, people, and relationships that have outlived their usefulness or proved to be inadequate to the function they need to fill -- and replacing these things with improvements designed (and expected!!) to give better service.

This energy is known for displaying savage objectivity and for pulling no punches when there are tough choices to be made.

When this energy is not well-integrated into a personal chart, or when it conflicts with more preferred strategies, the results show themselves in actions and attitudes that are ruthless, destructive, severe, unreasonable, calculating, fanatical, abusive, unscrupulous, treacherous, vindictive, and violent.

Unbridled Scorpio energy on a rampage is notorious for acting according to its own desires and designs without consideration for the wishes, rights, or even fates of others unfortunate enough to "get in its way." It is horrifyingly self-contained, self-involved, and conscienceless.

© 2010-2022 crystalwind.ca. All rights reserved. We track all IP addresses with sniffer technology. Using a VPN will not hide your IP.

We have 852 guests and no members online