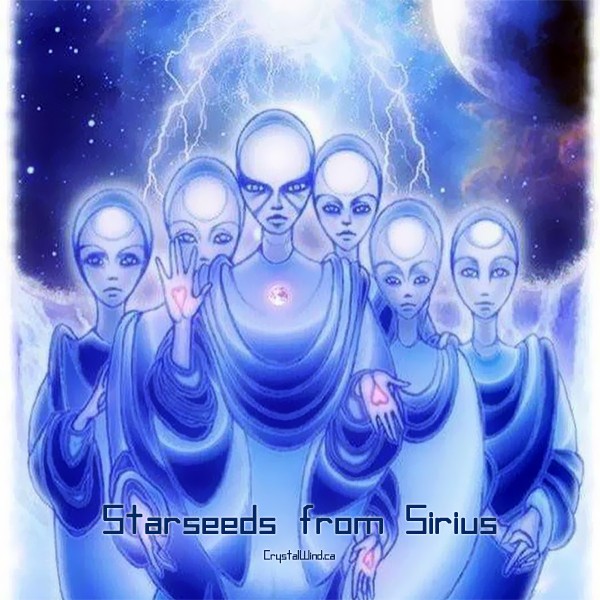 If you've ever dreamed of a sky with two suns, one larger and the other smaller, or were mesmerized by the red-orange sky of the setting sun, you may have subconsciously recalled the times when you lived in Sirius.

If you are attracted to the color blue or you like the color combination: blue-red, blue-pink or blue-amaranth, they resemble the beloved world of Sirius.

Starseeds of Sirius are very strong characters. They don't seem to know Fear, even though their Souls are gentle, kind, and sensitive.

They all work closely with Archangel Michael, who is a Warrior Angel carrying the sword of truth.

The blue color is associated with the Archangel Michael and every Sirius Being.

Sirians have this inner Strength, they know their Truth and are ready to fight for it!

Usually they are balanced, composed and calm people. They are hard to get to.

But if someone really crosses the line with them, that someone will be shocked and surprised to discover willpower, power, and the ability to fight for what they think is right in such a calm and quiet person.

Sirians love a simple and uncomplicated life with its simple pleasures. They are not interested in the polished facade and superficial details - beautiful clothes, an impressive house, jewelry, and an expensive car.

Their appearance is very simple. A lady gifted with great taste looks simple and elegant with a minimum of makeup accentuating her eyes, a smile, a sharp mind and a good heart.

Sirians have inquisitive minds and are hungry for knowledge.

As a child, little Sirian is quiet and serious with his nose in the book.

They are attracted by math, physics, full of their own original ideas, ask many questions and want to get to the bottom of everything to UNDERSTAND.

Sirians are the best scientists, inventors and teachers.

They are deep, quiet and serious.

Sirius Starseeds are usually loners, but they love it!

The typical Sirian is a thing in itself, an introvert who doesn't like socializing. They can make better use of their time!

They would prefer to be home reading a book (or blog) with their dog or cat.

But if you get closer to Syrian on a personal level, you will discover the funny side of them. They don't take themselves too seriously, they like to have some comedy and fun in their lives!

They are animal and nature lovers, they like dogs, cats, horses, large bodies of water and often dolphins.

Sirians - former inhabitants of Sirius B - can pursue a career in ocean ecology, guided by their passion for caring for the aquatic environment.

Dogs are also descended from Sirius, so sharing a life with a dog is so familiar and wonderful to Sirius.

Cats remind them of the Lyrians who fled their home planet after its destruction, and many found their new home in Sirius. Sirians and Lyrians have formed a strong bond. Lyrians are cat people. By incarnating on Earth in the human body, they retain the appearance of a small cat - eyes and nose.

Interestingly, sometimes the Lyrian incarnates on Earth as a real cat in order to support his close friend Sirian in his life mission.

The Sirians, like the Pleiadians, have succeeded in achieving a balance between the left and right hemispheres. They are intellectual, logical, and loving on the other. They are nice and smart.

But they love the entire universe rather than a specific person.

You can feel the energy emanating from Sirius as very calm, soothing, warm, embracing, nurturing and wise.

Speaking of the balance of yin-yang energy, femininity and masculinity - each Sirius Being carries the Divine Feminine within itself.

Despite the fact that the Sirians are Warriors, they are peaceful Warriors. So they managed to marry the left and right brains.

And they masterfully married Heaven and Earth.

Sirians have the gift of bringing the most complicated topic (also spiritual) to Earth and presenting it in a simple, logical and coherent way that anyone can understand.

Sirians feel that their Being is not limited to the boundaries of their physical body, but covers the entire universe from Alpha to Omega.

And their thoughts, emotions, words and deeds influence everyone in the world.

They know that they are ONE with every Being in the Universe, and even with inanimate matter.

Many Sirius star seeds lived in Ancient Egypt and still feel their hearts being drawn to pyramids and sphinxes.

Many are interested and want to visit Machu Picchu, a two-way portal built by the Incas, an ancient tribe of South American indigenous peoples.

The Inca ancestors, who were mainly Sirius Starseeds, came to South America after the fall of Atlantis and settled there.

Author unknown.
Please email us if you know them so we can give proper credit :)

We have 948 guests and no members online