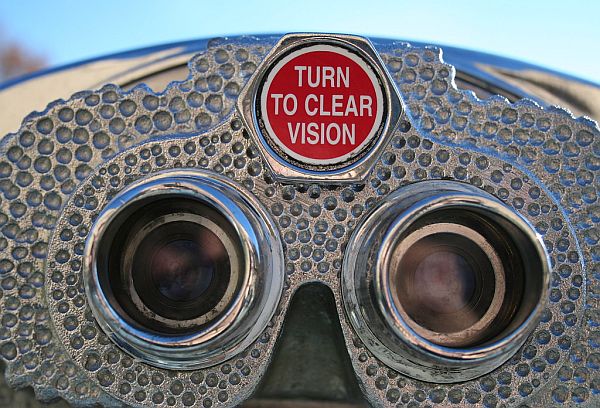 I was standing at the counter of a snack bar at a children’s zoo when a customer became quite nasty with the server. A part of his order had not been delivered correctly, and he made quite a stink. I recoiled, thinking, “What a mean, cruel person!”

Minutes later I was passing the deer enclosure, where I saw a man kneeling to pet a fawn, tenderly feeding the creature. “That man reminds me of St. Francis,” I thought. When the man turned his head, I was astonished to see it was the same fellow who had created the unpleasant scene at the snack bar.

Who was that man really? Was he the angry, abusive one, or the gentle, saintly one? We might say that he was both. He had the propensity for both kindness and mean-spiritedness, each aspect bubbling forth in different situations.

2020 is the Year of Clear Vision. This year we will see things as we choose to see them, not as we have been taught they are. We have been trained to use the fearful mind to gauge what is real. Yet all great spiritual masters have advised us not to judge. We tend to focus on one aspect of a person, usually a fault or limitation, and we box that person into a small identity. Yet judgment always backfires because there is far more to that person than the single dark aspect we are focusing on. If we were to see them at another time in another situation, we would see an entirely different, better person. When we hold a negative opinion of someone, we suffer because we have contracted our consciousness to the realm of the wrong, small, or missing. We further lose because in a judgmental mindset we become subject to our judgments about ourselves and those of others toward us.

If you hold a penny in front of your eye and look toward the sun, the penny will block your vision and you will miss seeing the huge star. How odd that a tiny object just an inch wide can obscure the physical energy source that feeds all living things! Likewise, every soul emits rays of spirit that bring us life when we look upon them. When we release judgment, we expand our vision to receive the unlimited good that wants to bless us.

It’s tempting to fall into agreement with judgments issued by others. When I was looking to purchase a property, a real estate agent named Tom told me, “Watch out for Jimmy N. He is a manipulative, unethical realtor.”  In the wake of that warning I avoided Jimmy N.; whenever I heard his name, my armor went up. Later I had to do a transaction with Jimmy, and I found him to be one of the kindest, most honest and ethical people I have ever worked with. He was mature, wise, and did honorable charity and service work. Tom’s opinion of Jimmy was entirely erroneous, based on his judgment only. In retrospect I was sorry I had adopted Tom’s opinion and unfairly judged Jimmy before I got to know him.

Earlier I stated that we embody both good and bad aspects. Yet ultimately only the good about us is true. A Course in Miracles calls us to identify only with the attributes of God. Because God is loving, kind, generous, and forgiving, that is who we are at our essence. Our true nature is innocent; all else is passing illusion. When we allow ourselves to get sucked into beliefs in smallness and evil, we suffer. Yet the pain that judgment engenders is not necessary. We can walk the high road and remain at peace.

Of course, people do foolish, cruel, and evil things. But only because they have succumbed to their own judgments and those cast upon them by others. Hurt people hurt people. It takes a victim to make a victim. Someone who recognizes his or her  innocence would never be tempted to hurt another person. Hurtful acts are not calls for more judgment, which perpetuates the vicious cycle. They are calls for love, which ends the vicious cycle.

The intellectual faculty judges constantly. From an early age we were taught to focus on differences, label everything, rank people and objects in order of desirability, and reject everyone and everything that does not get us what we want. What we really want runs far deeper than the judgments we hold. What we really want is inner peace. We will never find that peace by making wrong and pushing against.  Instead, we can drop into deeper acceptance, compassion, release, respect, and support.

Dale Carnegie advised, “Give that person a fine reputation to live up to.” This instruction serves not just the person you are praising, but empowers you as you see and claim the best in that person. As that person becomes the best in them, you will become the best in yourself.  Forgiveness is not simply a gift to the recipient. It is more fundamentally a gift to ourselves. This is the clear vision that will make our new year new.

Daily Angel Message - You Are Wealthy

The Creator - Lighting The Path...

Sliding Down Tunnel of Transformation