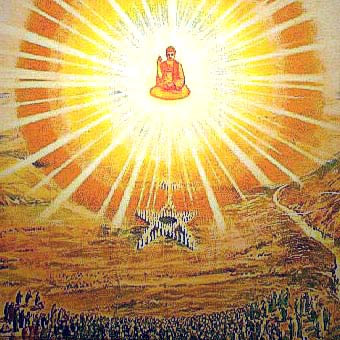 The following Wesak meditations written by Lucille Cedrecrans may be helpful.

Focus the consciousness in the cave and identify as the Conscious Soul Incarnate, pausing to contemplate the meaning of such identification.

Contemplate your relationship as a Conscious Soul Incarnate to your own instrument; your mental body, your astral body, your etheric body, and your physical appearance.

Via the etheric network, which interpenetrates and holds these vehicles in right relationship to one another, flood the whole of the instrument with particles of golden light energy, revitalizing and re-energizing the three-fold instrumentality, renewing throughout the instrument the life process – integrating its many frequencies, its energy, force and substance into a service unit which is responsive to Divine Will Impulse. Contemplate, direct, this action to take place within the instrument so long as it is needed, whenever it is needed, between now and the Wesak Full Moon. Sound the OM.

In recognition of the attention directed downward to humanity by the Christ and the Buddha at the actual moment of the Wesak Full Moon, in dedication offer your instrumentality and your consciousness as a channel or an intermediary to be used by these two great lives in their service to humanity. In complete humility, seeking nothing, in an attitude of offering, sound the OM.

Very gradually, relax the attention and return to the normal focus.

This particular subject is one about which there is little clarification. There are great cycles of approach, now entered into. In those cycles there are lesser cycles. During any one of these lesser cycles, manifestation is possible, depending on the power of humanity to invoke the appearance. There is choice. That entity has choice. When he has reached the place he will accept the higher concept, he will himself invoke the appearance. We are entering the period in which a lesser cycle such as the Wesak Festival could result in the reappearance of the Christ.

The reappearance of the Christ will not be during the Wesak Festival. A cause is set into motion and that cause manifests appearance. The factor of time is involved.

Please enter into a period of subjective work. Align with the World Group of disciples, become the focus for aspiration and as humanity, aspire to the Hierarchy.

Become physically relaxed and comfortable, emotionally calm and serene, mentally poised and alert, focus the consciousness in the ajna center and integrate the three-fold persona via the sounding of the OM.

Upon a line of light withdraw the consciousness into the cave in the center of the head and identify as the Soul.

Via a line of light upward through the head center, become receptive to an inflow of energies from Hierarchial levels, projecting these energies outward through the ajna center into the body of humanity as you receive them.

Now lift the consciousness from the cave in the center of the head to the head center and visualize yourself as a sphere of blue-white Christ light. Become receptive to the precipitating energies of the Divine Plan, radiating these energies in an ever widening sphere of light into the body of humanity on mental, astral and etheric levels.

Make the descent into the cave in the center of the head and repeat the following:

As a unit of the One Life, I take my stand with all forces of light to serve the Divine Plan for humanity in this time and place. May Christ return to earth.

Move outward to the ajna center and sound the OM.

For a few moments, as the Soul within the personality, radiate Love to all your Brothers. Relax the attention and return to your normal focus.

Reverse the Directional Movement of Meditation From Aspiring to Acting

I am going to ask you now to make an effort to overcome, or to supersede time and space, realizing that on Soul levels, you, within the Ashramic group life, took part in the Wesak ceremonies. You received, according to your point of spiritual development and your relationship within the group, certain basic concepts for which you, with others, take the responsibility of focusing into the body of humanity (that which you received along with these concepts) as well as the energies involved. And you will endeavor to embody them during the coming 12 months.

The major concept projected from the Hierarchial level through the many levels of the Hierarchy, into the consciousness of disciples in the field, at the time (the actual moment) of the Full Moon, was as follows:

Let the meditative life of the Soul become the breath of life within the instrument.

There are three major interpretations of this concept to be considered and embodied; and in that embodiment, focused into the life and affairs of humanity during the coming 12 month cycle.

The first of those interpretations is: Let meditation now take a new direction, and therefore a new form within the life and affairs of the human family. Meditation has heretofore, in its directional aspect, been primarily an aspirational movement upward, from the man in the brain, focused insofar as he was capable as Soul, to the Soul in the Ashram. This aspirational direction of meditation lifted the frequencies of the forces and substances of the body into tune, so to speak, with the overshadowing spiritual Soul. The directional movement of meditation has been upward toward enlightenment of the consciousness, the disciple aspiring to, seeking to know some higher aspect of Truth, some higher element of reality, some greater light.

Now he is requested to reverse the directional movement of his meditation from seeking, so to speak, from aspiring, to doing, to acting. During the past the Hierarchy has poured upon humanity through its disciples in the field, much enlightenment, much Wisdom – more in quantity than any incarnate consciousness could, at this moment, realize or grasp. Now the Hierarchy shall reverse the directional movement of its meditation from humanity to its higher aspect or focus, leaving the disciples in the world, the disciples in the field, with the responsibility of continuing that downward direction of meditation into the life and affairs of humanity. In other words, there will be an interlude within which the Hierarchy will not project concepts into the body of humanity through its disciples – an interlude of apparent inactivity between the Hierarchy and humanity. Disciples are being turned from the Hierarchy (if I may put it in those terms) into the body of humanity, and are being requested specifically, and with intent to focus their meditations downward and outward, rather than inward and upward. Take those truths which you have received through the years, which are now a part – a very vital part – of your incarnate consciousness, and through meditation, via action, give them to humanity. Let them become an objective activity within the life and affairs of humanity. This may be difficult in the beginning, for you are so used to seeking further enlightenment. Certainly maintain your alignment. Certainly endeavor to focus into your awareness consciousness of Soul, consciousness of the One Life; but as such, then, meditate upon a concept of truth which you already know – of which you are already aware – breathing it through your own instrumentality, via action, out into the body of humanity. Become the giver of that gift which you have already received. Let your act in the world of affairs – your every act – become your meditation.

This is the essence of the Wesak message to all disciples in the field. Two other interpretations follow this first one. They have been placed within the Soul consciousness of every disciple in the field, and will make themselves known to the man in the brain according to his grasp and application of this first one.

I give you reassurance the readjustment which you are experiencing can mean only growth. It does not mean retrogression. You are not standing still. But certain basic readjustments within your combined psychologies, and within the Hierarchial/disciple relationship are taking place which are vital to the resurgence of group life which will, in its own time, make itself felt.

In the meantime, let each one grasp the import of what is taking place, first within his own consciousness, within his own mind, his emotions, and finally within his outer life and affairs. Let him recognize the way in which these happenings are re-adjustments, Divine adjustments, to the manifestation of the Divine Plan for humanity, that humanity which he is, so that with the re-adjustments can come now a re-orientation, a recognition and realization of growth, of new abilities, of strength and of purpose.