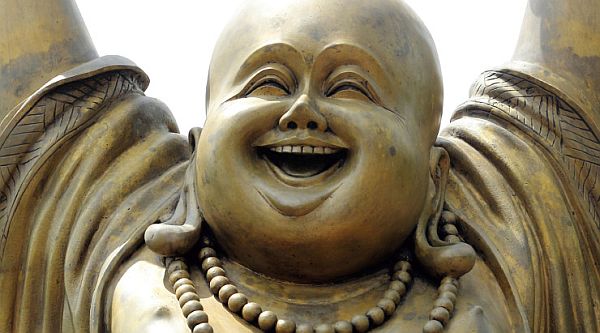 You are probably pretty familiar with the image of the big Buddha by now; the boisterous jolly fellow with the large protruding stomach who carries the name Laughing Buddha and who was in fact the inspiration for our Laughing Buddha collection. But who was this eccentric man really?

Originally he was named Hotei (in Japan) or Budai or Pu-Tai (in China) but he is best known as the Laughing Buddha. In China, people call him the Loving or Friendly One. His figure is based on an eccentric Chinese monk who lived over a thousand years ago and who has become a significant and popular symbol in Buddhist and Shinto culture.

Pu-Tai literally translates to “Cloth Sack,” which is reference to the knapsack that he was carrying with him. Pu-Tai was apparently a very kind, saintly and generous Zen master. His benevolent character was the reason why he was identified as the Maitreya, which is the Future Buddha. Furthermore, his generous smile gave him the nickname “Laughing Buddha.”

According to an ancient legend the jolly good saint used to go from one town to the other to fulfill his mission: spreading happiness and joy wherever he went. Pu-Tai was a charismatic character who drew people like a magnet to his presence. People used to crowd around him and he is often depicted with happy children. The monk was famous for handing out sweets and small toys he took from his cloth bag, after which he would put the bag down, stare up at the sky and start to laugh madly. His laughter proved to be very contagious indeed and before long all who had gathered around him would start to laugh as well. That would be the signal that his work had been done, he would pick up the bag and journey to the next village or town. And that was his method of spreading happiness and enlightenment.

THE POWER OF LAUGHTER

Pu-Tai was a man of few words, in fact he hardly ever spoke. On the few occasions that he did speak he would reply to questions about why he did what he did. He then explained that handing out sweets was symbolic for the notion that the more you give, the more you receive. His bag represented the problems all people encounter in life. Instead of clinging to them you should distance yourself from a problem by putting it down (just like he would put the bag down) and laugh at it, because whether you laugh or cry the problem is not going to change. The magic lies in the laughter and more precisely the power of laughter. Pu-Tai believed that the power of laughing made problems smaller and more easily to handle.

And the man had a very good grasp on things even a thousand years ago, because apparently when you laugh the body produces certain feel good hormones and enzymes. And when you feel good, you might look at your problems differently.

Pu-Tai lived a life of laughter and even when he died he pulled the biggest prank of all. When he felt his end coming near, the monk asked his close companions to immediately burn his body after his death. They were surprised because cremation was not a custom in Zen buddhism. But his wishes were granted and as soon as they set fire to his body, fireworks started to fly everywhere. Apparently he had hid a lot of crackers and rockets in his clothes in order to create laughter even when the matter was grave.

A Chinese custom is rubbing the belly of a laughing buddha statue to bring you good luck, prosperity and happiness.

Let us follow in the footsteps of a legendary monk and always remember his eternal wisdom: whatever happens we always should come back to laughter, because when you smile at the world, the world smiles back at you!