Wesak is an Eastern Tradition 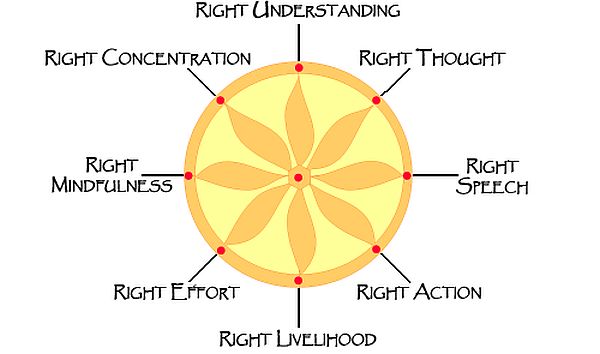 The Eightfold Path of Buddhism, also called the Middle Path or Middle Way, is the system of following these eight divisions of the path to achieve spiritual enlightenment and cease suffering:

Right Understanding is about applying the four noble truths in your life, taking them from an idea to a practiced reality. The enlightened person sees the truth of the world, recognising the flawed and temporary nature of objects and ideas. They see the cause and effect relationships that connect the events of the world. Because all ideas and concepts are ultimately impermanent, the enlightened person doesn’t rely on ideologies and other external explanations of the world in order to practice Right Understanding. Instead they cultivate their intuition and use it to build a deeper, more complete, understanding of the world beyond the level of appearances.

Right Speech is the practice of always expressing oneself in a way that enhances the quality of people’s lives, and does no harm. It means to refrain from lies and deceit, malicious language, angry or offensive language, and idle chit-chat (ie. gossip). The enlightened person therefore tells the truth, speaks with warm gentleness when they do speak, and refrains from speaking when they have nothing important to say.

Right Action can be defined in open-ended terms as that which a person should not do. That potentially leaves all else open. In broad terms, right action means refraining from harming any sentient creature, stealing, and sexual misconduct. Doing no harm to others covers a very broad range of behaviours. The worst a person can do is to take the life of sentient creatures, hence many Buddhists are vegetarians (though this is not strictly required). Not stealing includes all forms of robbery, theft, deceit and fraud; essentially taking what you have not earned the right to have. The enlightened person is therefore a kind, compassionate person in their dealings with the world. They respect other people’s property, and do not engage in sexual behaviour that harms others either physical or emotionally.

Right Livelihood is about earning one’s living in ways that do no harm to others. Of all the possible ways a person might earn money, they should avoid those that exploit people’s weaknesses. Right livelihood means one should refrain from any employment that is contrary to the principles of right action and right speech, including but not limited to trading in weapons, trading in living beings, including slavery, prostitution and raising animals for slaughter, butchery and meat processing, and trading in drugs and poisons, including alcohol and recreational drugs.

Right Effort is being prepared to put in as much effort as is needed to live the noble truths and eight-fold path. Some people are inclined to ration how much effort they will exert, which effectively excludes them from many worthy endeavours that do not appear to have a high enough return on their effort. Right effort is an attitude of “I don’t care how much effort it takes, I’m going to do it!” The mental energy that is consumed by right effort is directed into self-discipline, truthfulness, and compassion. The same energy might otherwise be channelled through a person’s base nature to produce desire, aggression, and violence. Right effort ensures that this mental energy is expressed in wholesome ways. The enlightened person therefore practices right effort by preventing unwholesome states of mind from arising in them, releasing unwholesome states that have already arisen, arousing wholesome states that have not already arisen, and preserving wholesome states that have already arisen.

Right Mindfulness is a state of heightened consciousness in which a person has cultivated the ability to see the world around them clearly, without delusion. Seeing the world clearly requires a person to allow sense perceptions to be received but not be thought about too much. For many, receiving a sense perception triggers a train of thought in which the sensed object is categorised and thought about until a conclusion is reached. This conclusion is the product of complex processing and ends up bearing little resemblance to external reality that produced it, having been filtered through one’s preconceived ideas. It is a process that occurs automatically and unconsciously for most of the time.
Right mindfulness is therefore about becoming conscious of your mind’s tendency to interpret and distort meaning from our experience of the world and to limit this tendency by simply allowing the world to be what it is without judging it or wishing it were otherwise. If you do this, you will experience the world more fully and gain greater intuitive insight into the nature of reality.
The enlightened person has learned to observe their mind and control where it goes. They have cultivated consciousness about consciousness. Exercising these higher brain functions does not happen automatically in most people, it must be cultivated through right mindfulness. The enlightened person therefore cultivates right mindfulness through contemplating the four foundations; the body, one’s feelings (ie. repulsion, neutrality, attraction), one’s state of mind, and observed phenomena.

Right Concentration is about developing the capability to focus all of one’s attention on a single object and maintain that focus over an extended period. All of the aspects of the mind are unified and working towards this one activity. Conflicting and distracting mental processes have been eliminated or sublimated into the unified effort. The object of this concentration is on some aspect of the noble truths and eight-fold path. These are considered wholesome objects for right concentration. The enlightened person cultivates right concentration through regular meditation practice (more on this later).