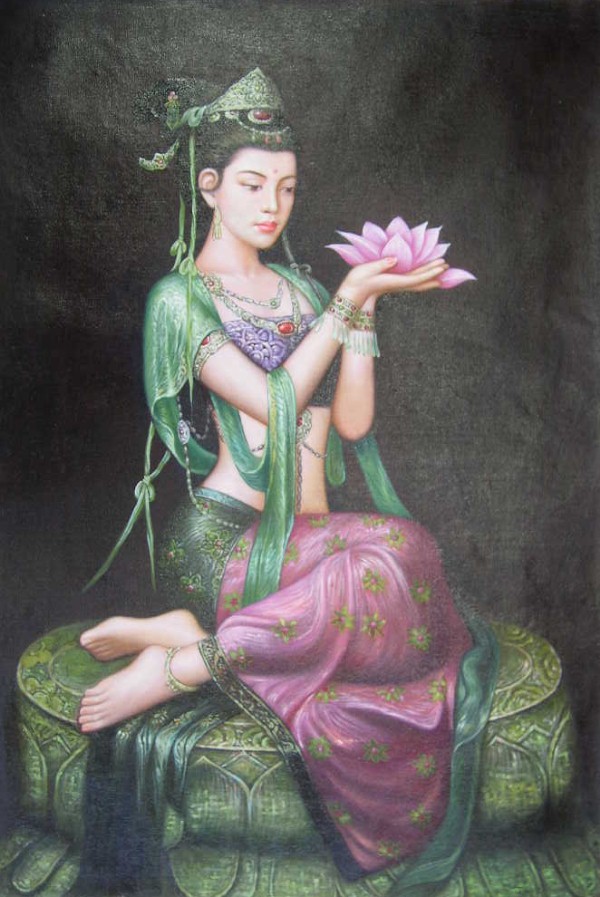 Who Is Kuan Yin?

Kuan Yin (also spelled Guan Yin, Kwan Yin) is the bodhisattva of compassion venerated by East Asian Buddhists. Commonly known as the Goddess of Mercy, Kuan Yin is also revered by Chinese Taoists as an Immortal. The name Kuan Yin is short for Kuan Shih Yin (Guan Shi Yin) which means "Observing the Sounds of the World".

In Japanese, Kuan Yin is called Kannon or more formally Kanzeon; the spelling Kwannon, resulting from an obsolete system of romanization, is sometimes seen. In Korean, she is called Kwan-um or Kwan-se-um. In Vietnamese, she is called Quan Âm or Quan Thế Âm Bồ Tát.

Along with Buddhism, Kuan Yin's veneration was introduced into China as early as the 1st century CE, and reached Japan by way of Korea soon after Buddhism was first introduced into the country from the mid-7th century. 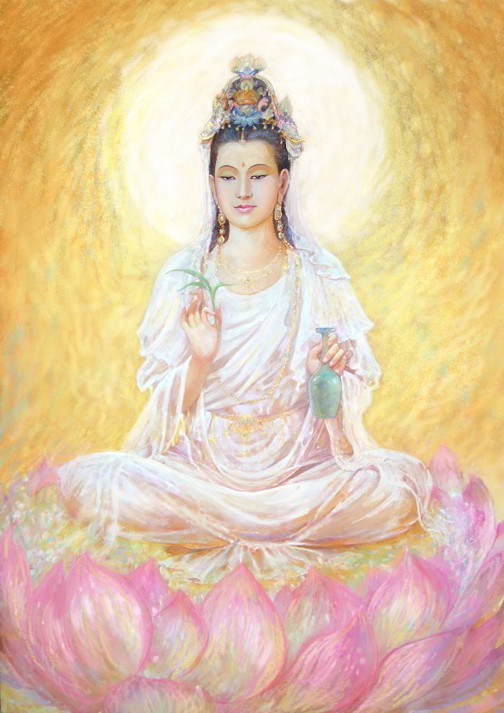 Representations of the bodhisattva in China prior to the Song Dynasty (960-1279) were masculine in appearance. Images which later displayed attributes of both genders are believed to be in accordance with the Lotus Sutra, where Avalokitesvara has the supernatural power of assuming any form required to relieve suffering and also has the power to grant children. Because this bodhisattva is considered the personification of compassion and kindness, a mother-goddess and patron of mothers and seamen, the representation in China was further interpreted in an all female form around the 12th century. In the modern period, Kuan Yin is most often represented as a beautiful, white-robed woman, a depiction which derives from the earlier Pandaravasini form.

One Buddhist legend presents Avalokitesvara as vowing to never rest until he had freed all sentient beings from samsara. Despite strenuous effort, he realized that still many unhappy beings were yet to be saved. After comprehending the great demand, he became overwhelmed and his head split into thousands of pieces. Fortunately, a Buddha assembled him back together again. With eleven heads gazing to the front and sides, Avalokiteshvara possesses the unique gift to see everywhere at once and reach out to the needy.

A character known as Kuan Yin is also mentioned in the Book of Lie Zi as a Taoist sage, but it is unclear if this refers to the Kuan Yin later venerated as a bodhisattva.

In China, it is said that fishermen used to pray to her to ensure safe voyages. The titles 'Kuan Yin of the Southern Ocean' and 'Kuan Yin (of/on) the Island' stem from this tradition. 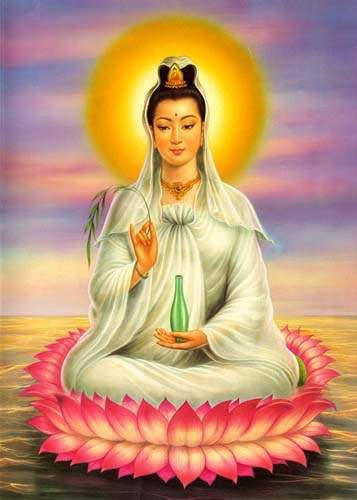 Another story, possibly Taoist in origin, describes Kuan Yin as the daughter of a cruel father who wanted her to marry a wealthy but uncaring man. She begged to be able to enter a temple and become a nun instead. Her father allowed her to work in the temple, but asked the monks to give her very hard chores in order to discourage her. The monks forced Kuan Yin to work all day and all night, while others slept, in order to finish her work. However, she was such a good person that the animals living around the temple began to help her with her chores. Her father, seeing this, became so frustrated that he attempted to burn down the temple. Kuan Yin put out the fire with her bare hands and suffered no burns. Now struck with fear, her father ordered her to be put to death. After she died she was made into a goddess for all of her kindness and began her journey to heaven. She was about to cross over into heaven when she heard a cry of suffering back on earth. She asked to be sent back and vowed to stay until all suffering had ended.

One version of this legend states that, at the point of Kuan Yin's father's execution of her, a supernatural tiger took Kuan Yin to one of the more hell-like realms of the dead. However, instead of being punished by demons like the other inmates, Kuan Yin played music and flowers blossomed around her. This managed to completely surprise the head demon. The story says that Kuan Yin, by being in that hell, turned it into a paradise.

Due to her symbolising compassion, in East Asia Kuan Yin is associated with vegetarianism. Chinese vegetarian restaurants are generally decorated with her image, and she appears in most Buddhist vegetarian pamphlets and magazines. 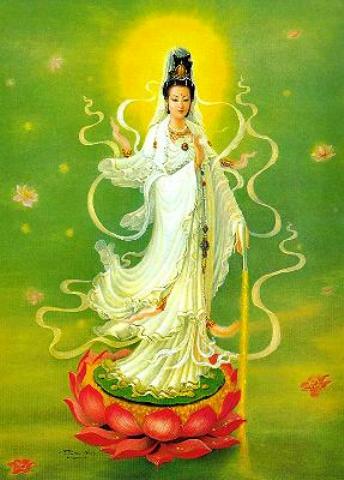 According to one legend, Kwan Yin, who is often referred to as the female Buddha, was a beautiful Indian princess who forsook marriage and the good life to live in a convent in order to become a truly enlightened human being, or bodhisattva. By turning her back on a life of luxury and seeking out spiritual enlightenment, her life story is similar in theme to that of the historical Buddha, Prince Siddhartha Gautama. Both individuals eventually became thoroughly enlightened and compassionate spiritual beings, who sought to alleviate mankind's sufferings. Talk about more joy in Tushita Heaven!

After having achieved enlightenment and the right to enter Buddhist Heaven or Nirvana, legend has it that at Heaven's gates Kwan Yin heard the despairing cry of someone back on earth. Upon hearing that sad cry, she quickly returned to the earthly plane, and vowed to stay there to help all those who suffer achieve the same level of enlightenment that she had, so that they too could enter Nirvana. Kwan Yin's name means "The one who hears the cries of the world."

For centuries Eastern cultures have worshipped Kwan Yin as the Compassionate Saviouress of the East. Likened to the great stature of the Virgin Mary in the West, she is the Goddess of Compassion, a motherly figure thought to bestow children on the truly faithful, and to be there for anyone in need of love and sympathy.

All those who needlessly suffer are Kwan Yin's children. She is all-loving, and the perfect embodiment of beauty, grace and enduring compassion.

Kwan Yin's appeal is that she responds to the heartfelt needs of ordinary people. She is accessible to anyone, regardless of social status, and will come to the emotional rescue of anyone who calls upon her in a time of crisis. There are many ways to invoke Kwan Yin into one's life. The traditional way is by chanting the mantra OM MANI PADME HUM.

It is further believed that to have a picture or statue of Kwan Yin in one's home brings good luck and protection to the household. 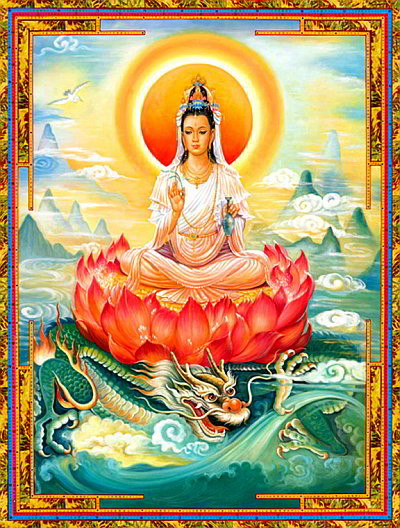 The Jewel in the Lotus

Amongst modern Buddhist scholars, Kwan Yin is considered to be the feminine form of Avalokitesvara (Sanskrit), the male bodhisattva of compassion of Indian Buddhism whose worship was introduced into China in the third century. The Buddhist monk and translator Kumarajiva was the first to refer to the female form of Kwan Yin in his Chinese translation of the Lotus Sutra in 406 A.D. Because Kwan Yin's name appears thirty-three times in Kumarajiva's translation, Chinese and Japanese Buddhists have come to associate the number 33 with her radiant identity.

Despite ongoing controversy over the true historical origins of Kwan Yin as a female deity, the depiction of a Buddhist bodhisattva as both 'god' and 'goddess' is not inconsistent with Buddhist doctrine; however, the legendary Buddhist saint Miao Shan, a Chinese princess who lived about 700 B.C., reinforced the image of the bodhisattva as being that of a woman.

The precious vase Kwan Yin often holds in her depictions symbolizes the sacred nectar of compassion and wisdom. She is also frequently portrayed as a slender woman in flowing white robes who carries in her left hand a white lotus, an abiding symbol of purity of heart and spirit.

Kwan Yin's role in Chinese Buddhism is that of a wise and compassionate Madonna. Her embodiment of beauty, grace and compassion still represents the ideal of womanhood in Asia. There was a statue of Kwan Yin in every Buddhist monastery in China by the end of the ninth century. This highly evolved Chinese Buddhist goddess of infinite mercy, this precious jewel in the lotus, has transcended her own origins and is regarded as the female Buddha by the truly faithful all over the world. It is believed one third of the world's population still pray to her on a regular basis.

“Release judgments about yourself and others, and focus on the love and light that is within everyone. Gentleness is strength behind true power, and it comes from feeding yourself with nourishing words, thought, deeds, intentions, and all forms of food. Shield yourself from harshness by placing an intention to attract only kind and gentle life lessons and relationships. Transform harshness into gentleness by refusing to see anything but the shining light that’s within each person and situation. This intention begins with your relationship with yourself. Be very gentle with yourself in all ways. Be happy, be kind, besweet, but most of all, be true to you.”

Honored and worshipped by all,

As the fully Enlightened One.

Her great vows are profound and vast.

On the turbulent sea of life,

She provides the ferry-boat to those in needs,

And guides the way.

She brings the comforts to the sufferers

who invoke her name sincerely and mindfully,

She, the Most Merciful and Compassionate Avalokitesvara Bodhisattva,

Manifests herself and showers mercy just in time in all realms. 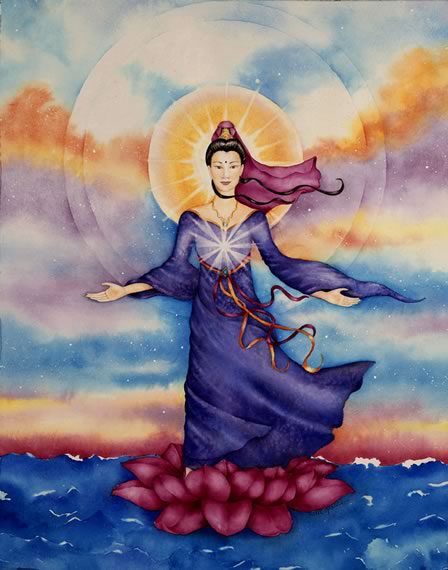