The Legend of The Wesak 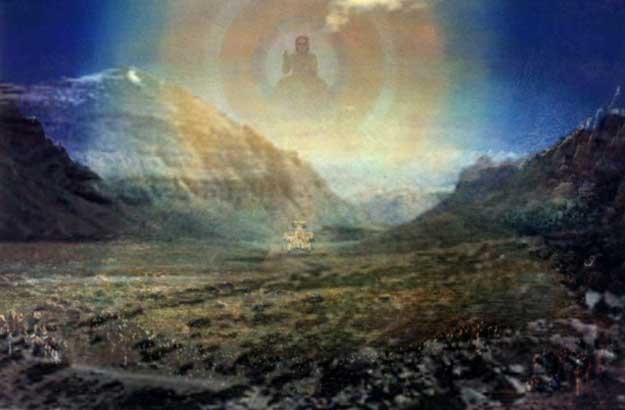 There is a valley, lying at a rather high altitude in the foothills of the Himalayan-Tibet ranges. It is surrounded by high mountains on all sides except towards the northeast, where there is a narrow opening in the mountain ranges. The valley is bottle-shaped in contour, with the neck of the bottle to the northeast, and it widens very considerably towards the south. Up towards the northern end, close to the neck of the bottle, there a huge flat rock. There are no trees or shrubs in the valley, which is covered with a kind of coarse grass.

Approaching the time of the full moon of Taurus, pilgrims from the surrounding districts begin to gather. The holy men and the lamas find their way into the valley and fill the southern and the middle parts, leaving the northeastern end relatively free. There, so the legend runs, gathers a group of those great Beings Who are the Custodians on Earth of God's Plan for our planet and for humanity.

This group of knowers of divinity are the main participants in The Wesak Festival. They arrange Themselves in the northeastern end of the valley, in concentric circles, and prepare for a great act of service. In front of the rock, looking towards the northeast, stand Those Beings Who are called by Their disciples The Three Great Lords. These are The Christ, Who stands in the center; the Lord of living forms, The Manu, Who stands at His right; and The Lord of Civilization, who stands to His left. These three face the rock upon which rests a great crystal bowl, full of water.

Behind the grouped Masters, adepts, initiates and senior workers under God's Plan are to be found the world disciples and aspirants in their various grades and groups (either "in the body" or "out of the body"), who at this time constitute the New Group of World Servers. Those present in their physical bodies have found their way there by ordinary means. Others are present in their spiritual bodies, and in the dream state. The "dream," which they later relate, has been uniformly registered by people throughout the world, and bears the testimony to the recollection of an inner spiritual happening.

As the hour of the full moon approaches, a stillness settles down upon the crowd, and all look towards the northeast. Certain ritualistic movements take place, in which the grouped Masters and Their disciples of all ranks take up symbolic positions, and form on the floor of the valley such significant symbols as the five-pointed star, with The Christ standing at the highest point; of a triangle, with The Christ at the apex; or a cross, and other well known formations, all of which have a deep and potent meaning. This is all done to the sound of certain chanted words and esoteric phrases, called mantrams.

The expectancy in the waiting, onlooking crowd becomes very great, and the tension is real and increasing. Through the entire body of people there seems to be felt a stimulation or potent vibration which has the effect of awakening the souls of those present, fusing and blending the group into one united whole, and lifting all into a great act of spiritual demand, readiness, and expectancy. It is the climax of the world's aspiration focused in this waiting group. These three words ~ demand, readiness and expectancy ~ best describe the atmosphere surrounding those present in this secret valley.

The chanting and the rhythmic weaving grows stronger, and all the participants and the watching crowd raise their eyes towards the sky in the direction of the narrow part of the valley. Just a few minutes before the exact time of the full moon, in the far distance, a tiny speck can be seen in the sky. It comes nearer and nearer, and grows in clarity and definiteness of outline, until the form of The Buddha can be seen, seated in the cross-legged Buddha position, clad in his saffron-colored robe, bathed in light and color, and with his hand extended in blessing.

When The Buddha arrives at a point exactly over the great rock, hovering there in the air over the heads of The Three Great Lords, a great mantram, used only once a year, at The Festival, is intoned by The Christ, and the entire group of people in the valley fall upon their faces. This Invocation sets up a great vibration or thought current which is of such potency that it reaches up from the group of aspirants, disciples and initiates who employ it, to the Being we know as God. It marks the supreme moment of intensive spiritual effort throughout the entire year, and the spiritual vitalization of humanity and the spiritual effects last throughout the succeeding months.

The effect of this great Invocation is universal or cosmic, and serves to link us up with that cosmic center of spiritual force from which all created beings have come. The blessing is poured forth, and The Christ, as the representative of humanity, receives it in trust, for distribution.

Thus, so the legend runs, The Buddha returns once a year to bless the world, transmitting renewed spiritual life, through The Christ. Slowly then The Buddha recedes into the distance, until again only a faint speck can be seen in the sky, and this eventually disappears. The whole ceremonial blessing, from the time of the first appearance in the distance until the moment The Buddha fades out of view, takes just eight minutes.

The Buddha's annual sacrifice for humanity (for He comes back only at great cost) is over, and He returns again to that high place where He works and waits. Year after year He comes back in blessing; year after year, He and His great brother, The Christ, work in the closest cooperation for the spiritual benefit of humanity. In these two great Sons of God have been focused two aspects of divine life, and They act together as Custodians of the highest type of spiritual force to which our humanity can respond. Through The Buddha, the wisdom of God is poured forth. Through The Christ, the love of God is manifested in humanity, and it is this wisdom and love which pour forth upon humanity each Wesak full moon.

When The Buddha has again disappeared, the crowd rise to their feet; the water in the bowl is distributed in tiny portions to the Masters, initiates and disciples, and they then go their way to their place of service. The crowd, who has all brought their little cups and vessels of water, drink of them and share with others. In this beautiful "water ceremony of communion" is portrayed the symbol of the new age which is upon us, the Aquarian Age, the age of the Water Carrier.

In this ceremony is perpetuated for us the story of the universality of God's love, the need for our individual purification, and the opportunity to share with each other that which belongs to all. The water, which has been magnetized by the presence of The Buddha and of The Christ, carries certain properties and virtues of a healing and helpful nature. 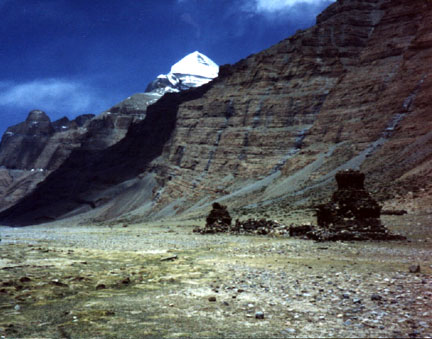 Stupas in the Wesak Valley, with Mt. Kailash in the background

From "The Wesak Festival~A Technique of Spiritual Contact" booklet by Alice A. Bailey, published by Lucis Trust

Continue reading here: Meditation in Preparation for the Wesak Festival