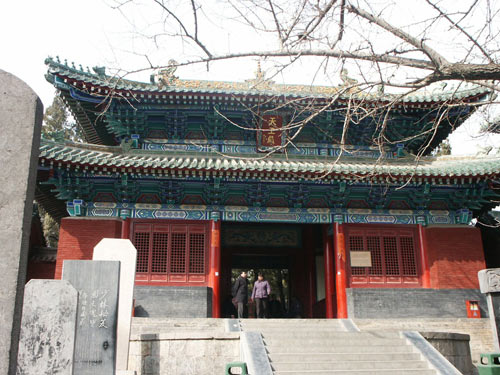 Ordinarily, the life of a Buddhist monk involves meditation, contemplation and simplicity.

In mid-16th century China, however, the monks of Shaolin Temple were called upon to battle Japanese pirates who had been raiding the Chinese coastline for decades.

How did the Shaolin monks end up acting as a paramilitary or police force?

By 1550, the Shaolin Temple had been in existence for approximately 1,000 years. The resident monks were famous throughout Ming China for their specialized and highly effective form of kung fu (gong fu).

According to contemporary chronicler Zheng Ruoceng, some of the other monks challenged the leader of the Shaolin contingent, Tianyuan, who sought leadership of the entire monastic force. In a scene reminiscent of countless Hong Kong films, the eighteen challengers chose eight from among themselves to attack Tianyuan.

First, the eight men came at the Shaolin monk with bare hands, but he fended them all off. They then grabbed swords; Tianyuan responded by seizing the long iron bar that was used to lock the gate. Wielding the bar as a staff, he defeated all eight of the other monks simultaneously. They were forced to bow to Tianyuan, and acknowledge him as the proper leader of the monastic forces.

With the question of leadership settled, the monks could turn their attention to their real adversary: the so-called Japanese pirates.

The fifteenth and sixteenth centuries were tumultuous times in Japan. This was the Sengoku Period, a century and a half of warfare among competing daimyo, when no central authority existed in the country. Such unsettled conditions made it hard for ordinary folks to make an honest living... but easy for them to turn to piracy.

Ming China had problems of its own. Although the dynasty would hang on to power until 1644, by the mid-1500s it was beset by nomadic raiders from the north and west, as well as rampant brigandage along the coast. Here, too, piracy was an easy and relatively safe way to make a living.

Thus, the so-called "Japanese pirates," wakou or woku, were actually a confederation of Japanese, Chinese, and even some Portuguese citizens who banded together. (The pejorative term wakou literally means "dwarf pirates.") The pirates raided for silks and metal goods, which could be sold in Japan for up to ten times their value in China.

Scholars debate the precise ethnic makeup of the pirate crews, with some maintaining that no more than 10% were actually Japanese. Others point to the long list of clearly Japanese names among the pirate rolls. In any case, these motley international crews of seagoing peasants, fishermen and adventurers wreaked havoc up and down the Chinese coast for more than 100 years.

Calling out the Monks 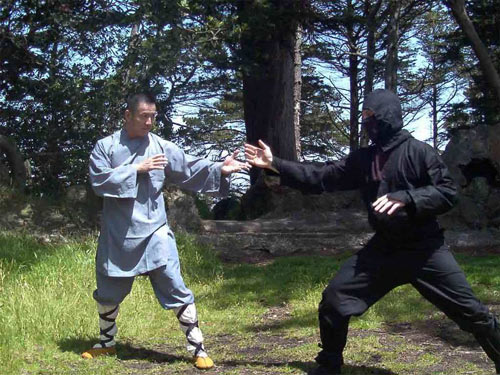 Desperate to regain control of the lawless coast, Nanjing official Wan Biao mobilized the monks of Shaolin, Funiu and Wutaishan. The monks fought the pirates in at least four battles.

The first took place in the spring of 1553 on Mount Zhe, which overlooks the entrance to Hangzhou City via the Qiantang River. Although details are scarce, Zheng Ruoceng notes that this was a victory for the monastic forces.

The second battle was the monks' greatest victory: the Battle of Wengjiagang, fought in the Huangpu River delta in July of 1553. On July 21, 120 monks met an approximately equal number of pirates in battle. The monks were victorious, and chased the remnants of the pirate band south for ten days, killing every last pirate. Monastic forces suffered only four casualties in the fighting.

During the battle and mop-up operation, the Shaolin monks were noted for their ruthlessness. One monk used an iron staff to kill the wife of one of the pirates as she tried to escape the slaughter.

Several dozen monks took part in two more battles in the Huangpu delta that year. The fourth battle was a grievous defeat, due to incompetent strategic planning by the army general in charge. After that fiasco, the monks of Shaolin Temple and the other monasteries seem to have lost interest in serving as paramilitary forces for the Emperor.

Although it seems quite odd that Buddhist monks from Shaolin and other temples would not only practice martial arts, but actually march into battle and kill people, perhaps they felt the need to maintain their fierce reputation.

After all, Shaolin was a very wealthy place. In the lawless atmosphere of late Ming China, it must have been very useful for the monks to be renowned as a deadly fighting force.