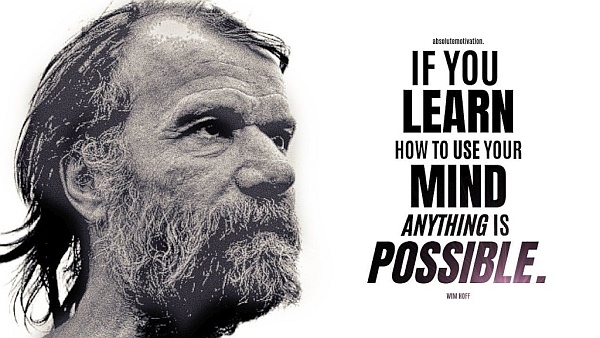 The results of a study carried out by the Wima Hof method suggest that one can learn to consciously control one's immune system. Wim Hof ​​is a Dutch world record holder who is famous for his ability to withstand the cold. He is often referred to as the "ice man" for his incredible cold resistance.

His methods were studied by scientists led by Mathijs Kox from the medical center of Radboud University in Nijmegen, the Netherlands.

These techniques are very similar to the Tibetan tummo (inner heart yoga) techniques and include third eye meditation, breathing exercises, and exposure to cold.

The above techniques were used to train 12 volunteers to determine their ability to get rid of infections.

A total of 24 people participated in the study, of whom 12 were trained and 12 formed a control group that did not receive any training. All were subjected to infection tests in which they were deliberately infected with a strain of bacteria that caused flu-like symptoms.

The study fared beyond the expectations of the researchers.

As a result, volunteers who underwent Hof's method showed fewer and less intense flu symptoms than those who did not. The PNAS scientific journal, in which the study was published, states:

“Trained individuals produced less inflammatory-associated protein and more interleukin-10, an anti-inflammatory protein. Until now, it has been thought that neither the autonomic nervous system nor the innate immune system can be influenced by will. However, the current study has shown that by practicing the lessons learned during a short-term training program, the two systems can be truly controlled by will. ”

Orthodox neurobiologists and immunologists were skeptical. They believed that the study examining the interactions between the nervous and immune systems was an area that was "somewhere in the shadows."

"This study is a good example of this connection," said Guiseppe Matarese, an immunologist at the University of Salerno, Italy, who was not directly involved in the study.

When you learn to control your mind, anything is possible. - Win Hof

Australian scientists also confirm the link between consciousness and immunity.

And this is not the first scientific study to show that the immune system is controlled by the mind and willpower. Australian scientists have figured it out next.

At the end of the experiment, the intensity of the allergic reaction on both hands was recorded and compared with a control group in which the above illusion was not induced.

And the result? The researchers found that the reaction was much stronger with a fake hand, which volunteers thought had been injected with histamine.

Professor Lorimer Moseley, who led the experiment, adds: "Such a finding is especially important for the immune system, because its main task is to distinguish" I "from" not-I ". Similar results reinforce the claim that the brain performs a certain control function over specific parts of the body depending on how strongly it is "self".

Both studies show that the immune system can be controlled by consciousness in many ways. This means that your thoughts, beliefs and moods can affect your body on a physical level. If you realize this, you can learn to control your mind, and thus your immune system and health. Focus on the bright sides of life, imagine yourself as happy and healthy, meditate every day and soon you will see constructive changes not only in your health, but throughout your life.

In the video below, you will meet a man from the Netherlands who has gained amazing control over his body through mind training. For example, it can control its immune system or withstand extreme frosts (video is in English).