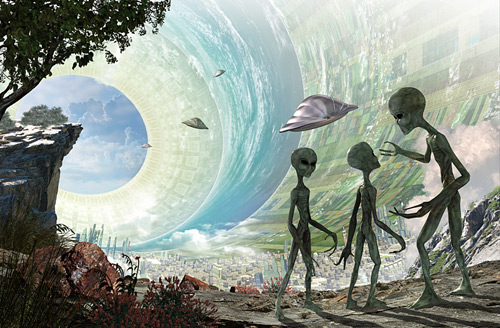 The interior of the Earth, some believe, is home to strange races of technologically advanced beings. Who are they and where are the hidden entrances to their subterranean cities?

Many readers of the paranormal and the unexplained are familiar with the theory that the Earth is hollow. The idea is based on the ancient legends of many cultures that say there are races of people - entire civilizations - that thrive in subterranean cities. Very often, these dwellers of the world beneath are more technologically advanced than we on the surface. Some even believe that UFOs are not from other planets, but are manufactured by strange beings in the interior of the Earth.

Who are these strange races of beings? How did they come to live inside the Earth? And where are the entrances to their underground cities?

The Network. One of the most common names cited for the society of underground dwellers is Agharta (or Agartha) with its capital city of Shamballa. The source for this information, apparently, is The Smoky God, the "biography" of a Norwegian sailor named Olaf Jansen. According to Agartha - Secrets of the Subterranean Cities, the story, written by Willis Emerson, explains how Jansen's sloop sailed through an entrance to the Earth's interior at the North Pole. For two years he lived with the inhabitants of the Agharta network of colonies who, Emerson writes, were a full 12 feet tall and whose world was lit by a "smoky" central sun. Shamballa the Lesser, one of the colonies, was also the seat of government for the network. "While Shamballa the Lesser is an inner continent, its satellite colonies are smaller enclosed ecosystems located just beneath the Earth' s crust or discreetly within mountains."

How and Why They Went There. The many cataclysms and wars taking place on the surface drove these people underground, according to Secrets: "Consider the lengthy Atlantean-Lemurian war and the power of thermonuclear weaponry that eventually sank and destroyed these two highly advanced civilizations. The Sahara, the Gobi, the Australian Outback and the deserts of the U.S. are but a few examples of the devastation that resulted. The sub-cities were created as refuges for the people and as safe havens for sacred records, teachings and technologies that were cherished by these ancient cultures."

The Entrances. There are allegedly several entrances to the Kingdom of Agharta throughout the world:

The People. In India there is an ancient belief, still held by some, in a subterranean race of serpent people who dwell in the cities Patala and Bhogavati. According to the legend, they wage war on the kingdom of Agharta. "The Nagas," according to "The Deep Dwellers," "are described as a very advanced race or species, with a highly-developed technology. They also harbor a disdain for human beings, whom they are said to abduct, torture, interbreed with and even to eat."

The Entrances. While the entrance to Bhogavati is somewhere in the Himalayas, believers assert that Patala can be entered through the Well of Sheshna in Benares, India. Says William Michael Mott in "The Deep Dwellers": "According to herpetologist and author Sherman A. Minton, as stated in his book Venomous Reptiles, this entrance is very real, with forty steps which descend into a circular depression, to terminate at a closed stone door which is covered in bas-relief cobras. In Tibet, there is a major mystical shrine also called 'Patala,' which is said by the people there to sit atop an ancient cavern and tunnel system, which reaches throughout the Asian continent and possibly beyond. The Nagas also have an affinity with water, and the entrances to their underground palaces are often said to be hidden at the bottom of wells, deep lakes and rivers."

The Beings. In an article entitled "The Hollow Earth: Myth or Reality" for Atlantis Rising, Brad Steiger writes of the legends of "the Old Ones," an ancient race that populated the surface world millions of years ago and then moved underground. "The Old Ones, an immensely intelligent and scientifically advanced race," Steiger writes, "have chosen to structure their own environment under the surface of the planet and manufacture all their necessities. The Old Ones are hominid, extremely long-lived, and pre-date Homo sapiens by more than a million years. The Old Ones generally remain aloof from the surface peoples, but from time to time, they have been known to offer constructive criticism; and it has been said, they often kidnap human children to tutor and rear as their own."

The Beings. One of the most controversial tales of inner Earth dwellers is the so-called "Shaver Mystery." In 1945, Amazing Stories magazine under the editorship of Ray Palmer ran a story told by Richard Shaver, who claimed he had recently been the guest of what remained of an underground civilization. Although few really believed the story, any many suspect that Shaver may actually have been psychotic, Shaver always averred that his story was true. He contended that the Elder Race, or Titans, came to this planet from another solar system in our prehistoric past. After a while of living on the surface, they realized our sun was causing them to age prematurely, so they escaped underground, building huge subterranean complexes in which to live. Eventually, they decided to seek a new home on a new planet, evacuating the Earth and leaving behind their underground cities populated by mutated beings: the evil Dero - detrimental robots - and the good Tero - integrated robots. It was these beings that Shaver claimed to have met.

The Entrance. Despite the enormous popularity of the Shaver Mystery in Amazing Stories - Palmer milked it for all it was worth, and then some - the location of the entrance to this underground world was never divulged.

We have 1000 guests and no members online