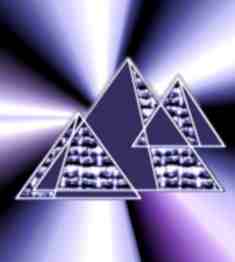 I want to talk about vortex energy here, because we need this information in order to understand the energies that exist around the world's Sacred Sites.

In this discussion, I will not try to interpet the underlying meaning of this energy. My purpose is only to bring your attention to the fact that these energies exist around Sacred Sites, and to make you aware of their complexity. Then, when you read someone else's ideas about Sacred Sites and vortexes, you will realize that you have to ''see'' from where they are before you will be able to make up your own mind as to what it all means.

What follows is a layman's summary of the way the energy in a vortex moves, its possible nature, and what personal meaning it may have for you.

The simplest vortex is a circle, where the beginning meets the end. Moving matter — in the form of water, wind or dust, any form of energy such as electricity through a wire, or even magnetic fields — can move in circles. But when the movement of the energy begins to spiral, a special vortex is formed — a hurricane is a good example of this[1] — and the nature of a spiral vortex is determined by the way it moves.

At first, we might think that a spiral is a spiral is a spiral. But on closer examination, we can see that a spiral may be more complex than we had thought. For example, a spiral moving toward the center is different from one that is expanding, or moving away from center. And further, the direction that the spiral is moving — clockwise or counterclockwise — is an important factor. Some scientists see vortexes as either male or female, depending on which direction they are rotating. Generally, clockwise is seen as ''female,'' and counterclockwise as ''male.''

Again, I'm not here to interpret, only to point the way for your own experiences.

Here are more thoughts: If you are positioned above a sprinkler like a ''Rainbird,'' which rotates to make the water move in a vortex — two directions are taking place at once. The water may appear to be moving, say, clockwise. But if you look only at the object that is rotating and creating the vortex, you will see that it is rotating in the opposite direction. Think about it.

To me, what this means is that if a vortex appears to be moving in a certain direction, the force that created it will be moving in the opposite direction. Very often, vortex researchers forget this idea, and so mix up the idea of male and female when they describe a specific vortex. But a problem arises in comparing one vortex to another unless both researchers use the same system to identify them. For example, the Japanese see the ''North'' pole of a magnet in the exact opposite way that Americans do. We see it as the ''South'' pole.

Vortexes also follow certain mathematical laws as they move. Two such examples are the Golden Mean vortex and the Fibonacci vortex. They appear almost the same, but they are extremely different in their natures.

The Golden Mean vortex will rotate toward or away from center forever — never reaching the center and never ending its outer expression. And the Fibonnaci vortex also rotates forever outward from the center. But the Fibonnaci vortex is absolutely finite in its inner quest to reach the center. It eventually comes to its beginning, and there must either stop or reverse direction. If it reverses direction, a Fibonnaci spiral will appear to create a completely new, outwardly-moving vortex — of the opposite spin!

Another vortex type, the toroidal vortex, also reverses its spin as it enters exact center. And this type of vortex actually moves in three dimensions, following the contours of the torus shape.

So if someone describes how a vortex is moving, or says it is female or male, we must realize not only that where we are located relative to the vortex determines its nature, but that nothing is as simple as it may seem.

The Mass of the Earth rotating around its axis creates two giant vortexes coming from the North and South poles. Also incredible are the two vortexes arising from the magnetic poles. These are the four major vortexes of the Earth. But there are millions of smaller ones.

In California, for example, there is a vortex called the Mystery Spot, because although it is provably real, no one understands it.

The Mystery Spot is about two or three city blocks in diameter, and its edge is extremely defined, like a huge soap bubble that's halfway in the Earth and halfway out. On the edge of this vortex, the California State Parks department has built a perfectly level, concrete pad with a permanent line drawn down its middle at the exact spot where the edge of the vortex crosses it. Built-in to this concrete pad is an instrument to prove that it is really perfectly level. And the Parks department encourages people to bring their own levels, so that they can see for themselves. Because without this proof, it would be impossible to believe that the earth in this area is not strongly tilted!

To experience the mystery of this vortex, two people stand on opposite sides of the line — so one of them is inside the vortex, and the other one is outside. Then the Park Rangers ask both people if the other's height seems the same as it was before they took these positions. And always, the person inside the vortex appears to be about four inches shorter than they were a few minutes before. It is amazing. I have done this, and the person inside the vortex truly appears to be much shorter. And when the two people change positions, the other person appears shorter.

The Mystery Spot is not the only one of its kind. Friends brought me two rocks from inside another vortex in the United States that has the same effect. And we found that just by holding one of these rocks, the same phenomenon happens: The person holding the rock appears shorter! They don't need to be in the vortex itself. This experience is so real that no one who has ever tried it so far has failed to have the same results.

Vortexes in Your Neighborhood?

How can you detect them? Look to see how the bark of the trees is formed. When you see bark spiraling up a tree, you are probably inside a vortex. If you look closer, you can sometimes actually see the outline of the vortex in the vegetation. And a near-perfect circle will be apparent on the surface of the Earth.

Have you ever noticed how a lawn will sometime have a perfectly round area where the grass is super-green?

And if you are standing in a female vortex, then you will find a male vortex not too far away. They balance each other, and are usually connected. In the female vortex, clockwise, you will probably notice that everything is dead. There will be very little or no life in this circle. In the male vortex, counterclockwise, the life there will be exaggerated and super healthy. Usually people don't even notice these vortexes, as they seem to blend in — but once you notice one, you will begin to see them everywhere.

About 15 years ago, I was in a vortex in Peru at Sachsahuaman. Our guide had pointed it out to me, and it was most unusual. The ancient Incas had built a stone circle, flat with the ground, exactly centered on this vortex. It had, I believe, twelve spokes coming out of the center. The vortex itself was only about 40 feet in diameter, but it was really strong. There were ten of us, and we all felt this rotating field very pronouncedly. According to our guide, this vortex was why the Incas built the stone temple in this location.

Like many others, this Peruvian vortex has special attributes. When you sit in its center and speak, it will reflect the sound back. This vortex is high on a hill, with no walls or anything nearby, but if you speak a word or make a sound out loud, you will get echos. This can be a truly shocking experience. The echos sound as though you are in a glass dome — there are at least three echoes coming back. Again, in the very center of this vortex I saw a perfectly round clump of green grass about three feet in diameter, while the rest of the surrounding area was dry.

In the vortex of the Mystery Spot, the parks department will show you how objects roll uphill, defying gravity. Until you have actually seen something like this, it seems impossible.

The Experience of Sacred Sites

So as you read the articles in this month's Spirit of Ma'at, understand the special nature of vortexes and how they are associated with sacred sites.

If you truly wish to experience vortex energy, where the characteristics of ''reality'' are subtly altered, you can simply go into nature and find the real thing.

Or visit a sacred site or temple, where the energies are strong and palpable. Then you will perhaps begin to understand the ancient knowledge they contain — why these sites exist where they do, and what they mean.

For you may read what others hypothesize, but there is no substitute for going there and experiencing them yourself.

With Sacred Sites and vortex energy, we encounter one more phenomenon that reminds us that truth is not always in the words.

We have 1126 guests and no members online