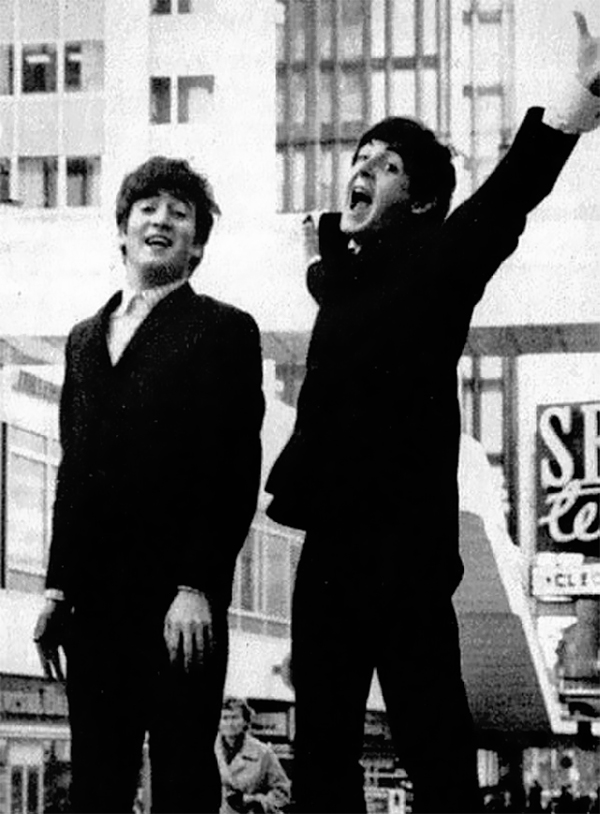 While I know the world "began to change forever" on numerous days, it turns out that July 6, 1957, was truly one of those days. That day there was a meeting that eventually affected hundreds of millions of us globally.

As it turns out July 6, 1957, was the day that two teenagers met at the St. Peter Church Fete in Woolton, Liverpool, England. Their names? "It was 63 years ago today, Sergeant Pepper introduced the band to play, they've never been out of style, so won't you come along a while, and let me introduce to you, the one and only pair, of John and Paul meeting at the fair!" From the news:

Paul McCartney and John Lennon met for the first time on July 6, 1957, at the St. Peter Church Fete in Woolton, Liverpool, England. Lennon was playing in his band, the Quarry Men, and a mutual friend and sometimes bandmate, Ivan Vaughan, brought McCartney along and introduced the two.

A plaque on the exterior wall of the church, much-photographed by Beatles fans, tells the story of their meeting, and adds "As John recalled, 'that was the day, the day that I met Paul, that it started moving.'"

Started moving? Do ya think? By October 1962 they were already streaking toward (as JL put it) "the topper most of the popper most," and by April 1964 their songs occupied 7 of the top 10 on the charts, including all of the top 5. That's never been done before or since by any artist in the world.

ps. - the graveyard in that church inspired "Eleanor Rigby."

pps. - While I don't have an exact time, a horary chart for that time shows some fairly interesting (and global!) developments.

A brief snapshot: It was a Saturday, the story says John played on a moving lorrie around 2 pm, and then had to play again at the Saturday night dance. It says a bandmate introduced Paul to John after the first gig when they were setting up their equipment to play at the second gig, so the chart had to be between 3:30 pm and 4:30 pm. The website "the Beatles Bible" lists 3:30 pm, but of course that's an approximate time. 3:30 pm puts the Ascendant at 4 Scorpio and MC at 17 Leo, with the Moon rising at 10 Scorpio 51. At 4:30 pm the Asc was 14 Scorpio and the MC 2 Virgo, with the Moon still rising in the 12th at 11 Scorpio 24.

So here's the chart for 3:30 pm, knowing it could have been a little later. Also it's been recorded that when John and Pete Shotton were walking home after the 8 pm gig that it was first discussed inviting Paul to join the band. At 10 pm the Asc was 23 Capricorn and the MC was 29 Scorpio, with the Moon at 14 Scorpio 27. Pete ran into Paul a couple of weeks later, and told him he was in the band.

Of note in the 3:30 pm chart is that Venus and Mars, rulers of the Asc and Dsc, are elevated and conjunct in Leo, and the ruler of the Leo stellium the Sun, makes a quintile to Jupiter with Jupiter quintile to Saturn and the Sun biquintile Saturn. That makes for three points of a 5 pointed star!! Add Moon rising quintile Pluto in the 10th and Mercury biseptile Neptune, and destiny was set in motion. I'm sure the Asc could be rectified via events in the Beatles' history. (Click on the image to make it larger) 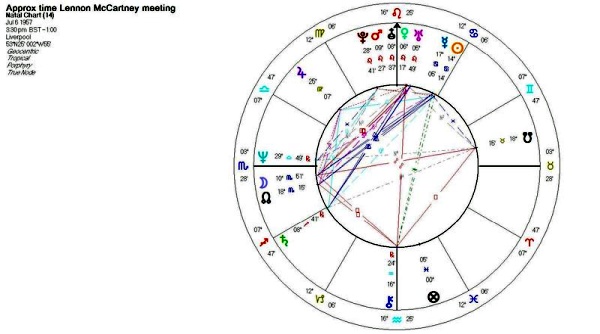 On a final note, it's interesting the chart has Sun in Cancer and Moon in Scorpio, given that Ringo Starr has a Sun at 15 Cancer and George Harrison had Moon at 8 Scorpio. When John and Paul met, Cancer and Scorpio, heavy influences for their future bandmates they hadn't yet met, were featured signs at their meeting. When we add Ringo's stellium in early Leo, and George Harrison's Jupiter at 16 Cancer, it seems a perfect fit to this "beginning of the Beatles."