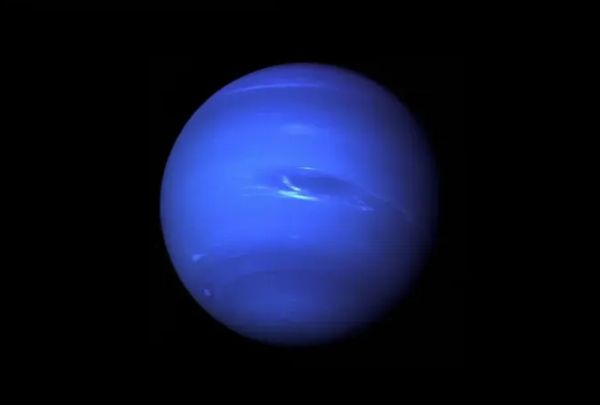 Neptune retrograde is generally associated with stripping away the illusions, dreams, and false realities that have clouded your vision.

Neptune retrograde 2022 gives you the ability to follow your intuition to know what you need to achieve to turn your dreams into reality.

Neptune retrograde in transit is a regular cycle lasting 160 days every year during the opposition to the Sun. As with all outer planets, it causes less concern than the rarer inner planet retrogrades. Neptune is retrograde 40% of the time compared to Mars at 9% and Venus at only 7% of the time.

Transiting Neptune retrograde can internalize your fears and anxieties by stripping away the illusions, dreams, and false realities that have clouded your vision. The destruction of your fantasy world will show those harsh realities you sought to avoid at some stage in the past. Maybe you have kidded yourself about true love, your financial situation, or your career prospects.

A new relationship or a critical event can trigger an old or past life memory of pain. Neptune rules self-sacrifice, victimization, false accusation, scandal, and slander. Neptune retrograde can show the source of the pain from which you sought to escape. You may then feel humiliated, betrayed, scared, anxious, or guilty.

The internalizing influence of retrograde motion means you may spend more time worrying about yourself and your problems. Self-pity, social anxiety, or depression could lead to withdrawal and loneliness. Neptune retrograde is the ideal time for spiritual self-development. Self-help books or counseling may help but other tools include meditation, Yoga, Tarot, astrology, swimming, and a healthy toxin-free diet.

Phobias, hypochondria, and paranoia may become more noticeable during Neptune retrograde but also easier to discuss. The world may seem boring when conspiracy theories are debunked or Armageddon is postponed indefinitely. Sometimes, however, your suspicions may, in fact, be based on realistic psychic impressions. In the case of health matters especially, it is worth seeking a second opinion in case of misdiagnosis or misinterpretation of results.

Neptune stations retrograde on Tuesday, June 28, 2022, at 25°26′ Pisces. As shown in the horoscope below, Neptune retrograde makes aspects to the Moon, Mars, and Saturn. Neptune retrograde at the midpoint of Mars sextile Saturn creates an aspect pattern can an Eye.

There are five helpful blue and green aspects compared to one challenging red aspect. Neptune retrograde 2022 also aligns with a fortunate fixed star in the constellation Pegasus. This means there are enough positive influences to overcome the confusing and deceptive influence of Moon square Neptune. 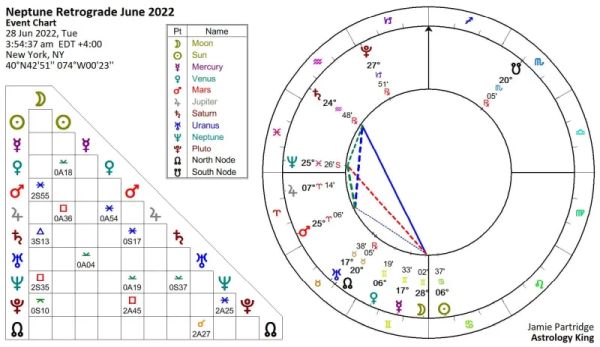 Moon square Neptune can bring confusion and emotional insecurity. Strange feelings or experiences may leave you questioning reality. You may not perceive things correctly or may delude yourself. Extreme emotional sensitivity makes it easier to be hurt. You could more vulnerable to deception and being taken advantage of.

You may experience suffering yourself or be touched by it in some way. This aspect makes you more compassionate and sympathetic. Don’t hide this sensitive, caring side of yourself but share it openly. Tell someone if you are suffering or lend a helping hand to someone in need.

Any Eye aspect pattern also called an Information aspect pattern, is a small blue-green triangle. It consists of two green semisextile aspects (Mercury-like) and one blue sextile aspect (Venus-like). The Eye’s flexibility, inquisitiveness, and alertness produce a state of concentrated attention. Information is sought and found, everything is observed in detail, and nothing escaped the “eagle eye”.

The Eye can also be compared with a radar screen, which rotates to take in all sides, scans the surroundings, and records everything it comes across. It can also pick up things that are not visible, producing parapsychological abilities like clairvoyance, clairaudience or clairsentience. [1] This is especially the case with Neptune retrograde at the focal point of this Eye aspect pattern.

Aspects of the Eye

Mars semisextile Neptune makes you more sensitive to the desires of others and you will enjoy being of service to them. Increased strength and courage can be applied to a spiritual quest based on your beliefs and convictions. This could see you uncovering the truth of a matter, fighting for a just cause, or helping others through acts of kindness and compassion.

Increased sensuality and sexual charisma make it easier to have your passionate desires fulfilled. You could attract someone more in tune with your level of spiritual development and you may even find your soulmate. Share your soothing and healing energy.

Saturn semisextile Neptune brings a sensible and realistic outlook. Self-reflection, dreams, and meditation will help you understand your limitations, and the deceptive and confusing influence of the Moon square Neptune retrograde 2022.

Increased awareness brings a better understanding of your spiritual goals and how they fit into the bigger picture. You have the patience and willingness to sacrifice short-term gratification for long-term success.

Mars sextile Saturn gives tremendous drive and endurance to achieve your long-term goals. The perfect blend of patience and ambition makes you determined to do the very best you can, no matter how long it takes.

You can methodically plan out your course of action in the most efficient way. A strong work ethic and attention to detail mean you can attack complex and difficult tasks. This should also be a time of loyalty, security, and stability in your close relationships.

The star map below shows Neptune retrograde 2022 aligning with stars in the Southern Fish of Pisces Constellation as well as the Pegasus constellation. 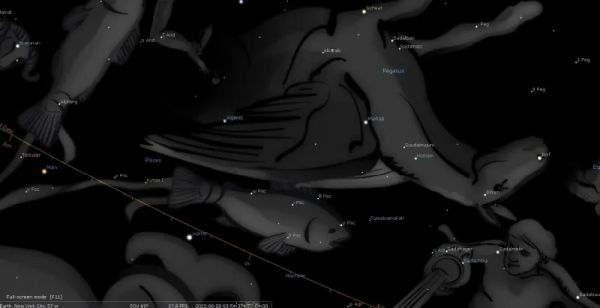 The only major fixed star in the list below is Markab, Alpha Pegasi. But Neptune stays within the orb of this fortunate star for the entirety of the retrograde cycle.

Theta Piscium is located in the body of the Southern Fish of Constellation Pisces: Ptolemy makes the following observations: “Those stars in Pisces which are in the body are like Jupiter and Mercury (religious mind, thoughtful, philosophical, writer on religious or similar subjects). [2]

Pegasus gives ambition, vanity, intuition, enthusiasm, caprice, and bad judgment. Prevails against disease of horses and preserves horsemen in battle. According to Ptolemy, the bright stars are like Mars and Mercury (high enterprise, combative, destructive. [2] The constellation portends events concerning ships and the ocean and also changes in the weather. [3]

The name Markab is derived from the Arabic word مركب markab, “the saddle of the horse”.

Mu Pegasi is named Sadalbari, which derives from Arabic: سعد بارع saʿd al-bāriʿ, the “auspicious star of the splendid one.”

Natal Neptune retrograde suggests that some area of life is so painful that you prefer to escape this reality through your own imagined dream world. It is likely that this tendency to avoid pain through illusion is strongly rooted in tragic past life experiences such as torture, where your only option to escape physical pain was to transcend from a physical to a more spiritual plane of existence.

This earlier experience of spiritual pain relief was probably so intense and overwhelming that it became imprinted in your soul memory, in the DNA of every cell in your body. Past life crises like illness, false accusation, and victimization will often be repeated to a lesser extent early in your life. You may notice you are subject to gossip, scandal, or slander.

I associate religious persecution with Neptune retrograde. Throughout history, the Roman Catholic Church alone has accused, tortured, burned, drowned, and massacred countless millions of pagans, Protestants, Muslims, and many other innocents.

No matter the reasons, you come into this life with some justified fears and anxieties. Although not exactly as real or extreme now, certain experiences will trigger those more painful memories. Your natural reaction is to get rid of the pain by accessing that higher spiritual dimension. The quicker the better and you probably don’t care whether it is through meditation, prayer, your imagination, or drugs.

The release of pain-relieving hormones in your brain is addictive so you could easily resort o escapism more often and for less critical reasons over time. You may use illness to gain sympathy or to avoid the harsh realities of life. Perhaps you are more subject to confusion and deception than most or have a tendency to become involved in intrigues and scandals.

False accusations and victimization will exacerbate your fears and anxieties around groups of people or certain people. Other karmic issues associated with Neptune retrograde in your chart could include misdiagnosed or mystery illnesses with the associated blame or guilt; or institutionalization for crime, mental illness, or religious mania. Feeling isolated from society is common for many reasons.

Neptune retrograde is likely to play some role in the case of the accuser, inquisitor, or torturer. However, I expect that Saturn retrograde guilt and Pluto retrograde misuse of power would play bigger roles in these stories.

One Who Serves: Q/A Session - No One Can Control You Unless You Allow It

Archangel Michael: No One Can Control You Unless You Allow It

Inspiration for the Week - Learning to Trust Yourself

Accepting, Understanding and Loving Everyone

Teachings of the Masters: Align With Higher Truth

The Ascended Masters: Matter of Life

The Federation Of Light: Everything Is Connected