Oil Divination - Lecanomancy
A+ A A- 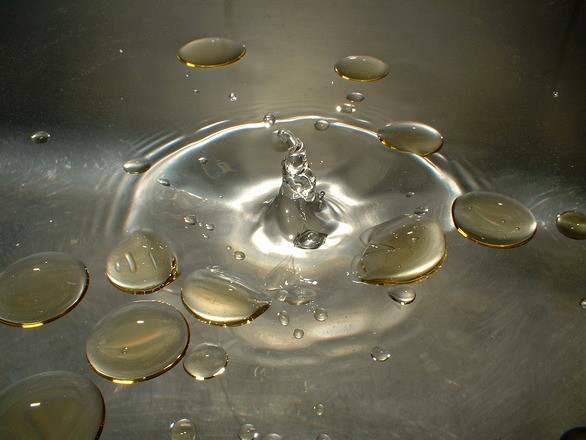 Lecanomancy, divination by mixing oil and water in a bowl

Generally, divination by using a mixture of water and oil inside a vessel.

Specifically, the art and practice of divination by interpreting the patterns and ripples left on the surface of a mixture of water and oil inside a basin or bowl. Generally small precious stones, or other divinatory objects, are dropped in. However, many cultures simply use olive oil in a glass bowl of water.

Lecanomancers, the experts in this art, were considered a special class of divinatory priests, and this mode of prediction was widely practiced by The Etruscans and many other ancient cultures.

In this branch of Hydromancy a special bowl was used, where the water was covered by a thin layer of animal oil or fat. After a question was asked, the diviner dropped a consecrated stone, usually marked with mystical symbols. Whether or not the oil separated determined the final prognostication.

Another method was to toss an object into a full container of water, or water and oil mixture, and interpret either the image formed by it or else the sound it made striking the water.

Another more intricate method involved pouring oil into a silver vase filled with water, on a clear, moonlit night. The light from a candle would then be reflected onto the liquid by the blade of a knife. The diviner would then concentrate on the image formed in the water/oil mixture to ascertain futurity. In a similar method, the flickering reflection of a candle's flame on the oil was used to determine the future.

In yet another method, the pattern of ripples formed after a consecrated object or a small sacrifice was cast into a pool, basin, or pond, were interpreted.

In a method in which the Lecanomancer used olive oil slowly poured into a bowl of consecrated water, prognostications were obtained according to the following guideline:

You will need a bowl of water and a jar of oive oil. Put the bowl on a table and sit before it. Ask for a general reading of the future and slowly pour a bit of oil into the water. A teaspoon or so is plenty. The oil will rise and float on the water's surface. Watch it for a few moments. Determine the future according to the following list:

You will need a bowl, preferably glass so you can see all the way through. Oil – any oil, but standard cooking oils are great as they haven’t been mixed. Salt, for purification and protection. Determine the future according to the following:

If the oil separates and stays that way, it was considered to be a negative outcome. This is where the salt comes in. (Pay the priest a little more…) the salt would be pinched and dropped in, either once, or to the number according to the matter asked. If the salt doesn’t affect the salt you would read the oil with its original negative outlook. If the salt makes the oil form together, you have hope or a more positive outlook once the negative flow has passed. If the salt turns the colour of the oil to white, you await disaster.

Lecanomancy, like most divinatory systems, is quite ancient, and has been practiced since time immemorial by the mysterious Etruscans, Babylonians, Scythians, Greeks, Romans, and Arabians, among others.

In Connection You Are Powerful - Message From The Angels
Become a Patron!