The Mysterious Valley of the Headless Corpses

Sleeping Beauty: 2-Year-Old Girl Is One Of The Best Preserved Mummies Ever 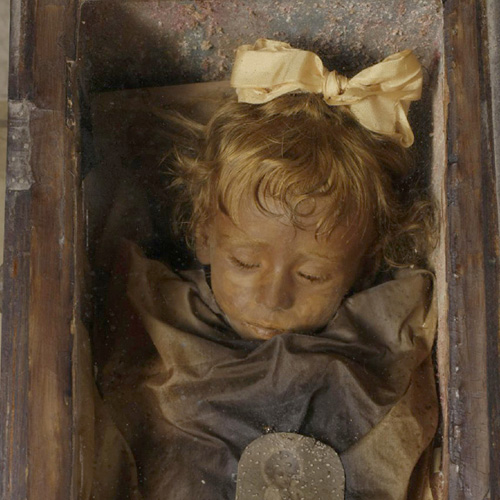 Ninety years ago, on December 6, 1920 Rosalia, daughter of Sicilian Official Mario Lombardo, died of pneumonia at the age of two.  Her grieving father couldn't settle for just laying his daughter to rest and sought out Alfredo Salafia, a Sicilian professor of chemistry, to preserve her. After he worked his magic, she was placed in the Capuchin catacombs of Palermo in Sicily where she rests to this day.

Her near-perfect preservation has earned her the name "Sleeping Beauty" since she appears to be a living child simply taking a nap. The secrets to her embalming stayed unknown for years until Salafia's handwritten memoir was uncovered by anthropologist and curator of the Capuchin Catacombs Dario Piombino-Mascali. It revealed that her blood was replaced with a formula that prevented the body from drying out and killed bacteria. The recipe translates to: "one part glycerin, one part formalin saturated with both zinc sulfate and chloride, and one part of an alcohol solution saturated with salicylic acid."

Her unusually perfect embalming isn't the strangest part of Rosalia's story. Being such a famous mummy, she is visited often and this was how it was discovered that her eyes appeared to be opening. One person even took four images of her face two hours apart and put them in a video to show the progress the eyelids make. While some think it is the soul of the child causing this anomaly, there are others who have more practical explanations. In an article from Discovery, Piombino-Mascali stated: "It’s an optical illusion produced by the light that filters through the side windows, which during the day is subject to change." He claims her eyes were never really closed in the first place which allowed this phenomenon to appear to happen.

I've always been fascinated by mummies because of their amazing appearances and stimulating histories. Of the many mummies out there, Rosalia sure has one of the more interesting stories. Her memory didn't end with her untimely demise or interesting preservation, as the mystery behind her opening eyes brought her to the public's attention. While there is an explanation for this, she will still remain one of the most mysterious and beautiful mummies out there. Check out the video to get another look at her and more information surrounding her origin.