Archangels of the Zodiac

Aries is the first sign of the zodiac, ruled by Mars. It represents offensive power and begins at the spring equinox. In Aries we move from the potential to the actual; from dormant to active participation. Desire, initiative, courage and action are words which best describe Aries.

Personal traits of an Aries person are openness, enthusiasm and individualism. They are outspoken, alert, quick to act and speak. They prefer to speak than listen. Arians are ambitious, with lots of drive and a strong desire to lead. They make poor followers. Fiercely independent, they usually take the side of the underdog in any controversy. They are champions of lost causes and losing battles. This trait is due to a strong belief in their own abilities to turn any situation around. 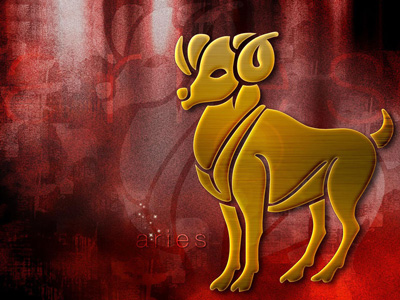 Arian values are more intellectual than spiritual. Primarily people of action, they demonstrate little subtlety or cunning. Frank and amiable, they make quick decisions, and grasp ideas just as quickly. Quick of mind, and just as quick to anger, Arians are known for their impatience, and are prone to be arrogant.

Aries have a strong self image, the ability to think fast and size up most situations in an instant. Arians calculate risks with lightning speed and make decisions accordingly. An adage that fits the Arian well is 'A straight line is the shortest distance between two points'. Arians don't waste time and energy beating around the bush, they come straight to the point, and leave the bodies where they fall.

Some of the negative traits of Arians come from what can be labeled 'a tragic flaw' in their makeup. A high energy output is cause for great anxiety in some Arians. Sometimes, this anxiety is so intense and unmanageable that it becomes cause to abandon a venture out of fear of failure. They then redirect their energy into something new. Another flaw in the Arian makeup is a fear of rejection. Rejection is near the top of their list of fears. If the Arian is not certain of acceptance, to avoid rejection, they do the rejecting first. The best defense is a good offense.

"There is a time for departure even when there's no certain place to go." —Tennessee Williams, born March 26, 1911

On the more positive side, Arians are known to be generous people. They give of their time, effort, money and sympathies. They have both moral and physical courage and will give support to anyone they believe is being treated unfairly, or to any cause they deem worthy. Such traits can be recognized in the actions of famous Arians William Morris, Charlie Chaplin and Paul Robeson. The Pre-Raphaelite artist and designer Morris dedicated much of his life to illuminating the social inequalities of Victorian England. The films produced and stared in by Chaplin bear a near universal theme of the underdog getting back at a system which treated him unjustly. Robeson put his career as an actor and singer, even his life, on the line to speak out against the racial inequities of his time. There's a calling to crusade running through the veins of every red-blooded Aries.

In their professions, Arians need to take charge. The routine or monotonous was not meant for you. Your originality, imagination and great mental and physical energy require work where you can utilize all of these traits. You prefer to work on your own or direct others. You are in your element in a position where you can communicate and form public opinion. Journalism, publicity, advertising, publishing, radio and TV are natural professions for you to prevail in.

The military is another field that is ripe for Arians with its many leadership possibilities. Law enforcement is another commanding vocation that is attractive to Arians. In a similar capacity Aries make excellent surgeons and surgical nurses. In the arts and entertainment field, Aries also does very well. You are endowed with so many valuable assets; a keen intellect, initiative, intuition, inventiveness, energy, leadership qualities and enthusiasm that you'll shine in any profession that you set your sites on.

"Iron rusts from disuse; water loses its purity from stagnation ... even so does inaction sap the vigor of the mind." —Leonardo da Vinci, Born April 15, 1452

"In spite of everything I shall rise again: I will take up my pencil, which I have forsaken in my great discouragement, and I will go on with my drawing." —Vincent van Gogh, Born March 30, 1853

Arians have to watch their impatience, lack of thrift, and a domineering attitude. Your ego also requires more than a fair share of continual approval and acclaim. Without this approval, your effectiveness can take a nosedive. Aries thrive on challenge, and they truly believe they can do anything - so they have a tendency to bite off more than they can chew. Acquiring patience, persistence and perseverance will go a long way in helping you to make the most advantage of your great gifts.

In summation, Arians are spontaneous people. They never ponder, they act. They are frank, open and not prone to be devious. The Arian takes definite steps, achieves definite results, is of help and benefit to those who need it, and attacks before waiting to be attacked. 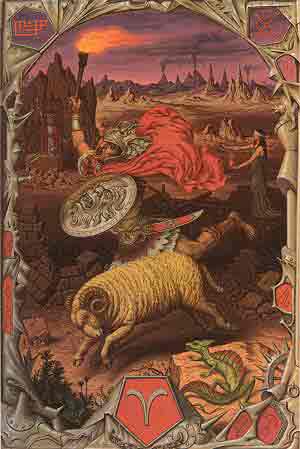 The Lore of Aries in Mythology

Throughout the ancient Mediterranean region, the ram figure was associated with the constellation Aries or Arietis to the Greeks, Kriya and to the Egyptians, Arnum.

Ares was the Greek god of war and pestilence. He was the son of Zeus and Hera, consort of Aphrodite. The Romans associated Ares with Mars, the enemy of the tyrants and defender of the just. Originally an agricultural god associated with the affairs of spring, Mars assimilated many of the characteristics of Ares since battles were often coordinated at this same time of year.

The Greek myths tell that the son of Nepele, Phrixus, was falsely accused of ravishing Biadice and condemned to death. In a variant tale, Phrixus was to be sacrificed to assure a bountiful harvest based upon a false oracle. In either version Phrixus is rescued, hastened to safety on the back of a golden ram sent by the god Mercury. At the ram's request, Phrixus sacrificed the animal to the god Zeus to honor the initial ritual offering. For his courage, the ram's likeness was set into the heavens. The ram's brilliant fleece, set within a temple, was later to play a central role in the tale of Jason and the Argonauts. 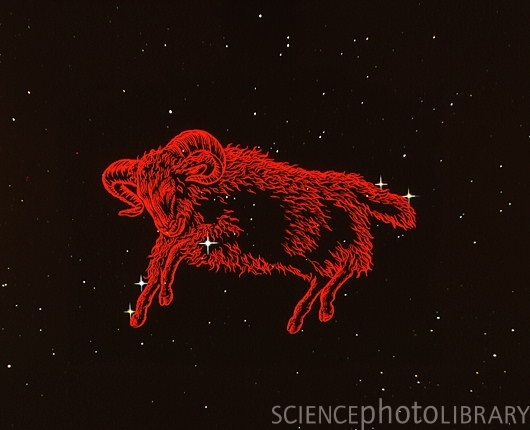