The Greatest Habits of Your Heart

The Power of Silence Part 1 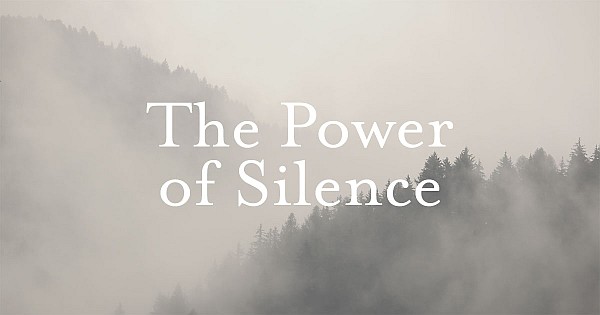 Not Just the Absence of Noise

“The one who sits in solitude and quiet has escaped from three wars: hearing, speaking, and seeing; yet against one thing shall he continually battle: that is, his own heart.” ~ Anthony of Egypt

One of the most intimidating of all environments for most people is the environment of silence. And, going along with that, most people misunderstand completely – and therefore misuse – the power of maintaining silence. Silence is a power and silence empowers. Silence nourishes you because in the stillness you become reflective, that is, once you learn how to become reflective. You learn to discern your distractions and to respond to your distractions in nondestructive ways. And through silence, you enter into the realm of your imagination, expanding your creativity beyond, well, beyond the width and breathe of your familiar, ordinary imagination. Before you can engage with profound silence, however, you have to understand the nature of silence.

PROFOUND SILENCE: Not Just the Absence of Noise

When I hear the word “silence”, memories still come to me of my grade school nuns saying, “You must observe silence in church” whereas in the classroom, they would say, “Be quiet now.” The distinction was made that “silence” was reserved for God but “quiet” referred to the quality of our behavior. I didn’t give that distinction any deeper thought while in grade school, of course, but as I penetrated the study of mysticism my appreciation for the power of silence has become more than apparent. Silence is an interior necessity. Quiet is merely the absence of noise. We are a culture surrounded by noise.

Restaurants blast music in the background – if you want to call it that noise music – often so loud that you have to scream at your dinner companions while dining. Why restaurant managers think that adds to dining comfort is beyond me. Sound blares at you from every mall and outside stores and shops in many places, even while you’re fueling your car at a gas station. Cities, of course, can’t help but be noisy, but that’s still what we can think of as society’s “surround sound.” Granted, most of us become numb to much of that noise after a while, but the fact is your psyche does not. Noise has become a constant companion to us far more than silence, and there are consequences to that which are more costly than can be measured. Silence is not just power, it is a very well-defined power that has the capacity to transform you or destroy you, depending on whether you engage its light or its shadow.

Just as a for instance, the practice of silence causes you to think before you act. I am reminded of a dinner party I attended a couple of years ago at which one guest, who was the Mother Reverend of a community of nuns, recalled an exchange she had with the local bishop. We were laughing about how even the convents had gone “high-tech” and that the nuns had learned how to use the internet. She had received a letter from the bishop who had requested that she respond immediately. Mother Reverend was irritated by this request because he had not given her the proper time required for her to reflect upon the questions being asked of her in the letter. She told him this in her email, adding that he had taken as much time as he required in constructing his letter to her and that she required as much time as needed because the answers she would give would influence the lives of all of the nuns in her community. This was not, incidentally, a power play between a Mother Reverend and a bishop. It was a conclusion drawn by a woman who was accustomed to the process of deep reflection before making serious decisions, taking her decision-making process into silence, particularly when she knew that her choices would have consequences for other people. Just because technology has given us the means to speed up communication should not suggest that technology has also given us the means to make better decisions at the same speed.

In fact, we have probably made more foolish choices than ever before, because we can act so fast and respond so rapidly that we can by-pass even the instincts of our conscience, much less our higher consciousness. Speed and high tech does not eclipse the need for wisdom and introspection. If anything, our rapid forms of communication, often taking place within environments filled with people traffic and countless other distractions, numb your guiding survival instincts.

In a more introspective setting where the distractions of sounds, interruptions and time pressures were less prevalent, your survival instincts would be on alert as you read each piece of mail, scanning the information that is coming into your field of life. Your survival instincts are primed to protect you from making foolish decisions, from violating your integrity and your honor, from making agreements that your instincts tell you are wrong for you, and from compromising yourself. Reading an email rapidly while distracted and responding rapidly can change your entire life—and not for the better. Many times I hear people laughingly say to others, “What were you thinking?” as a tail-end comment to a story about something they did. The implication of that comment is, of course, they weren’t thinking at all, which is why they made the poor choice they did. But deep and thoughtful thinking is not an art for us, nor is the practice of the application of wisdom in problem solving.

We are not a wisdom-oriented culture. We do not study wisdom and philosophy with passion or apply wisdom within our decision-making processes. Instead, we value quick problem-solving mechanics that produce quick outcomes. That doesn’t work for many situations, particularly more significant matters that come under the category of the meaning and purpose of life. Many of the challenges that arise in our lives are not easily settled by one quick choice. Situations that involve many people with whom you have long histories can be resolved in ways that serve all parties only after a period of deep reflection. Reflection requires that you enter into profound silence—not just quiet time, but silence in which you withdraw from the distractions of your life in order to give your full attention to the matter that has arisen. You have to remember that what comes about in your external life also causes turmoil internally. Going into silence helps you to identity the ingredients in that turmoil and to recognize the cycles of your life that are ending as well as the cycles that are beginning. Movement between cycles cannot be managed with a quick decision, just like that, as if periods of endings and beginnings were the same as a quick fix business crisis that is easily taken care of with one phone call.

To maneuver within the archetypal experience of a death and rebirth with such carelessness will automatically ensure that the new cycle of your life begins in a state of crisis, as you will have not ended the previous cycle with conscious thought. Silence is not just the absence of all this noise and chaos. Silence is the beginning point of your interior life. It draws you inward and engages you with your thoughts, and even with the words you use. On a more profound level, to become aware of the content of your thoughts and your choices of words is the beginning of becoming aware of the power that is contained in each word that you use. Then, of course, you have to ponder why you choose the words you do when you speak to each person that you do. Words can heal, words can destroy, words can unite people. Words are the most powerful tools in the world, which is why you should become highly aware of why you say what you do.

I rarely believe people who tell me that they didn’t know what they were saying when something careless came flying out of their mouths. That’s usually not true. What they really mean is that they had not intended to use that much power in that exchange, but they did mean to use those words, even if they have to blame the unconscious for it. Most people are quite aware of the power of silence, but in its shadow form. That is to say, many people use silence as a form of punishment and as a way of letting others know they feel angry or hurt about something. The “silent treatment” is a well-known practice of excluding another person from your personal boundaries and if you’ve ever practiced it, you know it’s very effective. Conversely, if you’ve ever been given the “cold shoulder,” you know it’s not the most pleasant experience in the world. But the person who enters into silence as a means of punishing another person soon discovers the mistake of misusing this profound power for harm rather than for reflection.

Going into silence with the intention of punishing another person leads you into the archives of your previous wounds, in which your only companion is your active imagination and the tainting lens of your injuries. The longer you stay in that dark pit of silence, the harder it is to pull yourself out of it. People have given family members the silent treatment for decades, even forgetting the original reason for not speaking. One woman actually said to me, “I haven’t spoken to my sister in over ten years. Can’t say I remember why. That’s just the way it is.” For her, ending the silent treatment with a phone call was incomprehensible. The silence had gone on far too long and the dark pit had become way too deep. That is the power of dark silence and it’s a lonely place to enter. Those who give others the silent treatment are, in fact, entering their own hell. Next week, we’ll discuss your practice of profound silence. Love, Caroline

+ - Credit Click to collapse
© 2017 Myss.com - Caroline Myss is a five-time New York Times bestselling author and internationally renowned speaker in the fields of human consciousness, and mysticism.
Here
back to top
Tweet

We have 1507 guests and no members online