The Gettysburg Address
A+ A A- 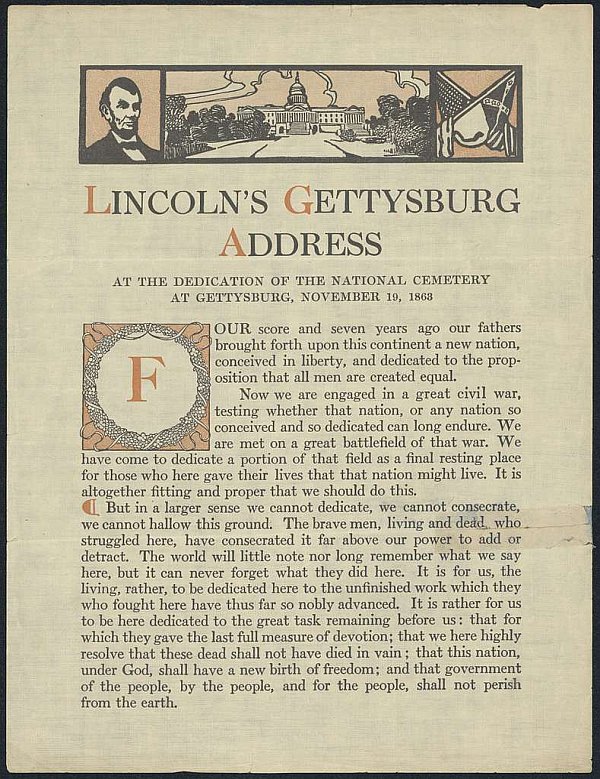 ...In just over two minutes, Lincoln invoked the principles of human equality espoused by the Declaration of Independence and redefined the Civil War as a struggle not merely for the Union, but as "a new birth of freedom" that would bring true equality to all of its citizens, ensure that democracy would remain a viable form of government, and would also create a unified nation in which states' rights were no longer dominant.

Beginning with the now-iconic phrase "Four score and seven years ago," referring to the American Revolution of 1776, Lincoln examined the founding principles of the United States in the context of the Civil War, and used the ceremony at Gettysburg as an opportunity not only to consecrate the grounds of a cemetery, but also to exhort the listeners (and the nation) to ensure the survival of America's representative democracy, that the "government of the people, by the people, for the people, shall not perish from the earth."

Without getting into how the government of our democratic republic has been hijacked by men and women of small minds and even smaller hearts, here's the text of what the great Aquarius Abraham Lincoln offered:

Four score and seven years ago our fathers brought forth on this continent a new nation, conceived in liberty, and dedicated to the proposition that all men are created equal.

Now we are engaged in a great civil war, testing whether that nation, or any nation, so conceived and so dedicated, can long endure. We are met on a great battle-field of that war. We have come to dedicate a portion of that field, as a final resting place for those who here gave their lives that that nation might live. It is altogether fitting and proper that we should do this.

But, in a larger sense, we can not dedicate, we can not consecrate, we can not hallow this ground. The brave men, living and dead, who struggled here, have consecrated it, far above our poor power to add or detract. The world will little note, nor long remember what we say here, but it can never forget what they did here. It is for us the living, rather, to be dedicated here to the unfinished work which they who fought here have thus far so nobly advanced. It is rather for us to be here dedicated to the great task remaining before us—that from these honored dead we take increased devotion to that cause for which they gave the last full measure of devotion—that we here highly resolve that these dead shall not have died in vain—that this nation, under God, shall have a new birth of freedom—and that government of the people, by the people, for the people, shall not perish from the earth.

As I walked the battlefield grounds 8 years ago on Dia de los Muertos, or Day of the Dead, I was overwhelmed by feelings of how so many had died in that battle. I felt the awesome carnage of thousands of mangled bodies, the stunning pain and suffering of so many who had thrown themselves into harm's way for whatever cause they believed in.

While I still believe that the phrase "useless war" is a redundancy, this speech is neither useless nor redundant. In it we find Lincoln invoking "... a new birth of freedom—and that government of the people, by the people, for the people, shall not perish from the earth."

May it be that all nations come together to affirm these ideals, and that freedom becomes the standard for all people on Earth without the terrible cost of war. That would be an Aquarian dream come true.

We have 702 guests and no members online