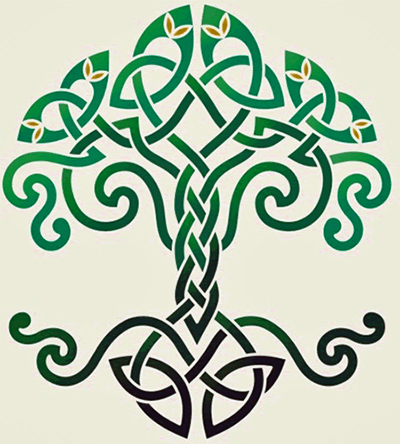 Celtic Astrology was created by the Druids sometime around 1000 BC. The Druid religion was based on 3 basic strands of belief: the first was to remember their ancestors and the past; the second was to have an understanding of nature so that they could work with it, not against it; and the third was to explore the connection of everyday reality with that of the spiritual realm.

In Celtic astrology, the zodiac is based on the trees that the Druids held sacred. It was believed that the trees themselves expressed personal characteristics that could then be associated with particular months of the year. This was done by connecting the tree to a lunar month through the use of the consonants in the Celtic alphabet. 13 of the consonants form the calendar of seasonal magic, and the 5 vowels represent complementary seasonal stations.

Unlike the Greco-Roman zodiac, the Celtic calendar has 13 astrological signs based on lunar months. Each month contains 28 days, except the last one (Ruis/Elder) which only has 24. However, the Celtic zodiac isn't confined solely to the lunar cycle. The Druids split their years into 2 halves: the dark half and the light half to represent the recurring cycle of birth, life, death, and rebirth. As a result the Druids developed a zodiac rooted in both the lunar and solar cycles of life.

The 13 tree months each correspond to;

It is especially interesting to compare the Celtic moon cycles with the traditional zodiac sun cycle. 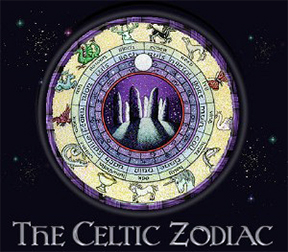 Celtic traditions were oral legends and history passed down through the generations, and because there is no written record of the intimate beliefs of the Celts, there is no way to positively determine whether or not they practiced astrology fervently.

What is known, however, is that the Celtic priests - druids - divided the calendar into thirteen months based on the lunar cycle. That lunar cycle was frequently associated with different species of trees sacred to the Celts because their concept of the universe was an image of a gigantic tree with its roots bound in the earth and its branches stretching to the heavens.

Tree spirits, called dryads, were said to have distinct personalities and to inhabit each species of tree, and each lunar month became associated with a specific type of tree and therefore with different personality traits. Today, that connection to trees is believed to be the basis of Celtic astrology.

The Druids religion drew primarily upon both natural and supernatural energies. Spirits who lived in ancient trees held these energies and the tree themselves were considered living. The Druids believed that humans descended from the trees and each tree type held mysterious and magical traits. These traits were encoded in the alphabet called Ogham (also referred to as the Celtic Tree Alphabet). It was this alphabet that Robert Graves, an English poet, novelist and scholar, used as a basis for Celtic Astrology.

There are two variations of Celtic Astrology. One that chooses 13 months and gives you a reading based upon your date of birth falli8ng in one of those months.  The other version is far more granular and can been seen below.

The dates and corresponding trees are as follows:

Each tree is believed to have basic characteristics, which is said to be found in people based on their birth date.

Celtic astrology is just another means to understanding others and ourselves. Many believe that our birth dates often dictate, at least in part, who we are and having an understanding of the traits associated with a particular date helps us learn better how to deal with our moods and those of others.