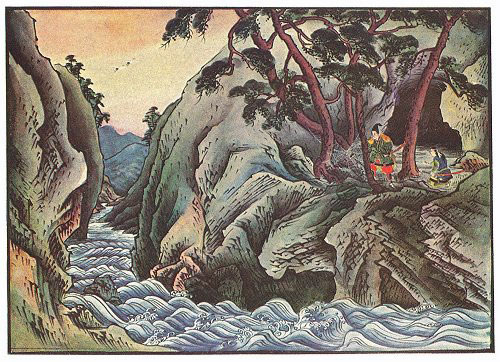 DURING the reign of the Emperor Shirakawa, which was between the years 1073 and 1086 A.D., there lived a general whose name was Yogodayu. He had built a fort for himself and his small army in the wilds of Yamato, not far from the Mountain of Kasagi, where, about the year 1380, the unfortunate Emperor Go-Daigo camped among the same rocky fastnesses and eventually perished. Even to-day, as one winds in and out of the narrow gorge where the railway passes Kasagi, in the Kizugawa valley, one is struck by the extreme wildness of the scenery. Here it was that Yogodayu built his fort. Some months later he was attacked by his wife's brother, whom he detested, and got badly beaten, so much so as to have only some twenty warriors left alive. With these he escaped to Kasagi Mountain, and hid himself for two days in a cave, in fear and trembling that he should be discovered. On the third day Yogodayu, finding that he was not pursued, ventured forth to admire the scenery. While thus occupied he saw a bee in a large spider's-web struggling in vain to free itself. Struggle as it might, it only made things worse. Yogodayu, feeling sympathy for the bee, relieved it from its captivity and let it fly, saying:

'Ah, little bee! fly back to liberty and to your hive. I wish I could do the same. It is a pleasure to relieve those in captivity, even though one is at the mercy of one's enemy, as I am.'

That night Yogodayu dreamed that a man dressed in black and yellow saluted him, and said: 'Sir, I have come to tell you that it is my desire to help you and fulfil the resolve which I came to this morning.'

'And who, pray, may you be?' answered Yogodayu in his dream.

'I am the bee whom you released from the spider's web, and deeply grateful; so much so that I have thought out a plan by which you can defeat your enemy and regain your lost fortune.'

'How is it possible for me to defeat my enemy with only a remnant of my force--some twenty warriors?' quoth Yogodayu.

'It is very simple,' was the answer. 'Follow exactly the instructions I give you, and you shall see.'

'But I have no walls behind which the few friends I have can make a show of fighting. It is impossible for me to attack my enemy.'

The bee smiled and said: 'You shall not want walls. You shall be attacked, and, with the help of some ten millions of the bees of Yamato, you shall put your enemies to rout. Listen! When you have fixed upon the day and the place where you will fight your brother-in-law, build a wooden house, place in it as many hundred empty jars and receptacles as your men can find, so that we bees may come and hide in them. You must live in the house with your twenty and odd men, and manage to let your enemy know where you are, and that you are collecting a force to attack him. It will then not be long before he attacks you. When he does, we bees will come out in our millions and help you. You are sure of victory. Fear nothing; but do as I say.'

As Yogodayu was about to speak the bee disappeared, and he awoke from his dream. Deeply impressed, he related it to his men. It was arranged that these should split themselves up into couples and return to their native province, collect what men they could, and be back at the cave some thirty days later. Yogodayu went off alone. Thirty days later they all met again at the cave on Kasagi yama. Altogether they were now eighty men. Quietly they set to, and, following the bee's advice, built a wooden . house at the entrance of the valley, and put therein some two thousand jars. No sooner had this been done than the bees arrived in countless thousands, until there must have been well-nigh two millions. One of Yogodayu's men was sent to propagate reports that he was strongly fortifying himself.

Two days later his brother-in-law came to attack him.

Yogodayu began fighting carelessly, so as to draw the enemy, who, seeing this, came on in full force and in a most unguarded way. As soon as the whole of the enemy's force lay revealed, the bees swarmed out of their hiding-places, and flew among them in such blinding swarms--stinging as they went here, there, and everywhere--that there was no standing against them. The enemy, without a single exception, turned and ran. They were pursued by the bees, and by Yogodayu's eighty men, who simply cut them down as they liked, for each of the enemy had fully 3000 bees attending him. Many lost their minds and went mad.

Thus, after completely defeating his old enemy, Yogodayu became repossessed of his fortress; and, to commemorate the event, he built a small temple at the back of Kasagi yama. All the dead bees that could be found were collected and buried there, and once a-year during the rest of his life Yogodayu used to go and worship there.