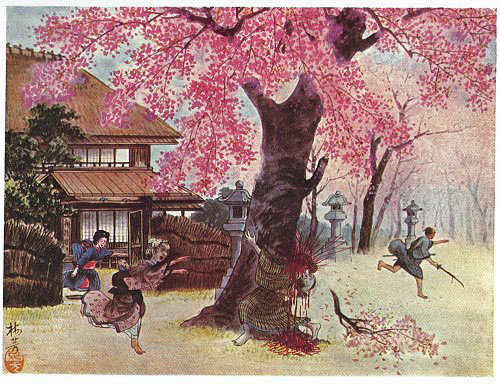 THE Japanese say that ghosts in inanimate nature generally have more liveliness than ghosts of the dead. There is an old proverb which says something to the effect that 'the ghosts of trees love not the willow'; by which, I suppose, is meant that they do not assimilate. In Japanese pictures of ghosts there is nearly always a willow tree. Whether Hokusai, the ancient painter, or Okyo Maruyama, a famous painter of Kyoto of more recent date, was responsible for the pictures with ghosts and willow trees, I do not know; but certainly Maruyama painted many ghosts under willow trees--the first from his wife, who lay sick.

Exactly what this has to do with the following story I cannot see; but my story-teller began with it.

In the northern part of Kyoto is a Shinto temple called Hirano. It is celebrated for the fine cherry trees that grow there. Among them is an old dead tree which is called 'Jirohei,' and is much cared for; but the story attached to it is little known, and has not been told, I believe, to a European before.

During the cherry blossom season many people go to view the trees, especially at night.

Close to the Jirohei cherry tree, many years ago, was a large and prosperous tea-house, once owned by Jirohei, who had started in quite a small way. So rapidly did he make money, he attributed his success to the virtue of the old cherry tree, which he accordingly venerated. Jirohei paid the greatest respect to the tree, attending to its wants. He prevented boys from climbing it and breaking its branches. The tree prospered, and so did he.

One morning a samurai (of the blood-and-thunder kind) walked up to the Hirano Temple, and sat down at Jirohei's tea-house, to take a long look at the cherry blossom. He was a powerful, dark-skinned, evil-faced man about five feet eight in height.

'Are you the landlord of this tea-house?' asked he.

'Nothing: I thank you,' said the samurai. 'What a fine tree you have here opposite your tea-house!'

'Yes, sir: it is to the fineness of the tree that I owe my prosperity. Thank you, sir, for expressing your appreciation of it.'

'I want a branch off the tree,' quoth the samurai, 'for a geisha.'

'Deeply as I regret it, I am obliged to refuse your request. I must refuse everybody. The temple priests gave orders to this effect before they let me erect this place. No matter who it may be that asks, I must refuse. Flowers may not even be picked off the tree, though they may be gathered when they fall. Please, sir, remember that there is an old proverb which tells us to cut the plum tree for our vases, but not the cherry!'

'You seem to be an unpleasantly argumentative person for your station in life,' said the samurai. 'When I say that I want a thing I mean to have it: so you had better go and cut it.'

'However much you may be determined, I must refuse,' said Jirohei, quietly and politely.

'And, however much you may refuse, the more determined am I to have it. I as a samurai said I should have it. Do you think that you can turn me from my purpose? If you have not the politeness to get it, I will take it by force.' Suiting his action to his words, the samurai drew a sword about three feet long, and was about to cut off the best branch of all. Jirohei clung to the sleeve of his sword arm, crying:

'I have asked you to leave the tree alone; but you would not. Please take my life instead.'

'You are an insolent and annoying fool: I gladly follow your request'; and saying this the samurai stabbed Jirohei slightly, to make him let go the sleeve. Jirohei did let go; but he ran to the tree, where in a further struggle over the branch, which was cut in spite of Jirohei's defence, he was stabbed again, this time fatally. The samurai, seeing that the man must die, got away as quickly as possible, leaving the cut branch in full bloom on the ground.

Hearing the noise, the servants came out of the house, followed by Jirohei's poor old wife.

It was seen that Jirohei himself was dead; but he clung to the tree as firmly as in life, and it was fully an hour before they were able to get him away.

From this time things went badly with the tea-house. Very few people came, and such as did come were poor and spent but little money. Besides, from the day of the murder of Jirohei the tree had begun to fade and die; in less than a year it was absolutely dead. The tea-house had to be closed for want of funds to keep it open. The old wife of Jirohei had hanged herself on the dead tree a few days after her husband had been killed.

People said that ghosts had been seen about the tree, and were afraid to go there at night. Even neighbouring tea-houses suffered, and so did the temple, which for a time became unpopular.

The samurai who had been the cause of all this kept his secret, telling no one but his own father what he had done; and he expressed to his father his intention of going to the temple to verify the statements about the ghosts. Thus on the third day of March in the third year of Keio (that is, forty-two years ago) he started one night alone and well armed, in spite of his father's attempts to stop him. He went straight to the old dead tree, and hid himself behind a stone lantern.

To his astonishment, at midnight the dead tree suddenly came out into full bloom, and looked just as it had been when he cut the branch and killed Jirohei.

On seeing this he fiercely attacked the tree with his keen-edged sword. He attacked it with mad fury, cutting and slashing; and he heard a fearful scream which seemed to him to come from inside the tree.

After half an hour he became exhausted, but resolved to wait until daybreak, to see what damage he had wrought. When day dawned, the samurai found his father lying on the ground, hacked to pieces, and of course dead. Doubtless the father had followed to try and see that no harm came to the son.

The samurai was stricken with grief and shame. Nothing was left but to go and pray to the gods for forgiveness, and to offer his life to them, which he did by disemboweling himself.

From that day the ghost appeared no more, and people came as before to view the cherry-bloom by night as well as by day; so they do even now. No one has ever been able to say whether the ghost which appeared was the ghost of Jirohei, or that of his wife, or that of the cherry tree which had died when its limb had been severed.