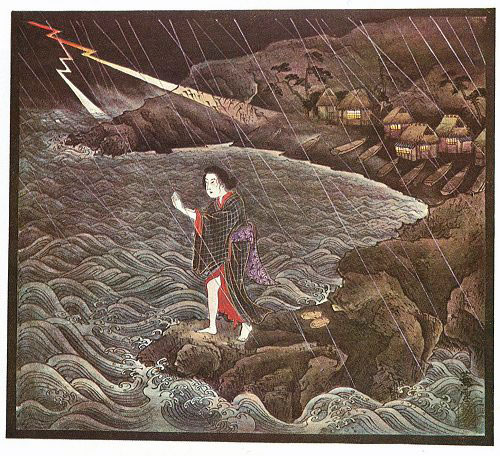 HATSUSHIMA ISLAND is probably unknown to all foreigners, and to 9999 out of every 10,000 Japanese; consequently, it is of not much importance. Nevertheless, it has produced quite a romantic little story, which was told to me by a friend who had visited there some six years before.

The island is about seven miles south-east of Atami, in Sagami Bay (Izu Province). It is so far isolated from the mainland that very little intercourse goes on with the outer world. Indeed, it is said that the inhabitants of Hatsushima Island are a queer people, and prefer keeping to themselves. Even to-day there are only some two hundred houses, and the population cannot exceed a thousand. The principal production of the island is, of course, fish; but it is celebrated also for its jonquil flowers (suisenn). Thus it will be seen that there is hardly any trade. What little the people buy from or sell to the mainland they carry in their own fishing-boats. In matrimony also they keep to themselves, and are generally conservative and all the better for it.

There is a well-known fisherman's song of Hatsushima Island. It means something like the following, and it is of the origin of that queer verse that the story is:--

Many years ago there lived on the island the daughter of a fisherman whose beauty even as a child was extraordinary. As she grew, Cho--for such was her name--improved in looks, and, in spite of her lowly birth, she had the manners and refinement of a lady. At the age of eighteen there was not a young man on the island who was not in love with her. All were eager to seek her hand in marriage; but hardly any dared to ask, even through the medium of a third party, as was usual.

Amongst them was a handsome fisherman of about twenty years whose name was Shinsaku. Being less simple than the rest, and a little more bold, he one day approached Gisuke, O Cho's brother, on the subject. Gisuke could see nothing against his sister marrying Shinsaku; indeed, he rather liked Shinsaku; and their families had always been friends. So he called his sister O Cho down to the beach, where they were sitting, and told her that Shinsaku had proposed for her hand in marriage, and that he thought it an excellent match, of which her mother would have approved had she been alive. He added: 'You must marry soon, you know. You are eighteen, and we want no spinsters on Hatsushima, or girls brought here from the mainland to marry our bachelors.'

'Stay, stay, my dear brother! I do not want all this sermon on spinsterhood,' cried O Cho. 'I have no intention of remaining single, I can tell you; and as for Shinsaku I would rather marry him than any one else--so do not worry yourself further on that account. Settle the day of the happy event.'

Needless to say, young Gisuke was delighted, and so was Shinsaku; and they settled that the marriage should be three days thence.

Soon, when all the fishing-boats had returned to the village, the news spread; and it would be difficult to describe the state of the younger men's feelings. Hitherto every one had hoped to win the pretty O Cho San; all had lived in that happy hope, and rejoiced in the uncertain state of love, which causes such happiness in its early stages. Shinsaku had hitherto been a general favourite. Now the whole of their hopes were dashed to the ground. O Cho was not for any of them. As for Shinsaku, how they suddenly hated him! What was to be done? they asked one another, little thinking of the comical side, or that in any case O Cho could marry only one of them.

No attention was paid to the fish they had caught; their boats were scarcely pulled high enough on the beach for safety; their minds were wholly given to the question how each and every one of them could marry O Cho San. First of all, it was decided to tell Shinsaku that they would prevent his marriage if possible. There were several fights on the quiet beach, which had never before been disturbed by a display of ill-feeling. At last Gisuke, O Cho's brother, consulted with his sister and Shinsaku; and they decided, for the peace of the island, to break off the marriage, O Cho and her lover determining that at all events they would marry no one else.

However, even this great sacrifice had no effect. There were fully thirty men; in fact, the whole of the bachelors wanted to marry O Cho; they fought daily; the whole island was thrown into a discontent. Poor O Cho San! What could she do? Had not she and Shinsaku done enough already in sacrificing happiness for the peace of the island? There was only one more thing she could do, and, being a Japanese girl, she did it. She wrote two letters, one to her brother Gisuke, another to Shinsaku, bidding them farewell. 'The island of Hatsushima has never had trouble until I was born,' she said. 'For three hundred years or more our people, though poor, have lived happily and in peace. Alas! now it is no longer so, on account of me. Farewell! I shall be dead. Tell our people that I have died to bring them back their senses, for they have been foolish about me. Farewell!'

After leaving the two letters where Gisuke slept, O Cho slipped stealthily out of the house (it was a pouring-wet and stormy night and the 10th of June), and cast herself into the sea from some rocks near her cottage, after well loading her sleeves with stones, so that she might rise no more.

Next morning, when Gisuke found the letters, instinctively he knew what must have happened, and rushed from the house to find Shinsaku. Brother and lover read their letters together, and were stricken with grief, as, indeed, was everyone else. A search was made, and soon O Cho's straw slippers were found on the point of rocks near her house. Gisuke knew she must have jumped into the sea here, and he and Shinsaku dived down and found her body lying at the bottom. They brought it to the surface, and it was buried just beyond the rocks on which she had last stood.

From that day Shinsaku was unable to sleep at night. The poor fellow was quite distracted. O Cho's letter and straw slippers he placed beside his bed and surrounded them with flowers. His days he spent decorating and weeping over her tomb.

At last one evening Shinsaku resolved to make away with his own body, hoping that his spirit might find O Cho; and he wandered towards her tomb to take a last farewell. As he did so he thought he saw O Cho, and called her aloud three or four times, and then with outstretched arms he rushed delightedly at her. The noise awoke Gisuke, whose house was close to the grave. He came out, and found Shinsaku clasping the stone pillar which was placed at its head.

Shinsaku explained that he had seen the spirit of O Cho, and that he was about to follow her by taking his life; but from this he was dissuaded.

'Do not do that; devote your life, rather, and I will help with you in building a shrine dedicated to Cho. You will join her when you die by nature; but please her spirit here by never marrying another.'

Shinsaku promised. The young men of the place now began to be deeply sorry for Shinsaku. What selfish beasts they had been! they thought. However, they would mend their ways, and spend all their spare time in building a shrine to O Cho San; and this they did. The shrine is called 'The Shrine of O Cho San of Hatsushima,' and a ceremony is held there every 10th of June. Curious to relate, it invariably rains on that day, and the fishermen say that the spirit of O Cho comes in the rain. Hence the song:--

The shrine still stands, I am told.