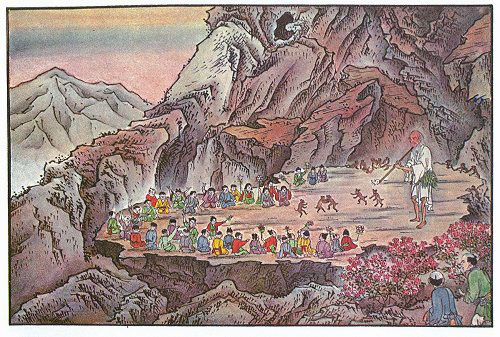 MANY years ago there lived in the village of Nomugi, in Hida Province, an old farmer named Jinnai, with his wife. They had a daughter on whom they simply doted. Her name was Yuka. She was seven years of age, and an extremely beautiful child. Unfortunately, just at this age she developed something the matter with her leg, which grew worse and worse until the limb became deformed. O Yuka suffered no pain; but her parents were much troubled. Doctors, drugs, and the advice of many friends made Yuka's leg no better.

'How sad it will be for her later on!' thought her mother and father. 'Even now it is sad that she should have a deformed leg when she plays with other children.'

There being no help, Yuka and her parents had to make the best of things. In any case, Yuka was not the only deformity in the village. There were other cases.--One of Yuka's boy playmates, Tarako, had been born blind; and another, Rinkichi, was so deaf that he could hold his ear to the temple bell while the other children struck it, and he never heard the sound, though he felt a vibration. Well, these two were perhaps no better off than Yuka, and at last her parents began to console themselves. The child played about and seemed perfectly happy.

Nomugi village is at the foot of the great mountain Norikuradake, which rises 10,500 feet, and is a wild place of volcanic origin.

Many of the children of Nomugi used to go daily and play on the grassy slope of an old dam at the end of the village. They would throw stones into the water, fish, sail boats, and pick flowers. The dam was a kind of club for the children. From morning to evening they were there, having with them their rice to eat.

One day, while thus playing, they were surprised by an old man with a long white beard approaching them. He came from the direction of the mountain. All stopped their games to watch him. He came on into their midst, and, patting them on the head, seemed to make friends naturally. Taking notice of Yuka's bad leg, the old man said: 'Come! How is this? Have not your parents tried to cure it?' Little Yuka answered that they had, but that they could not do any good. The old man made her lie down on the grass, and began to manipulate the leg, pulling it this way and that way, and rubbed in some red medicine which he took from a case. The old man then operated on Tarako the blind boy, and on Rinkichi the deaf one.

'Now, my children,' said he, 'you all love your fathers and mothers, and it will be a great pleasure to them to find you cured of your ailments. You are not well yet; but you will be, if you do what I tell you, in less than three or four days. You are not to mention having seen me until I tell you that you may--after you are cured. Tomorrow you will meet me at the flat rock under the cave on Mount Norikuradake. You know the place. Very well: until tomorrow good-bye, and if I find you do as I tell you I will make you all laugh by showing you some fancy tricks.' Then he trudged off in the direction whence he had come.

The children continued their play, thinking 'What a nice old man!' And, strange to say, O Yuka, as she walked home, felt her leg to be of greater use.

Very little attention is paid to Japanese children. They are nearly always good and well-behaved, little grown-up people in fact; and therefore they ate their suppers and went to bed as such, giving no account of their day's amusements, or of the strange old man.

Next day they went to the flat rock. As it was wet, they had not started until late; but they found the old man, and, though he had no time to play with them and show the tricks which he had promised, he attended to Yuka's leg, and to the dumb boy and the blind.

'Now go home,' he said, 'and come back here tomorrow. By the time you get home Yuka's leg will be well, Tarako will be able to see, and Rinkichi able to hear; and I am sure your relations will be delighted. Tomorrow, if it is fine, you must come early, and we shall have lots of fun.'

Even before they got home everything came about as the old man had said. The three children were recovered. The villagers and the parents rejoiced together; but all were mystified as to who the magician could be.

'If he returns to the mountain, as the children say, then he must live in the cave,' said one. 'He must be a Sennin,' said another. 'It is rumoured that the most famous priest, Kukai shonin, who founded the sacred temple on Mount Koyasan, in Kii Province, was able to make these wondrous cures in children,' added another. But, with all the gossiping and conjectures, none could explain how it was possible to bring sight to a boy who had been born blind. At last some one suggested that two or three should follow the children secretly on the following day: by hiding themselves they might be able to see what happened. This excellent plan was adopted.

In the morning about thirty children started off at daybreak, followed, unknown to themselves, by two men of the village.

When the children arrived at the flat rock--which is said to be large enough to measure one thousand Japanese mats of six feet by three feet--they found the old man seated at one end of it. The two men who had followed hid themselves in some fine azalea bushes.

First they saw the old man rise to his feet, and then go over to the children and hear from the three cured ones how they felt, and how their parents had been pleased. Tarako was the most delighted, perhaps, of the three; for he had never seen the world before, or even his parents.

'Now, my children, you have come here to see me, and I am going to amuse you all. See here!' Saying this, the old man picked up some dead sticks, and, blowing at their ends, produced blossoming cherry branches, plum blossoms, and peach, and handed a branch of each to the girls. Next he took a stone and threw it into the air, and behold! it turned into a dove. Another turned into a hawk, or, in fact, into any bird a boy chose to name.

'Now,' said the old man, 'I will show you some animals that will make you laugh.' He recited some mystic verse, and monkeys came leaping on the flat rock and began to wrestle with one another. The children clapped their hands in delight; but one of the men who was hidden exclaimed in his astonishment:

'Who can this wizard be? No other but a wizard could do such things!'

The venerable old man heard, and, looking cautiously round, said:

'Children, I can do no more tricks to-day. My spell has gone. I will go to my home, and you had better go to yours. Farewell.'

So saying, the old man bowed to them, and turned up the mountain path, taking the direction of the cave.

The two men came out from their hiding, and they, with the children, tried to follow him. In spite of his great age, he was much more nimble than they among the rocks; but they got far enough to see him enter the cave. Some minutes later they came to the entrance, and bowed before it. The entrance was surrounded by fragrant flowers; but into its dark depths they did not venture.

Suddenly O Yuka pointed upwards, crying, 'There is the old grandfather!' They all looked up; and standing on a cloud was the old man, right over the summit of the mountain.

'Ah, now it is quite clear!' cried one of the men. 'It is the famous hermit of Mount Norikuradake.' They all bowed low, and then went home to report to the villagers what they had seen.

Subscriptions were collected; a small temple was built inside the cave, and they called it the 'Sendokutsu Temple,' which means The Sennin's Temple.