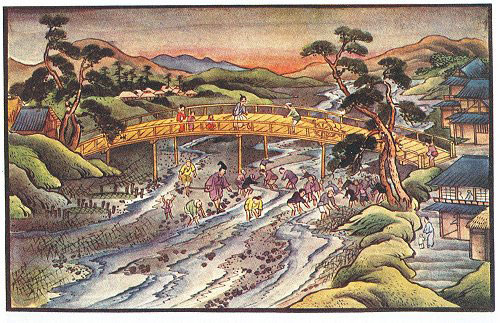 One day he went to worship at the shrine of Tsurugaoka in Kamakura. That same evening he dreamed that one of the gods appeared to him and said:

'Hojo Tokiyori, you are very young for a ruler, and there are some who will try to deceive you, for honest men are scarce. There is one man who is of exceptional honesty, however, and if you wish to govern the people successfully it would be advisable to employ him. His name is Awoto Fujitsuna.'

Hojo Tokiyori told him of his dream. 'Nay,' said he; it was more than a dream: it was a vision that called upon me to appoint you to the post, which I have done.'

'Ah, indeed!' quoth Awoto Fujitsuna. 'Then, sir, if you appoint high officials as the result of dreams and visions, it is a risky matter, for by those dreams we may someday be ordered to be beheaded!

Hojo Tokiyori laughed at this, and said he hoped not. Awoto Fujitsuna turned out a most excellent and trustworthy official, popular, just, and honest. No one had a word against him, and Hojo Tokiyori was delighted.

One day Fujitsuna was carrying over a bridge a bag of money belonging to the Government. He fell, and the bag burst. Fujitsuna collected the money--with the exception of a half-cent piece, which had rolled in some way over the edge of the bridge and fallen into the river.

Fujitsuna could have let it go, putting another in its place; but that course would not have been up to the high standard of his morals in such matters. He had lost a half-cent which belonged to the Government. It was, he knew, in the river. Consequently, he refused to move on until it was recovered. That was clearly his duty. Awoto Fujitsuna ran to the houses at either end of the bridge, telling the villagers merely that he had dropped some Government money into the river--would they come and help him to find it? Of course they would, ready to help as the Japanese country-men have been from time immemorial. All followed Fujitsuna into the river--men, women, and children--and a diligent search was kept up by several hundreds for many hours, without result, when at last, just as the sun was setting, an old farmer picked up the half-cent, which he presented to Fujitsuna.

Fujitsuna was delighted, and told the people that things were all right now: he had recovered the money--thanks to the quick sight of the farmer.

'My friends,' said Fujitsuna, 'the half-cent is all that was lost; but that half-cent was not mine; it was part of the Government treasure, and was entrusted to me, and it was my duty to recover it. Here are thirty yen for you who have helped me to find it, to spend in sake. That is my money; and remember what I tell you--that, no matter how small a thing is entrusted to you by the Government, you must not lose it, but give up your life and fortune sooner.'

The villagers were much impressed with this great honesty and way of reasoning.

Hojo Tokiyori, on hearing the little story, sent for and promoted Awoto Fujitsuna to a higher position than he had held before; but, in spite of his advances and riches, the minister continued to work hard, to eat simple food, and to put on plain raiment, living in a cottage instead of occupying a palace, and devoting his life to his country.

We have 1896 guests and no members online