A Story of Oki Islands 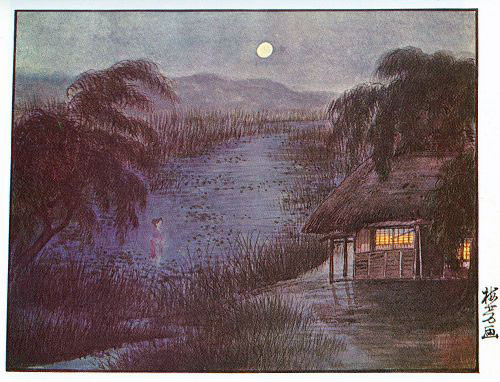 IN the first year of Bunkiu, 1861-1864, there lived a man called Yehara Keisuke in Kasumigaseki, in the district of Kojimachi. He was a hatomoto--that is, a feudatory vassal of the Shogun--and a man to whom some respect was due; but apart from that, Yehara was much liked for his kindness of heart and general fairness in dealing with people. In Iidamachi lived another hatomoto, Hayashi Hayato. He had been married to Yehara's sister for five years. They were exceedingly happy; their daughter, four years old now, was the delight of their hearts. Their cottage was rather dilapidated; but it was Hayashi's own, with the pond in front of it, and two farms, the whole property comprising some two hundred acres, of which nearly half was under cultivation. Thus Hayashi was able to live without working much. In the summer he fished for carp; in the winter he wrote much, and was considered a bit of a poet.

At the time of this story, Hayashi, having planted his rice and sweet potatoes (sato-imo), had but little to do, and spent most of his time with his wife, fishing in his ponds, one of which contained large suppon (terrapin turtles) as well as koi (carp). Suddenly things went wrong.

Yehara was surprised one morning to receive a visit from his sister O Kome.

'I have come, dear brother,' she said, 'to beg you to help me to obtain a divorce or separation from my husband.'

'Divorce! Why should you want a divorce? Have you not always said you were happy with your husband, my dear friend Hayashi? For what sudden reason do you ask for a divorce? Remember you have been married for five years now, and that is sufficient to prove that your life has been happy, and that Hayashi has treated you well.'

At first O Kome would not give any reason why she wished to be separated from her husband; but at last she said:

'Brother, think not that Hayashi has been unkind. He is all that can be called kind, and we deeply love each other; but, as you know, Hayashi's family have owned the land, the farms on one of which latter we live, for some three hundred years. Nothing would induce him to change his place of abode, and I should never have wished him to do so until some twelve days ago.'

'What has happened within these twelve wonderful days?' asked Yehara.

'Dear brother, I can stand it no longer,' was his sister's answer. 'Up to twelve days ago all went well; but then a terrible thing happened. It was very dark and warm, and I was sitting outside our house looking at the clouds passing over the moon, and talking to my daughter. Suddenly there appeared, as if walking on the lilies of the pond, a white figure. Oh, so white, so wet, and so miserable to look at! It appeared to arise from the pond and float in the air, and then approached me slowly until it was within ten feet. As it came my child cried: "Why, mother, there comes O Sumi--do you know O Sumi?" I answered her that I did not, I think; but in truth I was so frightened I hardly know what I said. The figure was horrible to look at. It was that of a girl of eighteen or nineteen years, with hair dishevelled and hanging loose, over white and wet shoulders. Help me! help me!" cried the figure, and I was so frightened that I covered my eyes and screamed for my husband, who was inside. He came out and found me in a dead faint, with my child by my side, also in a state of terror. Hayashi had seen nothing. He carried us both in, shut the doors, and told me I must have been dreaming. "Perhaps," he sarcastically added, "you saw the kappa which is said to dwell in the pond, but which none of my family have seen for over one hundred years." That is all that my husband said on the subject. Next night, however, when in bed, my child seized me suddenly, crying in terror-stricken tones, "O Sumi--here is O Sumi--how horrible she looks! Mother, mother, do you see her?" I did see her. She stood dripping wet within three feet of my bed, the whiteness and the wetness and the dishevelled hair being what gave her the awful look which she bore. "Help me! Help me!" cried the figure, and then disappeared. After that I could not sleep; nor could I get my child to do so. On every night until now the ghost has come--O Sumi, as my child calls her. I should kill myself if I had to remain longer in that house, which has become a terror to myself and my child. My husband does not see the ghost, and only laughs at me; and that is why I see no way out of the difficulty but a separation.'

Yehara told his sister that on the following day he would call on Hayashi, and sent his sister back to her husband that night.

Next day, when Yehara called, Hayashi, after hearing what the visitor had to say, answered:

'It is very strange. I was born in this house over twenty years ago; but I have never seen the ghost which my wife refers to, and have never heard about it. Not the slightest allusion to it was ever made by my father or mother. I will make inquiries of all my neighbours and servants, and ascertain if they ever heard of the ghost, or even of anyone coming to a sudden and untimely end. There must be something: it is impossible that my little child should know the name Sumi," she never having known any one bearing it.'

Inquiries were made; but nothing could be learned from the servants or from the neighbours. Hayashi reasoned that, the ghost being always wet, the mystery might be solved by drying up the pond--perhaps to find the remains of some murdered person, whose bones required decent burial and prayers said over them.

The pond was old and deep, covered with water plants, and had never been emptied within his memory. It was said to contain a kappa (mythical beast, half-turtle, half-man). In any case, there were many terrapin turtle, the capture of which would well repay the cost of the emptying. The bank of the pond was cut, and next day there remained only a pool in the deepest part; Hayashi decided to clear even this and dig into the mud below.

At this moment the grandmother of Hayashi arrived, an old woman of some eighty years, and said:

'You need go no farther. I can tell you all about the ghost. O Sumi does not rest, and it is quite true that her ghost appears. I am very sorry about it, now in my old age; for it is my fault--the sin is mine. Listen and I will tell you all.'

Every one stood astonished at these words, feeling that some secret was about to be revealed.

'When Hayashi Hayato, your grandfather, was alive, we had a beautiful servant girl, seventeen years of age, called O Sumi. Your grandfather became enamoured of this girl, and she of him. I was about thirty at that time, and was jealous, for my better looks had passed away. One day when your grandfather was out I took Sumi to the pond and gave her a severe beating. During the struggle she fell into the water and got entangled in the weeds; and there I left her, fully believing the water to be shallow and that she could get out. She did not succeed, and was drowned. Your grandfather found her dead on his return. In those days the police were not very particular with their inquiries. The girl was buried; but nothing was said to me, and the matter soon blew over. Fourteen days ago was the fiftieth anniversary of this tragedy. Perhaps that is the reason of Sumi's ghost appearing; for appear she must, or your child could not have known of her name. It must be as your child says, and that the first time she appeared Sumi communicated her name.'

The old woman was shaking with fear, and advised them all to say prayers at O Sumi's tomb. This was done, and the ghost has been seen no more. Hayashi said:

'Though I am a samurai, and have read many books, I never believed in ghosts; but now I do.'