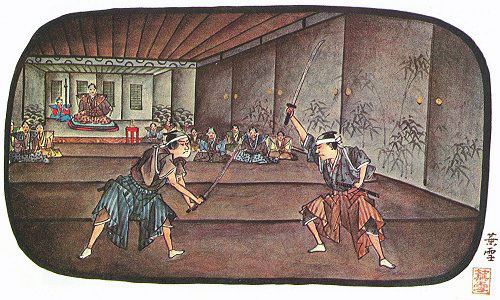 HARADA KURANDO was one of the leading vassals of the Lord of Tsugaru. He was a remarkable swordsman, and gave lessons in fencing. Next in seniority to Harada among the vassals was one Gundayu, who also taught fencing; but he was no match for the famous Harada, and consequently was somewhat jealous.

One day, to encourage the art of fencing amongst his vassals, the Daimio summoned all his people and ordered them to give an exhibition in his presence.

After the younger vassals had performed, the Daimio gave an order that Harada Kurando and Hira Gundayu should have a match. To the winner, he said, he would present a gold image of the Goddess of Kwannon.

Both men fenced their best. There was great excitement. Gundayu had never done so well before; but Harada was too good. He won the match, receiving the gold image of Kwannon from the hands of the Daimio amid loud cheering.

Gundayu left the scene of the encounter, boiling over with jealousy and vowing vengeance. Four of his most faithful companions left with him, and said they would help him to waylay and assault Harada that very evening. Having arranged this cowardly plan, they proceeded to hide on the road which Harada must traverse on his return home.

For three hours they lay there with evil intentions. At last in the moonlight they saw Harada come staggering along, for, as was natural on such an occasion, he had, with friends, been indulging in sake freely.

Gundayu and his four companions sprang out at him, Gundayu shouting, 'Now you will have to fight me to the death.'

Harada tried to draw his sword, but was slow, his head whirling. Gundayu did not wait, but cut him to the ground, killing him. The five villains then hunted through his clothes, found the golden image of Kwannon, and ran off, never again to appear on the domains of the Lord of Tsugaru.

When the body of Harada was found there was great grief.

Yonosuke, Harada's son, a boy of sixteen, vowed to avenge his father's death, and obtained from the Daimio special permission to kill Gundayu as and when he chose; the disappearance of Gundayu was sufficient evidence that he had been the murderer.

Yonosuke set out that day on his hunt for Gundayu. He wandered about the country for five long years without getting the slightest clue; but at the end of that time, by the guidance of Buddha, he located his enemy at Gifu, where he was acting as fencing-master to the feudal lord of that place.

Yonosuke found that it would be difficult to get at Gundayu in an ordinary way, for he hardly ever left the castle. He decided, therefore, to change his name to that of Ippai, and to apply for a place in Gundayu's house as a chugen (a samurai's private attendant).

In this Ippai (as we shall now call him) was particularly lucky, for, as Gundayu was in want of such an attendant, he got the place.

On the 24th of June a great celebration was held at the house of Gundayu, it being the fifth anniversary of his service to the clan. He put his stolen golden image of Kwannon on the tokonoma (the part of a Japanese room, raised five inches above the floor, where pictures and flowers are placed), and a dinner, with sake, was set before it. A dinner was given by Gundayu to his friends, all of whom drank so deeply that they fell asleep.

Next day the image of Kwannon had disappeared. It was not to be found. A few days later Ippai became ill, and, owing to poverty, was unable to buy proper medicine; he went from bad to worse. His fellow-servants were kind to him; but they could do nothing that improved his condition. Ippai did not seem to care; he lay in his bed and seemed almost pleased to be getting weaker and weaker. All he asked was that a branch of his favourite omoto (rhodea japonica) should be kept in a vase before his bed, so that he might see it continually; and this simple request was naturally complied with.

In the autumn Ippai passed quietly away and was buried. After the funeral, when the servants were cleaning out the room in which he had died, it was noticed with astonishment that a small white snake was curled round the vase containing the omoto. They tried to remove it; but it coiled itself tighter. At last they threw the vase into the pond, not caring to have such a thing about them.

To their astonishment, the water had no effect on the snake, which continued to cling to the vase. Feeling that there was something uncanny about the snake, they wanted to get it farther away. So they cast a net, brought the vase and snake to shore again, and threw them into a stream. Even that made but little difference, the snake slightly changing its position so as to keep the branch of omoto from falling out of the vase.

By this time there was consternation among the servants, and the news spread to the different houses within the castle gates. Some samurai came down to the stream to see, and found the white snake still firmly coiled about the vase and branch. One of the samurai drew his sword and made a slash at the snake, which let go and escaped; but the vase was broken, and, to the alarm of all, the image of the Kwannon fell out into the stream, together with a stamped permit from the Feudal Lord of Tsugaru to kill a certain man, whose name was left blank.

The samurai who had broken the vase and found the lost treasure seemed particularly pleased, and hastened to tell Gundayu the good news; but, instead of being pleased, that person showed signs of fear. He became deadly pale when he heard the story of the death of Ippai and of the extraordinary appearance of the mysterious white snake. He trembled. He realised that Ippai was no less a person than Yonosuke, son of Harada, whose appearance after the murder he had always feared.

True to the spirit of a samurai, however, Gundayu 'pulled himself together,' and professed great pleasure to the person who had brought the image of Kwannon. Moreover, to celebrate the occasion, he gave a great feast that evening. Curiously enough, the samurai who had broken the vase and recovered the image became suddenly ill, and was unable to attend.

After he had dismissed his guests, at about 10 P.M., Gundayu retired to his bed. In the middle of the night he awoke with what he took to be a terrible nightmare. There was a choking sensation at his throat; he squirmed and twisted; gurgling noises proceeded from his mouth to such an extent that he aroused his wife, who in terror struck a light. She saw a white snake coiled tightly round her husband's throat; his face was purple, and his eyeballs stood out two inches from his face.

She called for help; but it was too late. As the young samurai came rushing in, their fencing-master was black in the face and dead.

Next day there was a close investigation. Messengers were despatched to the Lord of Tsugaru to inquire as to the history of the murdered Harada Kurando, father of Yonosuke, or 'Ippai,' and as to that of Gundayu, who had been in his employ for five years. Having ascertained the truth, the Lord of Gifu, moved by the zeal of Yonosuke in discharging his filial duties, returned the golden image of Kwannon to the bereaved family of Harada; and in commemoration he worshipped the dead snake at a shrine erected at the foot of Kodayama Mountain. The spirit is still known as Hakuja no Myojin, The White Serpent God.