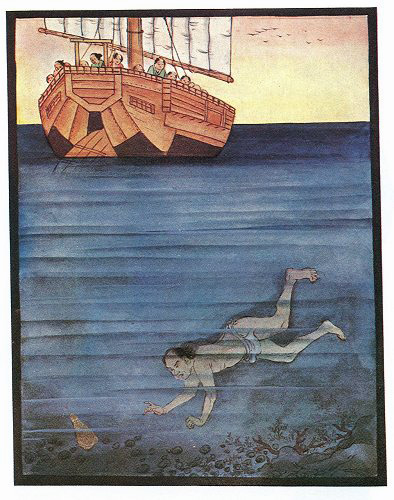 IN the period of Gen-roku, which lasted from 1688 to 1704, when the Shogun or military ruler Tsunayoshi's power was in full sway, he presented a solid gold figure of Kwannon, the Goddess of Mercy, to each of the three leading families of the provinces of Kii, Mito, and Owari, and they were considered as of the highest and greatest value by each of these leading Lords or Daimios, who had them kept in their inner palaces, so that they were almost impossible to get at, and were considered at least absolutely safe from robbers; but even in spite of this the Lord of Kii took additional precautions by always having a man night and day to guard his idol.

At the same period lived a most redoubtable robber whose name was Yayegumo. He was more than an ordinary robber, and was what the people called a 'fuin-kiri,' which means 'seal breaker' or 'seal cutter'; a first-class burglar, in fact, who never descended to robbing the poor, but only robbed the richest and most difficult palaces and castles that were to be got at, taking from them only the highest and most valuable treasures they possessed.

This bold robber broke into the Lord of Kii's Palace--no one knew how--took the idol of Kwannon, and left his name written on a piece of paper. The Lord of Kii, very angry, sent for the guard, whose name was Mumashima Iganosuke, and reprimanded him severely, asking him what excuse he had to make. 'None, my lord: tiredness overcame me and I slept. There is but one way in which I can show my regret, and that I will do by destroying myself.'

The Lord of Kii, who was a man of wisdom, answered that before he did this it would be more useful if Iganosuke would follow up the robber and try to recover the idol. Iganosuke, who had always been a faithful servant, readily consented, and, having obtained indefinite leave, went away. For fully four months he was quite unsuccessful, though he had travelled half over the country. At last he heard reports of robberies in Chugoku, and then later in Shikoku Province. Hurrying down from Izumo to Okayama, he there got on board a ship bound across the Inland Sea for Takamatsu, in Shikoku. The weather was fine and the sea smooth, and Iganosuke was in high spirits, for he had heard that one or two of the robberies had undoubtedly been done by Yayegumo, and he felt that at last he must be getting nearer the man he wished to catch--perhaps, even, he was on that very boat! Who could tell? Thinking of these possibilities, Iganosuke kept very much to himself, watching the people, whose spirits all seemed to be affected by the beautiful weather, for, though mostly strangers, they were all sociable.

Among them was a good-looking young samurai who had attracted Iganosuke by his refined appearance, as also by a beautiful gold pipe which he drew out from its case and smoked while chatting to his neighbour. By and by a samurai of some sixty years of age came up to the young man, and said:

'Sir, I have lost my pipe and tobacco-pouch somewhere on this ship. I am a confirmed smoker, and almost dying for a whiff of tobacco. Might I borrow yours for a moment or two?'

The young samurai handed both his pipe and his pouch to the old man with a bow, saying that this afforded him great pleasure.

The old samurai, after his three puffs of the pipe, was about to empty out the ash and refill it. To do so, without thinking what he was about, he knocked the pipe on the outside of the ship. To his horror the gankubi (the bowl) dropped off into the sea. The old man knew that the pipe was gold and of great value, and was utterly confused. He did not know what to say. His apologies were profuse; but they did not bring back the end of the pipe. The young samurai, of course, was much annoyed; but it would be no use getting angry. In any case that would have been an excessively vulgar proceeding, more especially with so old a man. He said:

'Ah! the pipe was given to me by the lord of my clan for meritorious service rendered in the big hunt last year, and truly I do not know how I shall be able to face the disgrace of incurring his anger.' He grew pale as he mused.

The old samurai felt more sorry than ever when he heard this, and said:

'There is only one way I see that you can face your lord, and that is by my death. I also was a samurai of some importance when younger, and know how to conduct myself. It is right that I should disembowel myself as an apology to you for my carelessness.' And, saying this, the old samurai drew his right arm and shoulder from under his kimono.

Surprised at the old man's high sense of honour, the young samurai seized the hand in which he held his sword and prevented him, saying:

'That will really do no good. It would not make it easier for me to explain to my lord. Your death can bring no apology to him. It was I to whom he gave the pipe, and it is I who have lost it by lending it to you. It is I, therefore, who should offer the apology to my lord by doing harakiri!' Then the young samurai prepared to kill himself.

Iganosuke, who had been watching the incident, stepped forward and said:

'Gentlemen, I also am a samurai, and I have heard what you say. Let me say that, though the pipe-end has fallen into the sea, it in no way follows that it is lost beyond recovery. Both of you appear to me to be unnecessarily hasty. I am a good diver and swimmer; our ship is becalmed; and the water hereabouts is not very deep. I am quite ready to try and help you to recover the pipe if you will allow me.'

Of course, both the other samurai were pleased at this idea, of which, being no swimmers themselves, they had never thought, And Iganosuke. lost no time in throwing off his kimono and diving into the sea, where he was thoroughly at home, having been in his younger days so expert a swimmer that he gave lessons to many of the samurai at Kii.

Down he went to the bottom, finding not much more than seven Japanese fathoms of five feet each. The bottom was composed almost entirely of stones and was very clear. Iganosuke had not moved many feet along before he saw the end of the gold pipe, and at the same time something else gleaming between the stones. Thrusting the pipe between his teeth, he seized the other object, and to his great astonishment found it to be no less a thing than the gold figure of Kwannon which had been stolen from the castle of the Lord of Kii.

Carefully returning to the surface, Iganosuke scrambled on board, and handed the pipe-end to the grateful young samurai, who, with the old one, bowed to the ground.

When Iganosuke had thrown on his clothes, he said:

'I am a retainer of the Lord of Kii, and I have come from our castle of Takegaki to hunt for the robber who stole the very figure of Kwannon which I have just by good fortune while looking for your pipe recovered. Is it not wonderful? Truly the old saying, "Nasakewa hito no tame naradzu" [148:1] is quite true!'

Then the old man, in a wild state of delight, cried: 'Even more curious is this. My name is Matsure Fujiye of Takamatsu. Only a month ago the robber whom you name Yayegumo Fuin-kiri, the seal-breaker, came into the bedroom of my lord, and was about to steal great valuables, when I, who was on guard, tried to take him. Though an old man, I am a fencer; but he was too clever for me and escaped. I followed him down to the beach, but was not fast enough, and he got away. Since then I have always wondered what he had in his kimono pockets, for the bright rays of some gilded thing shot out of them. The robber had not got far from the shore before a great storm arose. He was wrecked and drowned. Both his body and the boat were recovered some days later, and I identified them; but there was nothing in his pocket. It is clear that when his boat upset the robber lost the Kwannon, which must have been what I saw shining out of his pocket.'

Truly this was a wonderful string of coincidences!

Iganosuke, who had no further cause to travel, returned to the Lord of Kii, and reported his adventures and good fortune. So much pleased was the Daimio, he gave Iganosuke a present.

The figure of the gold Kwannon was better guarded than ever before. Undoubtedly it had miraculous power, and it may still be among the treasures of Kii.

We have 918 guests and no members online