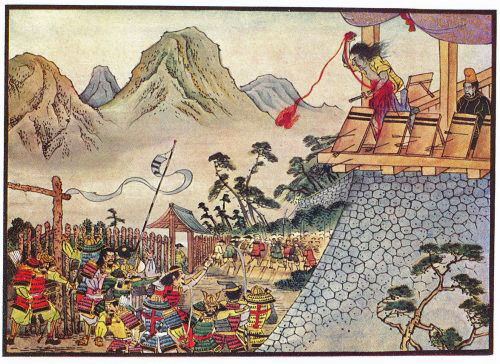 MURAKAMI YOSHITERU--We shall call him Yoshiteru for short--was one of the faithful retainers of Prince Morinaga, third son of the Emperor Godaigo, who reigned from 1319 to 1339. When I say 'reigned,' I mean that Godaigo was Emperor; but there was a Regent at the time, Hojo Takatoki, who ruled with harshness and great selfishness.

With the exception of young Prince Morinaga, the Imperial family appeared to take things easily. They preferred quietude and comfort to turbulence and quarrelling. Prince Morinaga was different. Fiery-tempered and proud, he thought that Hojo Takatoki was usurping the Emperor's rights. The man, he said, was nothing more by birth than one of the Emperor's subjects, and had no business to be made Regent.

Naturally these opinions led to trouble, and it was not very long before Prince Morinaga was obliged to leave the capital suddenly, with his followers, of whom there were some hundreds, not enough to fight Hojo Takatoki at the time.

Prince Morinaga had made up his mind that it would be better to live independently in Yamato than to be under the sway of Hojo Takatoki, as were his father and his elder brothers. Having collected the most faithful of his followers--of whom the most notable was the hero of our story, Murakami Yoshiteru,--the Prince left the capital in disguise, and started for Yoshino in Yamato. There, in the wild mountains, he intended to build a castle, in which to dwell for the rest of his days independent of the Regent, whom he held in much loathing.

Prince Morinaga carried with him an Imperial flag, which, he expected, would gain for him sympathy and help even in the wild Yamato Province. Though from Kioto the then capital to the borders of Yamato is, in a direct line, only about thirty miles, the whole country is mountainous and wild; roads are non-existent, mountain paths taking their place. Consequently, it was noon on the fifth day before the Prince found himself at a little border village called Imogase. Here he found his way blocked as it were by a guard-house, the soldiery of which had been chosen from among Imogase villagers, headed by one Shoji, a rough and disagreeable man.

When Prince Morinaga and his party of about eighty followers dressed as yamabushi (fighting monks) arrived, flying the standard, they were called to a halt by the village guard, and told that they could go no farther into Yamato without leaving one of themselves as hostage. The Prince was too haughty to speak to the villagers and explain, and, unfortunately, Murakami Yoshiteru, his most trusted leader, could not be found, for he had remained some miles behind to gather straw and make a new pair of waraji (straw shoes). Shoji, leader of the Imogase villagers, was firm in his demand that one of the party should be left behind until their return. For some twenty minutes matters stood thus. Neither side wanted to fight. At last Shoji said:

'Well, you may say that you are a prince! I am a simple villager, and I don't know. You may carry the Imperial flag; but when you are dressed like yamabushi it does not look exactly as if you were a prince. As I don't want trouble, and you want to pass without trouble, -my orders being that out of all parties of over ten armed people I am to hold one as a hostage,--the only suggestion that I can make is that I keep as hostage this Imperial flag.'

The prince, glad enough to save leaving one of his faithful followers, gave the standard to Shoji as hostage, and then he and his party were allowed to pass into Yamato. They proceeded on their way. Not half-an-hour after they had passed, Murakami Yoshiteru arrived at the guard-house, having made himself a pair of straw shoes, to take the place of his old ones; and his surprise at seeing his master's flag in such low hands was equalled by his anger.

'What is the meaning of this?' he asked.

Shoji explained what had happened.

On hearing the story Murakami lost control of his temper. He flew into a violent passion. He reviled Shoji and his men as a set of low blackguards who scarcely had a right to look at the Imperial standard of Japan, much less to dare to touch it; and with that he began a general assault on the village guard, killing three or four and putting the rest to flight. Murakami then seized the standard, and ran on with it until, towards evening, he came up with the Prince and his party, who were overjoyed at what he had done and at the recovery of the flag.

Two days later the party reached Yoshino, and in the vicinity of this place they built a fortress, where for some months they dwelt in peace. It was not long, however, before the Regent heard of the prince's whereabouts, and he soon sent a small army after him. For two days the fort was desperately attacked; on the third the outer gates were taken; two-thirds of the prince's men were dead'. Murakami, had been wounded three times, and his life could not last long. Faithful to the end, he rushed to his prince, saying, 'Master, I am wounded unto death. In less than half-an-hour our enemies will have conquered us, for we have but few men left. Your Highness is unwounded, and can in disguise escape when the end comes. Give me quick your armour, and let me pretend that I am your Highness. I will show our enemies how a prince can die.'

Changing clothes hastily, and donning the prince's armour, Murakami, bleeding badly from his wounds, and already more dead than alive with weakness from the loss of blood, regained the wall, and struggling up the last steps he reached a point where he could see and be seen by the whole of the enemy.

'I am Prince Morinaga!' shouted he. 'Fate is against me, though I am in the right. Sooner or later Heaven's punishment will come down on you. Until then my curses upon you, and take a lesson as to how a prince can die, emulating it, if you dare, when your time comes!'

With this Murakami Yoshiteru drew his short sword across his abdomen, and, seizing his quivering entrails, he flung them into the midst of his enemies, his dead body falling directly afterwards.

His head was taken to the Regent in Kioto as the head of Prince Morinaga, who escaped to plot in the future.

We have 1511 guests and no members online