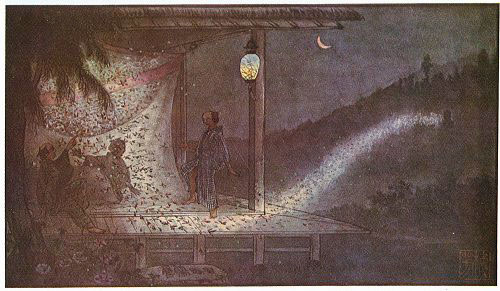 IN Funakami mura, Omi Province, lived an old farmer called Kanshiro. The like of him for honesty, charity, and piety had never been known--no, not even among the priesthood. Annually Kanshiro made pilgrimages to various parts of the country to say his prayers and do his duty towards the various deities, never thinking of his old age or of his infirmities. He was not strong, and suffered almost always from dysentery during the hot weather; consequently, he usually made his pilgrimages in cooler times.

In the eighth year of Kwansei, however, Kanshiro felt that he could not live another year, and, feeling that he should not like to miss making another pilgrimage to the great shrines at Ise, he resolved to take all risks and go in August, the hottest month.

The people in Funakami village subscribed one hundred yen for the venerable man, so that he might have the honour and credit of presenting a decent sum to the great shrines.

On a certain day, therefore, Kanshiro started alone, with the money hung in a bag about his neck. He had walked from sunrise to sunset for two days, when on the third in great heat he arrived at the village of Myojo, feeling nearly dead with weakness, for he had another attack of his old complaint.

Kanshiro felt that he could not continue his journey while this lasted, especially as he considered himself in an unclean condition, unfit to carry the holy money which had been entrusted to him by his friends in Funakami. He went, accordingly, to the cheapest inn he could find, and confided both his story and the hundred yen to the landlord, saying:

'Sir, I am an old man, sick with dysentery. If you will take care of me for a day or two I shall be better. Keep also until I am well this sacred money, for it would not do for me to defile it by carrying it with me while I am unwell.'

Jimpachi, the innkeeper, bowed, and gave every assurance that Kanshiro's wish should be followed.

'Fear nothing,' said he: 'I will place the money in its bag in a safe place, and myself attend upon you until you are well, for such good men as you are rare.'

For five days the poor old man was very sick indeed; but with his indomitable pluck he recovered, and on the sixth day decided to start again.

It was a fine day. Kanshiro paid his bill, thanked the landlord for his kindness, and was handed over his moneybag at the door. He did not look into the bag, because there were many coolies and pilgrims about. He did not wish these strangers to see that he carried much money. Instead of hanging it about his neck, as he had done before, he put the bag into his sack of clothing and food, and started off.

Towards midday Kanshiro stopped to rest and eat his cold rice under a pine tree. On examining his bag he found the hundred yen gone, and stones of the same weight placed in it instead. The poor man was greatly disconcerted. He did not even wait to eat his rice, but started back to the inn, which he reached at dusk. He explained as best he could the facts to Jimpachi, the innkeeper.

At first this worthy listened to the story with some sympathy; but when Kanshiro begged him to return the money he flew into a rage.

'You old rascal!' said he. 'A nice story you are telling to try and blackmail me! I'll give you a lesson that you will not forget.' And with that he struck the old man a severe blow on the chest, and then, seizing a stick, beat him unmercifully; the coolies joined in and thrashed him until he was nearly dead.

Poor old fellow! What could he do? Alone as he was, he crawled away half-dead; but he got to the sacred Ise shrines three days later, and after saying his prayers started back to Funakami. Here he arrived seriously ill. On telling his story, some believed him; but others did not. So overcome with grief was he, he sold his small property to refund the money, and with the rest he continued his pilgrimages to various temples and shrines. At last all his money was gone; but even then he continued his pilgrimages, begging food as he went.

Three years later he again visited Myojo village on his way to Ise, and here he learned that his enemy had since made a good deal of money, and now lived in quite a good house. Kanshiro went and found him, and said: 'Three years ago you stole the money entrusted to me. I sold my property to refund the people what they had given me to take to Ise. I have been a beggar and a wanderer ever since. Think not that I shall not be avenged. I shall be. You are young; I am old. Vengeance will overtake you soon.'

Jimpachi still protested innocence and began to get angry, saying:

'You disreputable old blackguard, if you want a meal of rice say so; but do not dare to threaten me.'

At this moment the watchman on his rounds took Kanshiro for a real beggar, and, seizing him by the arm, dragged him to the end of the village, and ordered him not to re-enter it, on pain of arrest; and there the poor old man died of anger and weakness.

The good priest of the neighbouring temple took the body, and buried it with respect, saying prayers.

Jimpachi in the meantime, afflicted with a guilty conscience, became sick, until after a few days he was unable to leave his bed. After he had lost all power of movement a curious thing occurred. Thousands and thousands of fireflies came out of Kanshiro's tomb and flew to the bedroom of Jimpachi. They surrounded his mosquito-curtain and tried to force their way in. The top of the curtain was pressed down with them; the air was foul with them; the glimmer dazzled the sick man's eyes. No rest was possible.

The villagers came in to try and kill them; but they could make no impression, for the string of flies from Kanshiro's tomb continued as fast as others were killed. The fireflies went nowhere else than to Jimpachi's room, and there they only surrounded his bed.

One or two villagers, seeing this, said:

'It must be true that Jimpachi stole the money from the old man, and that this is his spirit's revenge.'

Then everyone feared to kill the flies. Thicker and thicker they grew until they did at last make a hole in the mosquito-net, and then they settled all over Jimpachi. They got in his mouth, his nose, his ears, and his eyes. He kicked and screamed and lived thus in agony for twenty days, and after his death the flies disappeared completely.