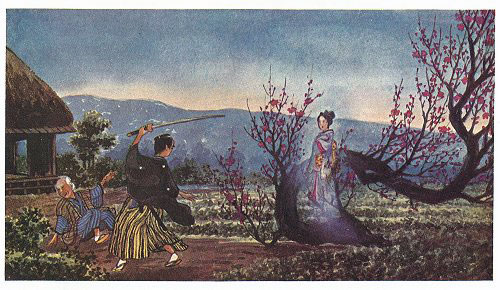 IN the year 1716 of the Kyoho Era--191 years ago--there lived at Momoyama Fushimi, an old gardener, Hambei, who was loved and respected for his kindliness of nature and his great honesty. Though a poor man, Hambei had saved enough to live on; and he had inherited a house and garden from his father. Consequently, he was happy. His favourite pastime was tending the garden and an extraordinarily fine plum tree known in Japan as of the furyo kind (which means 'lying dragon'). Such trees are of great value, and much sought after for the arrangement of gardens. Curiously enough, though one may see many beautiful ones, trees growing on mountains or on wild islands, they are very rarely touched except near the larger commercial centres. Indeed, the Japanese have almost a veneration for some of these fantastic furyo-shaped trees, and leave them alone, whether they be pines or plums.

The tree in question Hambei loved so much that no offer people could make would induce him to part with it. So notoriously beautiful were the tints and curves of this old stunted tree, large sums had many times been offered for it. Hambei loved it not only for its beauty but also because it had belonged to his father and grandfather. Now in his old age, with his wife in her dotage and his children gone, it was his chief companion. In the autumn he tended it in its untidiness of dead and dying leaves. He felt sorry and sympathetic for it in its cold and bare state in November and December; but in January he was happily employed in watching the buds which would blossom in February. When they did bloom it was his custom to let the people come at certain hours daily to see the tree and listen to stories of historical facts, and also to stories of romance, regarding the plum tree, of which the Japanese mind is ever full. When this again was over Hambei pruned and tied the tree. In the hot season he lingered under it smoking his pipe, and was often rewarded for his care by two or three dozen delicious plums, which he valued and loved as much almost as if they had been his own offspring.

Thus, year after year, the tree had become so much Hambei's companion that a king's ransom would not have bought it from him.

Alas! no man is destined to be let alone in this world. Some one is sure, sooner or later, to covet his property. It came to pass that a high official at the Emperor's court heard of Hambei's furyo tree and wanted it for his own garden. This dainagon sent his steward, Kotaro Naruse, to see Hambei with a view to purchase, never for a moment doubting that the old gardener would readily sell if the sum offered were sufficient.

Kotaro Naruse arrived at Momoyama Fushimi, and was received with due ceremony. After drinking a cup of tea, he announced that he had been sent to inspect and make arrangements to take the furyo plum tree for the dainagon.

Hambei was perplexed. What excuse for refusal should he make to so high a personage? He made a fumbling and rather stupid remark, of which the clever steward soon took advantage.

'On no account,' said Hambei, 'can I sell the old tree. I have refused many offers for it already.'

'I never said that I was sent to buy the tree for money,' said Kotaro. 'I said that I had come to make arrangements by which the dainagon could have it conveyed carefully to his palace, where he proposes to welcome it with ceremony and treat it with the greatest kindness. It is like taking a bride to the palace for the dainagon. Oh, what an honour for the plum tree, to be united by marriage with one of such illustrious lineage! You should indeed be proud of such a union for your tree! Please be counseled by me and grant the dainagon's wish!'

What was Hambei now to say? Such a lowly-born person, asked by a gallant samurai to grant a favour to no less a person than the dainagon!

'Sir,' he answered, 'your request in behalf of the dainagon has been so courteously made that I am completely prevented from refusing. You must, however, tell the dainagon that the tree is a present, for I cannot sell it.'

Kotaro was greatly pleased with the success of his maneuvers, and, drawing from his clothes a bag, said:

‘Please, as is customary on making a gift, accept this small one in return.'

To the gardener's great astonishment, the bag contained gold. He returned it to Kotaro, saying that it was impossible to accept the gift; but on again being pressed by the smooth-tongued samurai he retracted.

That evening he could not sleep. Towards midnight his wife rushed into his room, and, pulling him by the sleeve, shouted:

'You wicked old man! You villainous old rascal! At your age too! Where did you get that girl? I have caught you! Don't tell me lies! You are going to beat me now--I see by your eyes. I am not surprised if you avenge yourself in this way--you must feel an old fool!'

Hambei thought his wife had gone off her head for good this time. He had seen no girl.

'Don't tell me lies! I saw her! I saw her myself when I went down to get a cup of water!'

'Saw, saw--what do you mean?' said Hambei. 'I think you have gone mad, talking of seeing girls!'

'I did see her! I saw her weeping outside the door. And a beautiful girl she was, you old sinner,--only seventeen or eighteen years of age.'

Hambei got out of bed, to see for himself whether his wife had spoken the truth or had gone truly mad.

On reaching the door he heard sobbing, and, on opening, beheld a beautiful girl.

'Who are you, and why here?' asked Hambei.

'I am the Spirit of the Plum Tree, which for so many years you have tended and loved, as did, your father before you. I have heard--and grieve greatly at it--that an arrangement has been made whereby I am to be removed to the dainagon's gardens. It may seem good fortune to belong to a noble family, and an honour to be taken into it. I cannot complain; yet I grieve at being moved from where I have been so long, and from you, who have so carefully tended to my wants. Can you not let me remain here a little longer--as long as I live? I pray you, do!'

'I have made a promise to send you off on Saturday to the dainagon in Kyoto; but I cannot refuse your plea, for I love to have you here. Be easy in your mind, and I will see what can be done,' said Hambei.

The spirit dried its tears, smiled at Hambei, and disappeared as it were into the stem of the tree, while Hambei's wife stood looking on in wonder, not at all reassured that there was not some trick on her husband's part.

At last the fatal Saturday on which the tree was to be removed arrived, and Kotaro came with many men and a cart. Hambei told him what had happened--of the tree's spirit and of what it had implored of him.

'Here! take the money, please,' said the old man. Tell the story to the dainagon as I tell it to you, and surely he will have mercy.'

Kotaro was angry, and said:

'How has this change come about? Have you been drinking too much sake, or are you trying to fool me? You must be careful, I warn you; else you shall find yourself headless. Even supposing the spirit of the tree did appear to you in the form of a girl, did it say that it would be sorry to leave your poor garden for a place of honour in that of the dainagon? You are a fool, and an insulting fool--how dare you return the dainagon's present? How could I explain such an insult to him, and what would he think of me? As you are not keeping your word, I will take the tree by force, or kill you in place of it.'

Kotaro was greatly enraged. He kicked Hambei down the steps, and, drawing his sword, was about to cut off his head, when suddenly there was a little puff of wind scented with plum blossom, and then there stood in front of Kotaro the beautiful girl, the Spirit of the Plum Tree!

'Get out of my way, or you will get hurt,' shouted Kotaro.

'No: I will not go away. You had better kill me, the spirit that has brought such trouble, instead of killing a poor innocent old man,' said the spirit.

'I don't believe in the spirits of plum trees,' said Kotaro. 'That you are a spirit is evident; but you are only that of an old fox. So I will comply with your request, and at all events kill you first.'

No sooner had he said this than he made a cut with his sword, and he distinctly felt that he cut through a body. The girl disappeared, and all that fell was a branch of the plum tree and most of the flowers that were blooming.

Kotaro now realized that what the gardener had told him was true, and made apologies accordingly.

'I will carry this branch to the dainagon,' said he, 'and see if he will listen to the story.'

Thus was Hambei's life saved by the spirit of the tree.

The dainagon heard the story, and was so moved that he sent the old gardener a kind message, and told him to keep the tree and the money, as an expression of his sorrow for the trouble which he had brought about.

Alas, however, the tree withered and died soon after Kotaro's cruel blow and in spite of Hambei's care. The dead stump was venerated for many years.

We have 896 guests and no members online