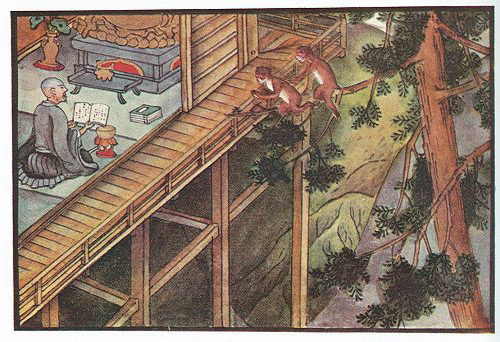 IN the far-north and mountainous portion of Echigo Province is a temple which during the reign of the Emperor Ichijo had a curious story attached to it; and, though the Emperor Ichijo reigned so long ago as between the years 987 and 1011 A. D., the teller of the story assured me that he believed the temple to be in existence still.

The temple's name is Kinoto, and it is situated in the hills in wild woods, which in those days must have been almost virgin forest.

The monk who reigned supreme over the Kinoto Temple was a youngish man, but very devout; he read sacred sermons from the holy Buddhist Bible, aloud, twice a-day.

One day the good youth perceived that two monkeys had come down from the mountain and sat listening to his reading with serious faces and no tricks. He was amused, and, taking no notice, continued to read. As soon as he had finished, the monkeys went off into the hills.

The monk was surprised to see the monkeys appear at both his sermons next day; and when on the third day they came again he could not help asking why they came so regularly.

'We have come, holy father, because we like to hear the words and sermons of Buddha as read by yourself, and greatly do we desire to retain all the wisdom and virtues which we have heard you recite. Is it possible for you to copy out the great and holy Buddhist book?'

'It would be a very laborious affair,' answered the priest, highly astonished; 'but, so rare an interest is it that you animals take in the sermons of our Great Lord Buddha, I will make an effort to satisfy your wish, hoping that thereby you may be benefited.'

The monkeys bowed and left the priest, pleased with themselves and the promise they had obtained, while the priest set to at his gigantic labours of copying the Buddhist Bible. Some six or seven days later about five hundred monkeys came to the temple, each bearing parchment paper, which they laid before the priest, their foreman saying how deeply grateful they would be when they had got the copy of the Bible, so that they might know the laws and mend their ways; and, bowing again before the priest, they retired, all except the first two monkeys. These two set diligently to work to find food for the priest while he wrote. Day after day they went into the mountains, returning with wild fruits and potatoes, honey and mushrooms; and the priest wrote steadily on, being thus attended, until he had copied five volumes of the sacred book. 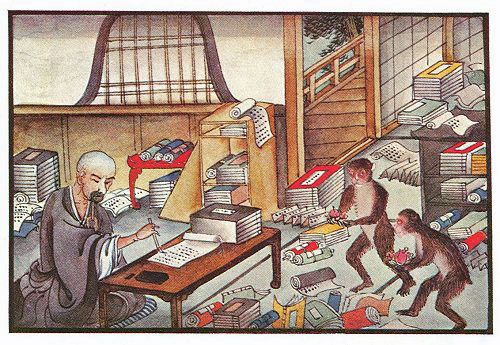 When he had reached the end of the fifth volume the monkeys, for some unaccountable reason, failed to come, and the good priest was quite nervous on their account. The second day of their absence he went in search of them, fearing that they must have been overcome by some misfortune. Everywhere the priest found traces of their forages in his behalf,--branches broken off the wild fruit trees, scratchings and holes where they had been looking for wild potatoes. Evidently the monkeys had worked hard, and the poor priest felt deeply anxious on their account.

At last, when near the top of the mountain, his heart gave a bound and was filled with sorrow when he came to a hole which the monkeys had made in looking for wild potatoes--so deep that they had been unable to get out. No doubt both of them had died of broken hearts, fearing that the priest would think they had deserted him.

There remained nothing to do but to bury the monkeys and pray for their blessing; which he did. Shortly after this the priest was called away from the temple to another: so, as he saw no necessity to continue copying the Buddhist Bible, he put the five volumes he had copied into one of the pillars of the temple, which had a sort of shelf cupboard cut in it.

Forty years later there arrived at the temple one Kinomi-ta-ka Ason, who had become Governor or Lord of Echigo Province. He came with half of his retainers and domestics, and asked the priests if they knew anything of the unfinished copy of the Buddhist Bible. Was it in the temple still?

'No,' they said, 'we were none of us here at the time your Lordship mentions. But there is one old man, a servant, who is eighty-five years of age, and he may be able to tell you something. We will send for him.'

Shortly afterwards a man with flowing white beard was ushered in.

'Is it the old document that a priest began copying out for the monkeys you want? Well, if so, that has never been touched since, and is a matter of so little importance that I had nearly forgotten about it. The document is in a little secret shelf which is hollowed out in one of the main pillars of the temple. I will fetch it.'

Some ten minutes later the documents were in the hands of Kinomi-ta-ka Ason, who was in ecstasy of delight at the sight of them. He told the priests and the old man that he was the Lord of Echigo Province, and that he had journeyed all the way to their temple to see if unfinished volumes of the Bible remained there.

'For,' he said, 'I was the senior of the two monkeys who were so anxious to obtain copies of the whole of our Lord Buddha's sermons; and, now that I have been born a man, I wish to complete them.'

Kinomi-ta-ka Ason was allowed to take the five volumes away with him, and for five years he kept copying out the sacred book. He copied three thousand volumes in all, and it is said that they are now kept in the Temple of Kinoto, in Echigo, as its most sacred treasure.

We have 789 guests and no members online