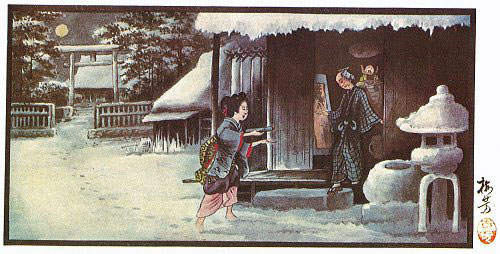 IN the compound or enclosure of the temple called Bukoji, at Takatsuji (high cross street), formerly called Yabugashita, which means 'under the bush,' in Kyoto, a curio-dealer had his little shop. His name was Kihachi.

Kihachi had not much to sell; but what little he had was usually good. Consequently, his was a place that the better people looked into when they came to pray--to see, if not to buy;--for they knew full well if there was a good thing to be bought, Kihachi bought it. It was a small and ancient kind of Christie's, in fact, except that things were not sold by auction. One day, the day on which this story starts, Kihachi was sitting in his shop ready either to gossip or to sell, when in walked a young knight or court noble--'Kuge,' the Japanese called him in those days; and very different was such an one from a knight of a feudal lord or of a Daimio, who was usually a blusterer. This particular knight had been to the temple to pray.

'You have many pretty and interesting things here,' said he. 'May I come in and look at them until this shower of rain has passed? My name is Sakata, and I belong to the court.'

'Come in, come in,' said Kihachi, 'by all means. Some of my things are pretty, and all are undoubtedly good; but the gentry part with little at present. One wants to live two lives of a hundred years each in my trade--one hundred of distress, revolution, and trouble, wherein one may collect the things cheap; and the next hundred of peace, wherein one may sell them and enjoy the proceeds. My business is rotten and unprofitable; yet, in spite of that, I love the things I buy, and often look at them long before I put them up for sale. Where, sir, are you bound for? I see that you are going to travel--by the clothes you wear and carry.'

'That's true,' answered Sakata: 'you are very shrewd. I am going to travel as far as Toba, in Yamato, to see my dearest friend, who has been taken suddenly and mysteriously ill. It is feared he may not live until I get there!'

'At Toba!' answered the old curio-dealer. 'Pardon me if I ask the name of your friend?'

'Then,' said the curio-dealer, 'he is the gentleman who is said to have killed the ghost or spirit of the old cherry tree near Toba, growing in the grounds of the temple in which he lives at present with the priests. The people say that this cherry tree is so old that the spirit left it. It appeared in the form of a beautiful woman, and Matsui, either fearing or not liking it, killed it, with the result, they say, that from that very evening, which was about ten days ago, your friend Matsui has been sick; and I may add that when the spirit was killed the tree withered and died.'

Sakata, thanking Kihachi for this information, went on his way, and eventually found his friend Matsui being carefully nursed by the priest of the Shonen Temple, Toba, with whom he was closely connected.

Soon after the young knight had left the old curio-dealer Kihachi in his shop it began to snow, and so it continued, and appeared likely to continue for some time. Kihachi, therefore, put up his shutters and retired to bed, as is often very sensibly done in Japan; and he no doubt retired with many old wood-carvings to rub and give an ancient appearance to during the period of darkness.

Not very late in the evening there was a knock at the shutters. Kihachi, not wishing to get out of his warm bed, shouted: 'Who are you? Come back in the morning. I do not feel well enough to get up to-night.'

'But you must--you must get up! I am sent to sell you a good kakemono,' [299:1] called the voice of a young girl, so sweetly and entreatingly that the old curio-dealer got up, and after much fumbling with his numbed fingers opened the door.

Snow had fallen thickly; but now it was clear moonlight, and Kihachi saw standing before him a beautiful girl of fifteen, barefooted, and holding in her hands a kakemono half-unfolded.

'See,' said she, 'I have been sent to sell you this!' She was the daughter of Matsui of Toba, she said.

The old man called her in, and saw that the picture was that of a beautiful woman, standing up. It was well done, and the old man took a fancy to it.

'I will give you one rio for it,' said he; and to his astonishment the young girl accepted his offer eagerly--so much so that he thought that perhaps she had stolen it. Being a curio-dealer, he said nothing on that point, but paid her the money. She ran away with haste.

'Yes: she has stolen it--stolen it, undoubtedly,' muttered the old man. 'But what am I supposed to know about that? The kakemono is worth fully 50 rio if it is worth a cent, and not often do such chances come to me.'

So delighted was Kihachi with his purchase, he lit his lamp, hung the picture in his kakemono corner, arid sat watching it. It was indeed a beautiful woman well painted, and worth more even than the so rio he at first thought. But, by all the saints, it seems to change! Yes: it is no longer a beautiful woman. The face has changed to that of a fearful and horrible figure. The face of the woman has become haggard. It is covered with blood. The eyes open and shut, and the mouth gasps. Kihachi feels blood dropping on his head; it comes from a wound in the woman's shoulder. To shut out so horrid a sight, he put his head under the bed-clothes and remained thus, sleeplessly, until dawn.

When he opened his eyes, the kakemono was the same as when he had bought it: a beautiful woman. He supposed that his delight in having made a good bargain must have made him dream so he thought nothing more about the horror.

Kihachi, however, was mistaken. The kakemono again kept him awake all night, showing the same bloody face, and occasionally even shrieking. Kihachi got no sleep, and perceived that instead of a cheap bargain he had got a very expensive one; for he felt that he must go to Toba and return it to Matsui, and he knew that he could claim no expenses.

After fully two days of travel, Kihachi reached the Shonen Temple, near Toba, where he asked to see Matsui. He was ushered ceremoniously into his room. The invalid was better; but on being handed the kakemono with the figure of a lady painted on it he turned pale, tore it to fragments, and threw it into the temple fire ('irori' [301:1]); after which he jumped in with his daughter himself, and both were burned to death.

Kihachi was sick for many days after this sight. The story soon spread over the whole surrounding country.

Prince Nijo, Governor of Kyoto, had a thorough inquiry made into the circumstances of the case; and it was found beyond doubt that the trouble to Matsui and his family came through his having killed the spirit of the old cherry tree. The spirit, to punish him and show that there was invisible life in old and dead things and often of the best, appeared to Matsui as a beautiful woman being killed; the spirit went into his beautiful picture and haunted him.

Prince Nijo had a fine young cherry tree planted on the spot of the old to commemorate the event, and it is called the 'Memorial Cherry Tree' to this day.

^301:1 The story says 'furnace'; but, unless cremation went on in those days, it must have been the 'irori' (open floor fire) or else (if a Shinto temple) an open-air bonfire, which is lit on certain days.