Ghost of the Violet Well 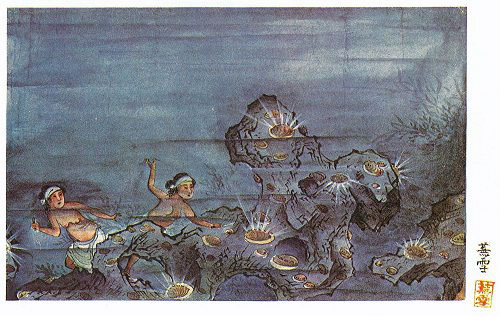 MANAZURU-MINATO is situated on a small promontory of the same name. It faces the Sagama Bay, famed for beauty; at its back are mountains rising gradually and overtopped in the distance by the majestic Fuji; to the north on clear days the sandy shores of Kozu and Oiso, twenty-five miles off, seem to be almost within arm's reach. Some people have compared the beauties of Manazuru-zaki from cape to river with the place in China called 'Sekiheki' by the celebrated poet of that country, Sotoba, who wrote 'Sekiheki no Fu,' the Ode to Sekiheki.

Many years ago Minamoto-no-Yoritomo, after his defeat at the battle of Ishibashiyama, fled to Manazuru-minato, and stayed there for a few days while waiting for favourable weather to cross to the opposite side, the province of Awa. One can still see, I am told, the cave in which he hid, which retains its old name, 'Shitoto-iwa.' The scenery on the coast is magnificent. The rocks rise sheer out of the sea and enclose a perfect little bay on the inside of Manazuru Zaki (Cape). There the fishermen erected a quiet little shrine, 'Kibune Jinja,' where they worshipped the goddess who guards the fishing of their coast. They had but little to complain of in the Bay of Manazuru. The waters were deep, and always well-stocked with fish such as tai; in due season came the sawara (giant mackerel) and all the smaller, migratory fishes, including the sardine and the anchovy. The fishermen had naught to complain of until about forty years ago, when a strange thing happened.

On the 24th of June, a person from some inland place arrived for a few days' sea-bathing. He was no swimmer, and he was drowned the first day. His body was never recovered, though the fishermen did all they could to find it. From this event onwards for a full two years the abundance of fish in the bay grew less and less, until it became difficult to catch enough to eat. The situation was serious in the extreme.

Some of the elder fishermen attributed the change to the stranger who had been drowned.

'It is his unrecovered body,' they said, 'that has made our sacred waters change. The uncleanness has offended Gu gun O Hime, our goddess. It will never do to go on as we are. We must hold a special festival at the temple of Kibune Jinja.'

Accordingly, the head priest, Iwata, was approached. He was pleased with the idea, and a certain day was fixed upon.

On the appointed evening hundreds of fishermen gathered together with torches in one hand and Shirayu or Gohei [342:1] papers fastened on a bamboo in the other. They formed into procession and advanced towards the shrine from various directions, beating gongs. At the temple the priest read from the sacred books, and prayed to the goddess that had watched over them and their fisheries not to desert them because their waters had been polluted by a dead body. They would search for it by every means in their power and cleanse the bay.

Suddenly, while the priest was praying, a light, the brilliance of which nearly blinded the fishermen, flashed out of the water. The priest stopped for a moment; a rumbling noise was heard at the bottom of the sea; and then there arose to the surface a goddess of surpassing beauty (probably Kwannon Gioran). She looked at the ceremony which was being held on shore for a full hour, and then disappeared with another flash, leaving the sound of roaring waves.

The priest and the elder fishermen considered matters, and came to the conclusion that what they had seen was indeed their goddess, and that she had been pleased at their ceremony. Also, they thought the dead body must still be at the bottom of the bay, directly under the spot whence the flashes of light and the goddess herself had appeared. It was arranged that two young virgins who could dive should be sent down at the spot to see, and two were accordingly chosen--Saotome and Tamajo. Wrapped in white skirts, these maidens were taken in a boat to where the flashes and the goddess had appeared. The girls dived, reached the bottom, and searched for the body of the man drowned two years before. Instead of finding it, they saw only a small but dazzling light. Curiosity led them to the spot, and there they found

hundreds upon hundreds of awabi (ear-shells) fastened upon a rock six feet in height and twenty-five or thirty in length. Whenever the fish moved they were obliged to raise their shells, and it was the glitter of the pearls inside that had attracted the damsels. This rock must have been the tomb of the drowned, or else the home of the goddess.

Saotome and Tamajo returned to the surface, each having taken from the rock a large shell to show the priest. As they came to the shore cheers were given in their honour, and the priest and the fishermen crowded round them.

On learning about the awabi shells, which they had never before heard of as being in the bay, they came to the conclusion that it was not uncleanness that kept the fish away. The lights thrown from the brilliant nacreous shells, and pearls inside them, must be the cause. Many times have we heard of the awabi flying. They must have flown here at some time within two years. The fishermen resolved to remove them. It was evident that the goddess had appeared in the light so as to show what it was that kept the fish away.

No time was lost. Many hundreds of men and women went down and cleared the place; and the fish began to. return to Manazuru-minato.

At the suggestion of the priest, Iwata, there is held on every 24th of June a matsuri (festival). The fishermen light torches and go to the shrine for worship all the night through. This is called the 'Awabi Festival' of Kibune.

NOTE.--The story was told to me by a man who knows nothing of shell-fish. He told the story as of the osari, a kind of cockle-shell dug out of the sand at low tide. It is impossible that this story could have referred to other shell-fish than haliotis (the ear-shell), or the awabi, or the regular pearl oyster.

Diving women have seen the 'flight' of haliotis and described it to me. If one feels disposed to leave a rock, they all feel the same impulse and go. Thus it is that large old haliotis sometimes appear on a rock some fifteen fathoms deep when not one was there the day before; and they go with equal quickness. For a thousand years or more the same rocks have been haunted. And divers keep their finds at the bottom of the sea a great secret--at least, so I observe at Toshi.

^342:1 Gohei papers are a Shinto emblem, representing gifts of cloth to the deity, usually the god Kami. Some say Gohei represent, in their curious cutting, the Kami beating dora, a gong used in worship.