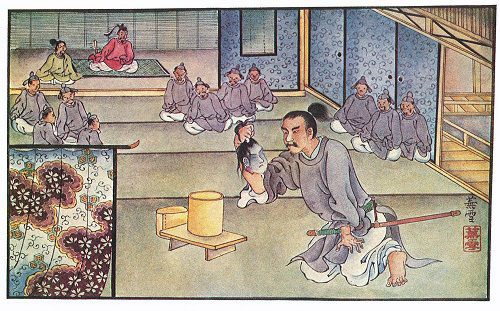 IN the reign of the Emperor Engi, which began in the year 901 A.D., there lived a man whose name has ever since been celebrated on account of his beautiful writings, poetic and other. He was the Emperor's great favourite, and consequently he was the strong man of the day; his name was Sugawara Michizane. Needless to say, it was not very long before, with all these things in his favour, he was the head of the Government, living in luxury.

Things went well enough for a time; but the inevitable came at last. Not all the people agreed with Michizane's ideas or his politics. Secret enemies lurked at every corner. Among them was one particularly bad man named Tokihira, whose poisonous intrigues at Court were constant.

Tokihira held a Government position under Michizane, and hated him in his heart, thinking that if he could but arrange to get Michizane into the bad graces of the Emperor he himself might become leader of the Government.

Michizane was a man with whom little fault could be found, and so it came to pass that Tokihira was unable to find any cause for starting evil reports about him; but as time went on he became more determined to do evil in the end.

At last an opportunity arrived. Tokihira, who had many secret agents trying to discover something to be reported to the Emperor against Michizane, heard a statement that Prince Toki (Toki no Miya) had fallen secretly in love with the beautiful daughter of Michizane, and that they held secret meetings.

Tokihira was overjoyed at the news, and went straightway to the Emperor, who received him, hearing that he had a marvelous tale of intrigue to tell.

Naturally the Emperor Engi was infuriated. He was a good and sound monarch, and had ruled the people, with the aid of Michizane, fairly, firmly, and well. He had looked upon Michizane as a personal friend; and to think of Michizane conspiring his assassination, or at all events so scheming as to place Prince Toki on the throne, and to marry his own daughter to the Prince, was more than he could stand.

Michizane protested his innocence. True it was, he said, that the Prince had fallen in love with his daughter; but that was not much to be wondered at. His daughter was beautiful; the Prince and she were much of the same age, and had seen much of each other from their childhood. Now that they had grown older, they found that their friendship had turned to love. That was all. It was not easy for a Prince of the blood royal to meet the lady of his heart quite so openly as another might; and, no doubt, they had met, for his daughter had told him so. As to the plot asserted by Tokihira, that was absolutely fanciful, and it was an astonishment to hear of so dastardly an accusation.

Tokihira perceived the temper of the Emperor. By loud words and unscrupulous lies he upset all the unfortunate Michizane's protests; and the Emperor ordered Michizane to be sent for the rest of his life to Tsukushi, in the island of Kyushu.

Accompanied only by his faithful servant Matsuo, Michizane went into exile. The punishment of Michizane, unjust as it was, broke up the employment of many others. All those who had been closely associated with him were dismissed. Among them was Takebayashi Genzo, who had been one of Michizane's chief attendants. Genzo had been one of Michizane's literary pupils; consequently it is not astonishing that on losing employment, Genzo fled to a small town, and out of duty took with him Michizane's wife and young son Kanshusai, aged ten. All changed their names, and Genzo, to support them as well as his own family, established a small school.

Thus it was that for some time Kanshusai escaped the wicked designs against his life that had been planned by Tokihira.

Matsuo, the faithful servant who had followed his master Michizane into banishment, heard of a vile plot to assassinate his master's son, and after many weary days of thought as to how he could prevent it he perceived that the only way would be to sacrifice his own son instead.

First he told his banished master of his intention, and having obtained leave he journeyed back to Kyoto, and sought out Tokihira himself, to whom he offered his services both as a servant and as a hunter of Michizane's son Kanshusai. Tokihira readily engaged him, thinking that now he would be sure to find the boy whom he wished to have beheaded. Tokihira had taken the place of Michizane in the Emperor's favour, and had great power; his will was almost law.

So well did Matsuo play his part in Tokihira's household and among his servants, it was not long before they were all agreed that Matsuo was most faithful to his new master, and the greatest confidence was placed in him.

Shortly after this, it came to the knowledge of Tokihira that Kanshusai was hidden, under a different name, in the school which belonged to Genzo. Genzo was ordered to send the boy's head to Tokihira within forty-eight hours.

Matsuo, ever faithful, hearing of this, went to Genzo's school in disguise and disclosed to the schoolmaster, who readily assented, his scheme for saving Kanshusai. Then Matsuo sent his son Kotaro to Genzo's school, from which he never returned alive, poor boy; and though (in all honour be it said) Genzo did not like the killing of this boy, he steeled his nerves, for the sake of his former master and to save Kanshusai's life.

With one blow of his sword he took off the innocent head.

At the appointed time Tokihira's officials called at the school to fetch it, and they carried it back to Tokihira, saying: 'Now, Lord Tokihira, there is no longer fear for the future from Michizane's son, for here is his head in this box. See! And here is the schoolmaster Takebayashi Genzo, who followed your lordship's orders and cut it off.'

Tokihira was pleased, but not perfectly assured that the head was the right one: so, knowing that Matsuo had previously been employed by Michizane, and that he must know if it were Kanshusai's head or not, he called him, ordering him to take the head out of the box and identify it.

Poor Matsuo! Imagine his feelings at having to draw his only son Kotaro's head from the box, and hold it up by the hair, and assure the Lord Tokihira that it was indeed the head of Kanshusai, Michizane's son! He did so, however, with great nerve and splendid fortitude, thus saving the life of Kanshusai, and fulfilling his duty to his banished master Michizane.

Matsuo's fidelity is still adored by those who know the story.

Not long after a terrible thunderstorm came over Kyoto. A thunderbolt crashed through Tokihira's palace and killed him. To this day people say that Michizane's spirit came down in the shape of that thunderbolt to be avenged.

^65:1 -A Faithful Servant - This little tragedy, showing the deep loyalty which was general 1000 years ago, was told to me by Mr. Matsuzaki of the Kencho (Government Office).