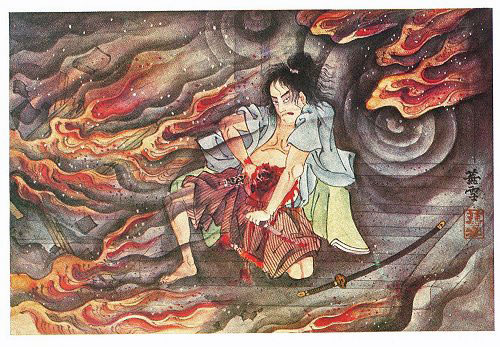 SEVERAL hundred years ago there dwelt in lands of the Hosokawas a widow and her daughter, a beautiful girl of seventeen, named Kazuye. O Kazuye San's father had been foully murdered some six months before, and both Kazuye and her mother had made up their minds to devote their fortune and their lives to bringing the criminals to justice. In these efforts they received no help, but spent the whole of their money, until at last they were almost forced to beg in the street for food. Day after day, however, they continued to pray in the temple for help, and never once lost heart or weakened in their purpose. O Kazuye told her mother that were she fortunate enough to gain the affections of a man, even he should be sacrificed in the effort after vengeance.

One day it came to pass that the poverty-stricken appearance of Kazuye and her mother, returning as usual from praying in the temple, aroused the mirth of a party of roughs, who proceeded to insult them. A handsome young samurai, Okawa Jomoyemon, happened to come along. Drawing his sword, he very soon put the roughs to flight. Having done this, and bowing low, he asked whom he had the honour of serving.

O Kazuye answered for her mother, and quickly recognized that this handsome youth was just such as she had longed to meet, so that he might fall in love and wish to help her in seeking out the murderer of her father. Therefore, not unnaturally, she encouraged him; and he fell in love with her. In the meanwhile an old friend of Kazuye's father, feeling great sorrow for her, had found a place for her in Prince Hosokawa's household; and there she won such favour in the eyes of the Prince (or, as the title then was, Daimio) that the other maids began to be jealous.

It happened that one evening Okawa, now desperately in love with O Kazuye, in spite of being the retainer of another Daimio, felt that he must see her at all costs. He arranged a secret meeting, and eventually found his way to Kazuye's apartment. Still full of desire for vengeance, she seized upon the occasion to pour forth her story and implore assistance.

Okawa, being a true knight-errant, vowed that he would speak no more of love until he himself had hunted down and killed the murderers of Kazuye's father. Just as he had finished making this vow, one of the jealous maids (who had been listening) made her presence known, and rushed off to tell her mistress.

What was to be done? Okawa, the retainer of another Daimio, caught in the castle secretly conversing with one of the Hosokawa maids of honour! Surely both he and she would suffer death! O Kazuye was not long in thinking. She hid her lover in an old armour-case. That, however, was no use. She was instantly summoned into the presence of the Daimio, and the armour-chest was carried in as well.

The Daimio, furiously angry, ordered that O Kazuye should be killed. Okawa spoke up. He said that she was in no way responsible for this secret meeting, that the fault was entirely his; and begged that he might be allowed to die in place of her. Moreover, he told, the whole story of Kazuye's life, and mentioned that her ambition in life was to avenge the death of her father.

The Daimio was greatly touched. Recognizing the chivalry on both sides, he took Okawa into his own service, promising at the same time to aid them both in fulfilling their purpose.

Tears of gratitude came into Okawa's eyes, and he vowed there and then to sacrifice his life for Hosokawa on the very first opportunity.

After about a year had passed a great fire broke out in the castle. It was so sudden that nothing could be done. The wind, fanning the flames, barely gave time for the people to escape, much less to carry off the family valuables.

When all were clear of the burning mass the Daimio suddenly remembered that his title-deeds would be lost, and that such a disaster would be dangerous for his family. Realizing this, he jumped from his horse, and was about to dash back to try and recover them; but his retainers held him, fearing that he would die. Okawa, hearing this, thought with delight that now an opportunity had come to him to save his new master and pay him for the kindness to himself and Kazuye. He rushed into the burning mass, and, having broken open the iron safe, seized the valuable documents. Then he found escape impossible. He was cut off by fire on all sides, and plainly saw that both he and the papers must be burned. At this moment a thought came to him. Though he must be burned, possibly his body might save the documents. Drawing his short sword, he deliberately disemboweled himself, and thrust the roll of papers into his stomach. Then he flung himself on the flaming floor and died. The fire went on. Poor Okawa was charred beyond recognition.

^71:1  -Prince Hosokawa's Most Valuable Title-Deeds - Told to me by Mr. Matsuzaki, and said to be perfectly true, the document in question being in possession of the present Prince Hosokawa.