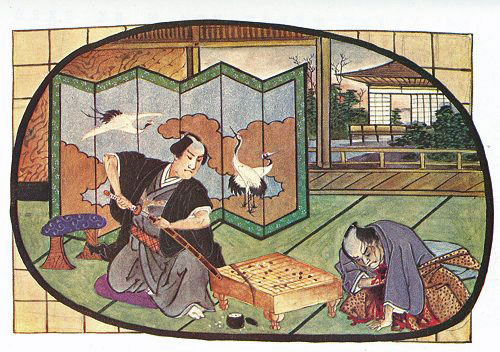 IN olden times, long before the misfortunes of Europeanisation came to Japan, there lived at Kasamatsu, in Nakasatani, near Shichikwai mura Shinji gun, Hitachi Province, a hotheaded old Daimio, Oda Sayemon. His castle stood on the top of a pine-clad hill about three miles from what is now known as Kamitachi station on the Nippon Railway. Sayemon was noted for his bravery as a soldier, for his abominable play at go (or goban), and for his bad temper and violence when he lost, which was invariably.

His most intimate friends among his retainers had tried hard to reform his manners after losing at go; but it was hopeless. All those who won from him he struck in the face with a heavy iron fan, such as was carried by warriors in those days; and he would just as readily have drawn his sword and cut his best friend's head off as be interfered with on those occasions. To be invited to play go with their lord was what all his bold samurai dreaded most. At last it was agreed among them that sooner than suffer the gross indignity of being struck by him when they won they would let him win. After all, it did not much matter, there being no money on the game. Thus Sayemon's game grew worse and worse, for he never learned anything; yet in his conceit he thought he was better than everybody.

On the 3rd of March, in honour of his little daughter O Chio, he gave a dinner-party to his retainers. The 3rd of March is the Dolls' Day (Hina-no-sekku)--the day upon which girls bring out their dolls. People go from house to house to see them, and the little owners offer you sweet white sake in a doll's cup with much ceremony. Sayemon, no doubt, chose this day of feasting as a compliment to his daughter--for he gave sweet white sake after their food, to be drunk to the health of the dolls, instead of men's sake, which the guests would have liked much better. Sayemon himself absolutely disliked sweet sake. So as soon as the feast was over he called Saito Ukon, one of his oldest and most faithful warriors, to come and play go with him, leaving the others to drink. Ukon, curiously enough, had not played with his lord before, and he was delighted that he had been chosen. He had made up his mind to die that evening after giving his master a proper lesson.

In a luxuriously decorated room there was placed a goban (chessboard) with two go-cases containing the men, which are made of white and black stones. The white stones are usually taken by the superior player and the black by the inferior. Without any apology or explanation, Ukon took the case containing the white stones, and began to place them as if he were without question the superior player.

Sayemon's temper began to work up; but he did not show it. So many games of go had his retainers allowed him to win lately, he was fully confident that he should win again, and that Ukon would have in addition to apologize for presuming to take the white stones.

The game ended in a win for Ukon.

'I must have another game,' said Sayemon. 'I was careless in that one. I will soon show you how I can beat you when I try.'

Again Sayemon was beaten--this time not without losing his temper, for his face turned red, his eyes looked devilish, and with a bullying voice full of passion he roared for a third game.

This also Ukon won. Sayemon's wrath knew no bounds. Seizing his iron fan, he was about to smite Ukon a violent blow in the face. His opponent caught him by the wrist, and said:

'My Lord, what ideas have you about games? Your Lordship seems to think curiously about them! It is the better player who wins; while the inferior must fail. If you fail to beat me at go, it is because you are the inferior player. Is this manner of your Lordship's in taking defeat from a superior up to the form of bushido in a samurai, as we are taught it? Be counselled by me, your faithful retainer, and be not so hasty with your anger--it ill befits one in your Lordship's high position.' And, with a look full of reproof at Sayemon, Ukon bowed almost to the ground.

'You insolent rascal!' roared Sayemon. 'How dare you speak to me like that? Don't move! Stand as you are, with your head bowed, so that I may take it off.'

'Your sword is to kill your enemies, not your retainers and friends,' said Ukon. 'Sheathe your sword, my Lord. You need not trouble yourself to kill me, for I have already done seppuku [329:1] in order to offer you the advice which I have given, and to save all others. See here, my Lord!' Ukon opened his clothes and exhibited an immense cut across his stomach.

Sayemon stood for a minute taken aback, and while he thus stood Ukon spoke to him once more, telling him how he must control his temper and treat his subjects better.

On hearing this advice again Sayemon's passion returned. Seizing his sword, he rushed upon Ukon, and, crying, 'Not even by your dying spirit will I allow myself to be advised,' made a furious cut at Ukon's head. He missed, and cut the go-board in two instead. Then, seeing that Ukon was dying rapidly, Sayemon dropped beside him, crying bitterly and saying:

'Much do I regret to see you thus die, oh faithful Ukon! In losing you I lose my oldest and most faithful retainer. You have served me faithfully and fought most gallantly in all my battles. Pardon me, I beg of you! I will take your advice. It was surely a sign by the gods that they were displeased at my conduct when they made me miss your head with my sword and cut the go-board.'

Ukon was pleased to find his lord at last repentant. He said:

'I shall not even in death forget the relation between master and servant, and my spirit shall be with you and watch over your welfare as long as you live.'

Then Ukon breathed his last.

Sayemon was so much moved by the faithfulness of Ukon that he caused him to be buried in his own garden, and he buried the broken go-board with him. From that time on the Lord Sayemon's conduct was completely reformed. He was good and kind to all his subjects, and all his people were happy.

A few months after Ukon's death, a cherry tree sprang out of his grave. In three years the tree grew to be a fine one and bloomed luxuriantly.

On the 3rd of March in the third year, the anniversary of Ukon's death, Sayemon was surprised to find it suddenly in bloom. He was looking at it, and thinking of watering it himself, as usual on that day, when he suddenly saw a faint figure standing by the stem of the tree. Just as he said, 'You are, I know, the spirit of faithful Saito Ukon,' the figure disappeared. Sayemon ran to the tree, to pour water over the roots, when he noticed that the bark of some feet of the stem had all cracked up to the size and shape of the squares of a go-board! He was much impressed. For years afterwards--until, in fact, Sayemon's death--the ghost of Ukon appeared on each 3rd of March.

A fence was built round the tree, which was held sacred; and even to the present, they say, the tree is to be seen.

^326:1 -The Chessboard Cherry Tree - This story (with the exception of the ghost) I believe to be true, for the 'seppuku' of Saito Ukon is just the kind of reasoning that would have been held out in the days of the story, and is even to-day possible in many cases. See a case--quoted by Professor Chamberlain--of the servant to an Englishman at Yokohama, and note the number of cases in the recent war.

We have 1710 guests and no members online