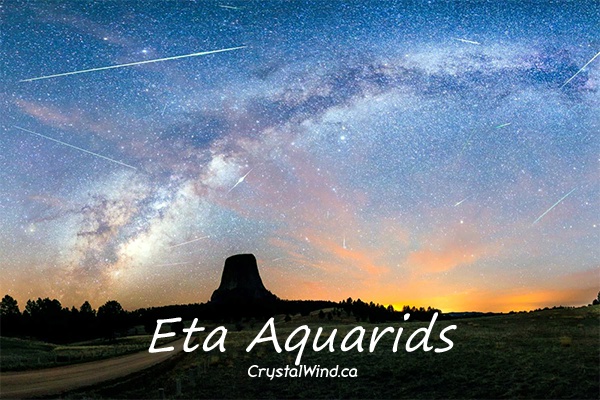 The Eta Aquarid meteor shower is the first of two showers that occur each year as a result of Earth passing through dust released by Halley's Comet, with the second being the Orionids. The point from where the Eta Aquarid meteors appear to radiate is located within the constellation Aquarius. Sadly, this location is a bit of a detriment to observers, because this area of this sky only rises an hour or so before morning twilight begins.

Every year, the earliest Eta Aquarids can be seen around April 21 and they persist until about May 12; however, the number of meteors you are likely to see will be low until around the time of the peak on May 5/6. At this time, observers in the Northern Hemisphere are likely to see about 10 meteors every hour, while Southern Hemisphere observers will see about 30 per hour.

There are other, weaker meteor showers going on around the same time as the Eta Aquarids. The Eta Aquarids generally appear to move fast. When you see a meteor, mentally trace it backwards. If you end up at Aquarius then you have probably seen an Eta Aquarid meteor! If you are not sure where Aquarius is in the sky, the following charts will help you find it from both the Northern Hemisphere and Southern Hemisphere.

The peak of the Eta Aquarid meteor shower, when the most meteors are visible, should happen before dawn on May 7, according to Bill Cooke, who leads NASA's Meteoroid Environment Office. Rates this year can reach 15-20 meteors per hour during that time, Cooke told Space.com, but may be washed out by moonlight. 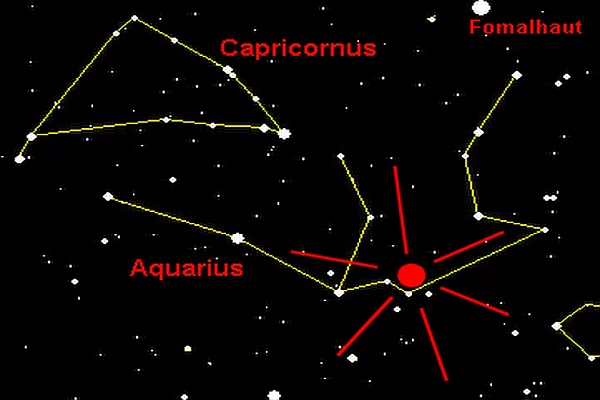 The meteors appear to originate from Eta Aquarii, one of the brighter stars in the constellation Aquarius. (The point meteors appear to come from is called the radiant.) For people in mid-northern latitudes, the radiant won't be very high in the sky, so if that's where you're located, you'll need a dark-sky site with a relatively clear southern horizon to make the most of the meteors.

Observers near the equator will have the best views, but even as far north as Miami, the view will be much better than it will be from New York or San Francisco, for example. Skywatchers in the Southern Hemisphere will have the best view of all and will see the shower's radiant in the north. Nights are also becoming longer in the Southern Hemisphere as the June solstice, and thus the austral winter, is approaching.

This year, the moon will probably wash out the comparatively faint meteor shower during its peak, Cooke said. 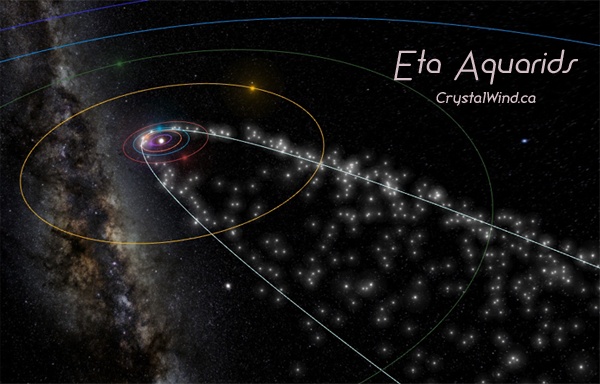 How to see them

Although Eta Aquarid meteors will appear to originate from the same point, you shouldn't stare straight at the radiant to find meteors. If you do, you might miss the meteors that create the longest bright streaks across the sky.

The best way to see the meteors, according to Cooke, is to lie flat on your back and look straight up. That way, you get the widest view of the sky, and you won't have to strain your neck.

What causes the Eta Aquarids?

Meteor showers are the flashes of dust grains that burn up in the atmosphere. They occur when the Earth crosses the paths of comets, which leave dust along their orbits. That's why they happen on certain dates and appear to originate from specific points in the sky. The Eta Aquarids are associated with Halley's Comet, but their path separated from the comet long ago.

"All meteors move off the track of the comet orbit," Cooke said. "When they come off the comet, they are at a slightly different speed, and that changes the orbit a bit … Other things besides gravity mess with it," such as radiation pressure and even interplanetary gas, Cooke explained. [Infographic: How Meteor Showers Work]

The Eta Aquarids don't produce as many meteors per hour as the more famous Perseid meteor shower in August, but they are just as bright, if not brighter. The meteoroids (the actual dust grains) are about a millimeter across, and there's no chance that they'll hit the ground, Cooke said. That's because they are too small and move too fast to endure the plunge through Earth's atmosphere; the heat generated from the friction with the atmosphere obliterates the little pieces of space rock. 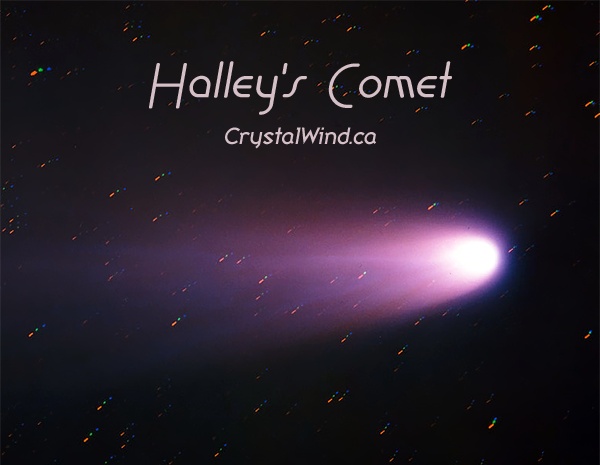 Hints that a shower might be active at the end of April and in early May began in 1863, when H. A. Newton examined the dates of ancient showers and suggested a series of periods which deserved the attention of observers. One of those periods was April 28-30, and included observed showers in 401 AD, 839 AD, 927 AD, 934 AD, and 1009 AD.

The Eta Aquarids were officially discovered in 1870, by Lieutenant-Colonel G. L. Tupman (while sailing in the Mediterranean Sea). He plotted 15 meteors on April 30 and 13 meteors on the night of May 2 and 3. At a later date, W. F. Denning examined the records of the Italian Meteoric Association and identified 45 meteors that were plotted during April 29 to May 5, 1870. Finally, the shower's first confirmation came on April 29, 1871, when Tupman plotted 8 meteors.

Observations of the Eta Aquarids were rare, but, during 1876, A. S. Herschel discovered something which at least began to generate a greater interest in the shower. He conducted a mathematical survey to find which comets were most apt to produce meteor showers. Comet Halley was found to be closest to Earth on May 4, at which time the radiant was in Aquarius. Herschel immediately noted that Tupman's observed radiants of 1870 and 1871 were very near these predictions.

The Eta Aquarids remained a poorly observed shower due to a lack of active meteor observers in the southern hemisphere. Only occasional hints of an active shower were reported, since northern observers had to face the beginnings of twilight shortly after the radiant rose above the eastern horizon. Nevertheless, H. Corder detected activity on the morning of May 4, 1878, with 3 plotted meteors revealing a radiant near the star Eta Aquarii. During this same year, Herschel examined all available observations and noted that the shower's radiant seemed to move further eastward as each day passed.

W. F. Denning finally managed to observe this shower during April 30 to May 6, 1886. A total of 11 meteors were plotted to reveal a radiant near the star Eta Aquarii. From these observations, he stated that the radiant seemed 5 degrees to 7 degrees in diameter. He added that the apparent closeness of his radiant to that predicted by Herschel placed the identity of this shower to Halley's comet "beyond doubt."

Fortunately, several good meteor observers appeared in the southern hemisphere during the 1920's, and the knowledge of primarily southern meteor showers increased dramatically. One of the most prolific observers was R. A. McIntosh (Auckland, New Zealand) and he published one of the more significant studies of the Eta Aquarids during 1929. McIntosh stated that his observations of that year showed activity during April 22 and May 13, which he said presented "a good illustration of the dispersive action of the planets during the centuries that the parent comet has been in existence." He stated that maximum definitely came in early May, though bad weather prevented it from being pinpointed; however, hourly rates remained between 10 and 20 during the period of May 2 to 11. The radiant diameter was consistently about 5 degrees across, and McIntosh's orbital calculations showed excellent agreement with the orbit of Halley's Comet.

Beginning in 1947, the Eta Aquarids joined the ranks of the first streams to be detected by radio-echo techniques. During May 1 to 10, a radio telescope at Jodrell Bank saw hourly rates peak at 12. Little additional data was gathered about this stream by the Jodrell Bank observers during the remainder of the 1940's and throughout the 1950's. In fact, the stream was largely ignored since the radio equipment was rarely operated during the early half of May. Fortunately, observers using the radar equipment at Springhill Meteor Observatory (Ottawa, Canada) and, later, at Ondrejov Observatory (Czechoslovakia) were able to supply some of the most extensive series of data ever accumulated on this stream.

The Springhill data covered the period of May 1 to 10, and a fact revealed by A. Hajduk (Astronomical Institute of the Slovak Academy of Sciences, Bratislava, Czechoslovakia) was the complexity of the activity rates. Using an average compiled for the period 1958-1967, it was noted that two apparent radar maxima occurred: one on May 4 and the other on May 7. These figures represented all radio echoes, but a further study of only the long-duration echoes (lasting about 1 second) revealed the same two dates of maxima, except the decline between the two dates was not as pronounced. Also present was a further rise to maximum that came on May 10.

Amateur astronomers have made significant observations of this meteor shower during the last 30 years. Based on information from amateur organizations in the United States, England, Japan, Australia and New Zealand, it is known that there is a dramatic difference in the activity rates of this shower between the northern and southern hemispheres. Where hourly rates can reach 20 per hour for observers in the United States, Europe, and Japan, these rates jump to 30-40 per hour for observers in Australia and New Zealand. The reason is simple, as Aquarius is so much higher in the sky for observers south of the equator. These organizations have also revealed that about one-third of the Eta Aquarids produce persistent trains, which are trails of luminosity left by the meteors which last at least a second.

During the 1985-1986 apparition of Halley's Comet, several meteor organizations around the world put their members on alert to check for possible increased activity in the Eta Aquarids (and the Orionids). Reports from groups in Australia, New Zealand, Bolivia, North America, and Japan generally indicate that no enhanced activity from this stream was present.

We have 1646 guests and no members online