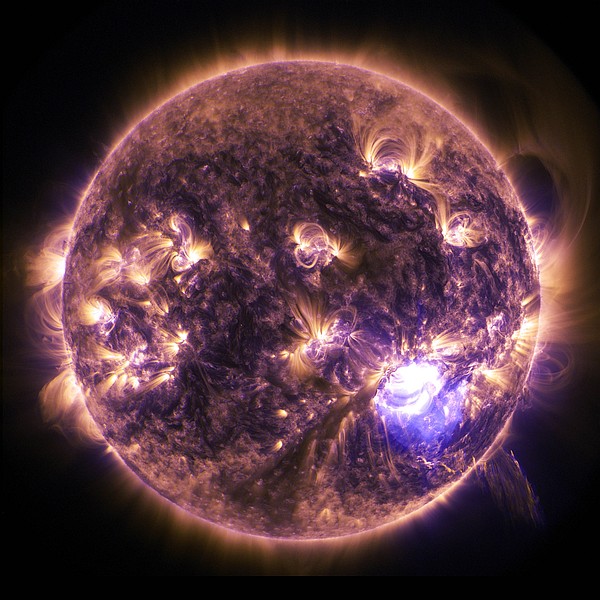 In meditation following undoubtedly the most profound shift experience, I am shown a flash of golden-white light from the core, but then I see white light originating just below the surface of the planet blasting upwards and out through the surface soil, rock, water and into the air surrounding our beautiful Earth.  The Elohim come forward to offer an explanation:

“There has been a shift of enormous magnitude and it has begun from the centre of Gaia. This is the blinding flash of Gaia’s life force where she has reached her threshold and created a deep desire to flush away all negativity arising from the imbalanced presence with humanity in this expression before you.  This extreme cleansing has been activated by Gaia herself, and reflects an instantaneous flushing up through every upper layer of the planet.  This has been a blast of plasma light that is known for its profound quantum activity.

This plasma light energy has been felt by many and it has been recognized as a deep healing action that originated within Mother Earth herself.  Plasma energy is a magnetic energy in that it aligns along the principle of the Soliton Wave.  Deep thorough cleansing is required to inactivate all disharmonious activity upon Gaia’s expression of form.  Nuclear activity, oil drilling, salt mining, fracking, chemical proliferation and rain forest clearing are all activities that leave a legacy of infinite destruction upon this earth that not even you are able to see the devastating implications. This was a prime directive, from Gaia herself, to effect a permanent change and adaptation to the current energetic reality based on the Magenta Ray of Creation.

This wave has had an effect on the ascending humanity only.  In other words, it will affect only those whose souls wish to ascend in this lifetime. Since the soul itself determines the path of the incarnated Being, it is then only the soul that determines the destiny of this incarnation. As a further explanation, we mean to say that if a soul has not come here to ascend in frequency, then that soul is here to play with duality only, and will not notice these energetic shifts nor be attuned to ascension writings. If it is in a soul’s destiny to take part in this ascension experience, they will begin soon to do the inner work in a slow fashion, first gaining valuable lessons leading to inner integration which will then build compassion within their personality structure. This compassion will expand into many more emotional expressions, including Self-Love, which will then naturally align to the frequency of a fifth dimensional expression, while bathing in an infinite field of grace and divine presence.

This plasma flush has been experienced by those Light Warriors whose job it is to receive and share all nature of Light/ Energy, no matter the Source, and it is for this reason that many of you noticed floods of energy coming in through your fields and perhaps even a profound shift within your own physical body. You may have noticed a sudden fatigue to the elemental body (perhaps even a sense of shock within the body elemental), a thirst for clean water, a rejection of food or a craving for sugar, cold chills in the body or the opposite in the form of a heat wave entering your chakras and physical body. There are many symptoms arising from the release of plasma energy and while they do resemble those of regular light body activation, these symptoms are much more intense. This event also triggered extreme weather conditions the world over, especially in the country of Italy, the Alpha and the Omega.

Why does the intensity of this experience vary for every light warrior? Here is a discussion that we have wished to share for some time: The experience of receiving light, processing light, and distributing light, varies from one light warrior to the next and represents a broad spectrum of experience. These experiences are directly related to the role one is here to play during this ascension mission.

Every light warrior has a different role and therefore the nature of each and every personal energetic field reflects this fact. Every light warrior is here to receive, process and distribute light for the benefit of Gaia. There are minor differences between the roles. For instance: one light warrior may be here to receive and anchor a very narrow bandwidth of high frequencies and may do so in a continuous manner. The role of another light warrior may be to receive and anchor a wide bandwidth of low frequencies in an intermittent manner. Further, there is the light warrior that has incarnated with the role to receive, process and distribute a wide bandwidth of frequency for the benefit of humanity as well as the elemental kingdom such as the water and the air. This third group also carries a role in cleansing energetic fields since there has been imbalance and destruction present in your reality for a very long time.

There is the matter of cleansing – the need to cleanse these fields first, before any new light frequency can be transmitted into the reality before you. The transmutation of the incumbent energies first engages this light warrior’s entire field of expression and this is what is referred to as “cleansing”.  Following the “cleanse”, the transmission of new light frequency comes and together the entire process can be very taxing on the light warrior. This cleansing activity is not carried out by every light warrior.

This last group of light warriors has incarnated specifically in this moment of time to align as much life as possible with the largest frequency spread possible. The light warriors whose job it is to do this work are often misunderstood by many, as it is humanity’s propensity to label others through the filter of prejudice often in an unending spiral of non-compassion.

Let us say now: Every Light warrior has a role to play in this great Ascension, and the roles are all very different from one another. It is a non-yielding and dispassionate practice to qualify another’s role during any aspect of this Event, and we await the moment where you will just rest easy, and allow the others to Be who they truly are.

There is no need to claim one role is better than another because each role is needed; each and every light warrior is deeply loved and honoured by All of Creation. We say:  Stand United All Light Warriors of the Ascension!  And Stay United!

With infinite love for All…..Astraea and Amora”

We have 1814 guests and no members online