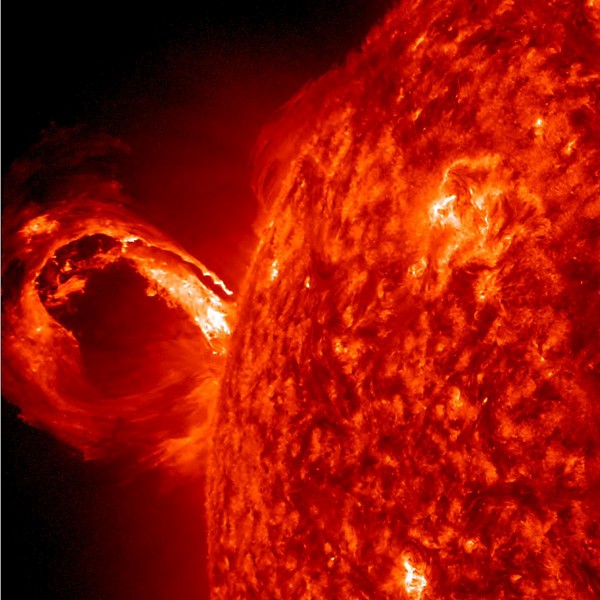 What Are Coronal Mass Ejections?

Every so often, the sun burps, with the power of 20 million nuclear bombs. These hiccups are known as coronal mass ejections or CMEs. They are powerful eruptions near the surface of the sun, driven by kinks in the solar magnetic field. The resulting shocks ripple through the solar system and can interrupt satellites and power grids on Earth.

During a CME, enormous bubbles of superheated gas – called plasma – are ejected from the sun.  Over the course of several hours, a billion tons of material are lifted off the sun’s surface and accelerated to speeds of a million miles per hour (1.6 million kilometers per hour). This can happen several times a day when the sun is most active. During its quieter periods, CMEs occur only about once every five days.

The underlying cause of CMEs is not well understood.  Astronomers agree, however, that the sun’s magnetic field plays a major role.  Because the sun is a fluid, turbulence tends to twist the magnetic field into complex contortions. Twist the field too much, and it kinks, much like a phone cord or toy Slinky. These kinks snap the magnetic field and can potentially drive vast amounts of plasma into space.

The plasma itself is a cloud of protons and electrons carried aloft by the solar wind. Traveling at a million miles per hour (1.6 million kph), the ejecta can cross the 93-million-mile (150-million-km) distance to Earth in just a few days.

A jet moving that fast would get you from Los Angeles to New York in 18 seconds.

Because CMEs get blown off the sun in all directions, most don’t come anywhere near Earth. But every so often, an eruption is aimed right at us.  When the plasma cloud hits our planet, a geomagnetic storm follows. The shock wave of charged particles compresses the Earth’s dayside magnetic field while the nightside gets stretched out. Like an elongated rubber band, the terrestrial magnetic field eventually snaps back with the same amount of energy as a bolt of lightning.

The video below shows the particle flow around Earth as solar ejecta associated with a coronal mass ejection strike:

The onslaught of charged particles and the temporary restructuring of the Earth’s magnetic field has observable effects.  Auroral lights, usually only seen near the poles, can drift to lower latitudes and become more brilliant. The disturbance of the magnetic field can also expose Earth to deadly cosmic rays. The atmosphere still provides enough protection for everyone on the ground. But astronauts in space may receive lethal doses of radiation. During a solar storm in 1989, cosmonauts aboard the Mir space station received their maximum yearly radiation dose in just a few hours!

The real long-lasting danger comes from the storm’s effect on technology.  The flurry of magnetic activity and induced electric currents has the potential to severely disrupt power grids, satellites, communication networks, that is, anything that uses electricity. When the sun aimed a CME at us in that 1989 event I just mentioned, the resulting storm collapsed the Hydro-Québec power grid. Six million people were without power for nine hours.

But the 1989 storm is nothing compared to the geomagnetic storm of 1859.  Known as the Carrington Event, after amateur astronomer Richard Carrington, who observed the flares that triggered the storm, it was the most powerful geomagnetic storm ever recorded. Auroras were observed as far south as Hawaii and the Caribbean. Witnesses at higher latitudes reported being able to read newspapers by the light of the aurora alone. Telegraph networks around the globe catastrophically failed; operators received shocks and telegraph paper caught on fire.

A repeat of the Carrington Event in today’s far more interconnected world would be devastating. Cascading failures could quickly shut power down to millions of people in a matter of minutes. Communication networks would fail and GPS satellites, upon which the entire air traffic system relies, would shut down.

A repeat of 1859 could be truly catastrophic!

Obviously, we don’t want to be surprised by a powerful Earth-bound CME.  That’s why astronomers study the sun. Besides the joy of discovering how stars work, a better understanding of solar activity can help us be better prepared. With even just a few hours warning before an impending CME strike, we could safely shut down and protect essential services. Disruptions may then only last a few hours, rather than the days, weeks, and months that might otherwise occur.

CMEs are just another reminder of how fragile our pale blue dot is as it races around the sun. 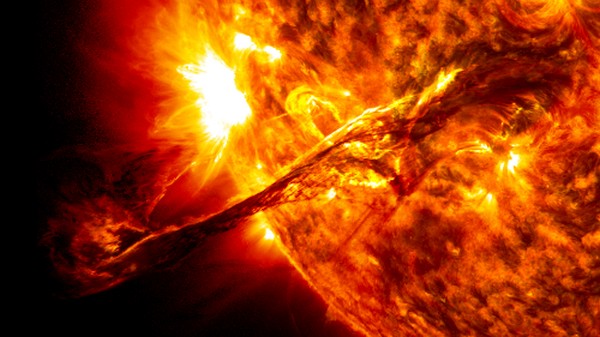 On August 31, 2012, the Solar Dynamics Observatory caught the sun launching streams of plasma into space at nearly 900 miles (about 1,400 km) per second. Image via NASA/GSFC/SDO.

Bottom line: Coronal mass ejections – also knowns as CMEs – are powerful eruptions on the sun’s surface. Caused by instabilities in the sun’s magnetic field, they can launch a billion tons of superheated gas into space. Most drift harmlessly across the solar system, but occasionally one is aimed at Earth. When that happens, the resulting magnetic storm can severely disrupt electrical systems and produce brilliant auroral displays.

We have 1058 guests and no members online