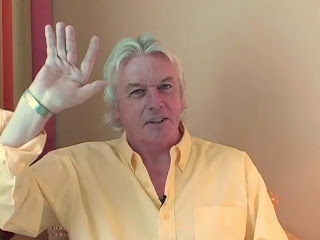 British author David Icke has written 16 books and travelled to over 40 countries since 1990. David Icke is recognised as the leader in his field and is an inspiration to a new generation of conspiracy theory researchers around the world.

David Vaughan Icke is an English writer, public speaker, and former media personality best known for his views on what he calls "who and what is really controlling the world". Describing himself as the most controversial speaker and author in the world, he has written 16 books explaining his position, dubbed "New Age conspiracism", and has attracted a substantial following across the political spectrum. His 533-page The Biggest Secret (1999) has been called the conspiracy theorist's Rosetta Stone.

Icke was a well-known BBC television sports presenter and spokesman for the Green Party, when he had an encounter in 1990 with a psychic who told him that he was a healer placed on Earth for a purpose. In April 1991 he announced on the BBC's Terry Wogan show that he was the son of God, and predicted that the world would soon be devastated by tidal waves and earthquakes. The show changed his life, turning him practically overnight from a respected household name into an object of ridicule.

He continued nevertheless to develop his ideas, and in four books published over seven years - The Robots' Rebellion (1994), And the Truth Shall Set You Free (1995), The Biggest Secret (1999), and Children of the Matrix (2001) - set out a moral and political worldview that combines New-Age spiritualism with a passionate denunciation of what he sees as totalitarian trends in the modern world. At the heart of his theories lies the idea that a secret group of reptilian humanoids called the Babylonian Brotherhood controls humanity, and that many prominent figures are reptilian, including George W. Bush, Queen Elizabeth II, Kris Kristofferson, and Boxcar Willie.

Icke has been criticized for arguing that the reptilians were the original authors of The Protocols of the Elders of Zion - a 1903 Russian forgery purporting to be a plan by the Jewish people to achieve world domination - a claim that has attracted the attention of the far right and the suspicion of Jewish groups. Icke strongly denies there is anything antisemitic about this.

In 1999 He was allowed to enter Canada only after persuading immigration officials that when he said lizards, he meant lizards, but his books were still removed from the shelves of Indigo Books, a Canadian chain, after protests from the Canadian Jewish Congress.

Icke's problems in Canada became the focus in 2001 of a documentary by British journalist Jon Ronson, David Icke, the Lizards and the Jews.