What is Hate and Why All the Hate Now 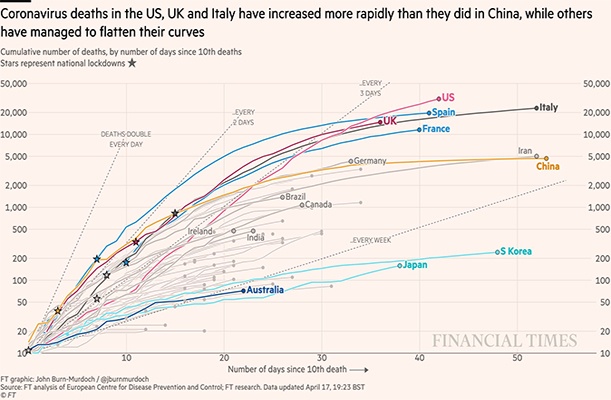 Cumulative deaths by country, plotted against number of days since 10th death occurred; graphic by John Burn-Murdoch for UK FT.

This is the fourth in a series of articles about the current pandemic, drawing on the best available science and data we currently have at our disposal. The previous articles:

This article updates the above by describing some new learning about this virus that might dramatically change what happens now, and the courses of sensible action open to us. Sources include former infectious disease expert Dr Michael Greger’s videos, and summaries from recent science journals.

So here we go: Ten things even most experts didn’t know a month ago:

It should also be noted that vaccines are not panaceas — as I’ve written elsewhere, viruses are not our enemies, but essential parts of every ecosystem. And vaccines don’t guarantee 100% immunity. As we continue to crowd farmed and exotic animals into ever-more confined and crowded spaces, and then eat them, the recent explosion of new viruses and mutations is very likely to outstrip our capacity to develop vaccines (as is already starting to happen with ‘regular’ influenza vaccines).

What’s more, there will always be a horde of rabid anti-vaxxers ready to sabotage vaccine programs any way they can, and refuse to inoculate themselves, to everyone’s peril (read Eula Biss’ brilliant book On Immunity for the full extent of this challenge). Viruses are particularly adept at mutation, and we could soon find ourselves in a never-ending and hopeless race to try to keep ahead of the mutations, precisely when they are getting cleverer, as we provide them more fertile breeding grounds, at adapting to our vulnerabilities.

For a brief but comprehensive summary of everything we know right now, please read this.