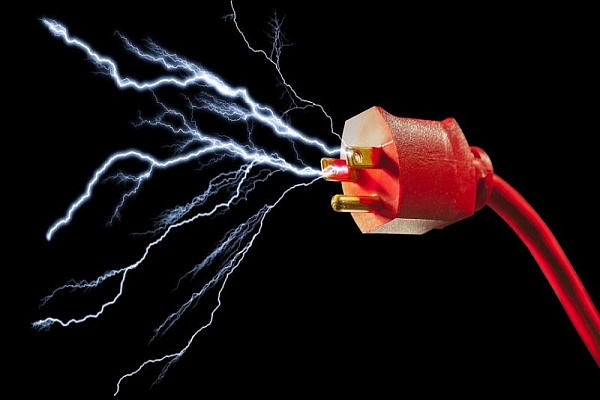 The New Moon on Sunday, October 27, 2019, at 4° Scorpio is opposite Uranus. This makes the new moon October 2019 astrology shocking, unpredictable and erratic. It will make people restless, impulsive and even crazy.

Uranus joins a star that amplifies the spontaneous nature of this planet. It portends accidents, fire, war, and earthquakes. So the October 2019 new moon should be approached with caution, patience, and flexibility. Adapt to sudden change and say sorry if you make a mistake.

The October 27 new moon at 04°25′ Scorpio is almost exactly opposite Uranus as shown in the chart below. Such a tiny orb of aspect makes this a very strong new moon. It is also uncomplicated by any other aspects to the new moon which makes it even stronger. Both the new moon and Uranus are on fixed stars which add some astrological influence. 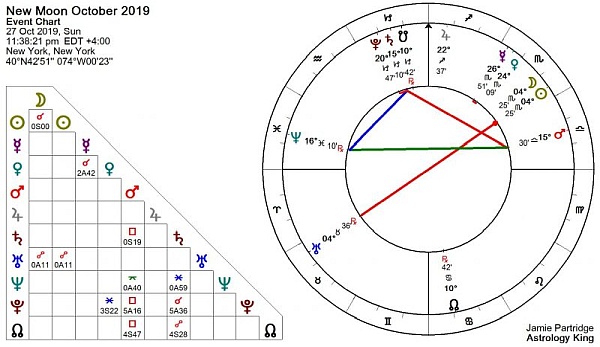 Your actions and reactions can also lead to risky or odd behavior, mistakes or accidents. Even if you cope well with change and excitement, someone close to you may become unreliable, crazy or provocative. Someone new may enter your life, cause havoc, then leave just as quickly as they came.

So this could be an especially challenging new moon for relationships. An increased need for personal freedom and greater independence could create distance between partners and even separation. Selfishness and egotism will not help matters but are likely with a new moon opposite Uranus.

The best way to deal with this unpredictable influence is flexibility and a willingness to adapt to changing conditions. Although initially upsetting and you may resist change, it may offer a better way forward if you keep an open mind.

Although new moon October 2019 is in the Sign of Scorpio, it gets astrological influence from a star in the Constellation of Virgo, as shown in the image below. Due to the Precession of the Equinoxes, the Sun Signs are almost a whole Sign out of alignment with the Constellations from which they were named. 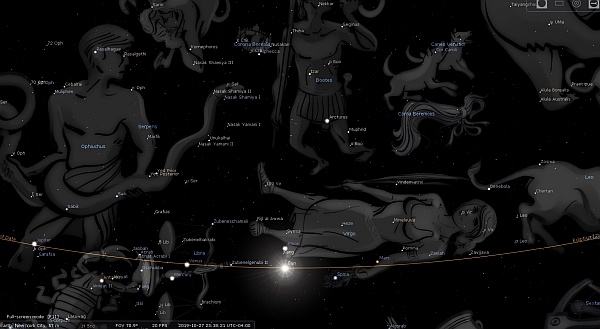 The new moon is conjunct fixed star Syrma at 04 ♏ 03. It relates to “the heavy personal responsibility which is implicit in the occult questing and acquisition of spiritual power.” [1] It is a reminder to seek forgiveness for your wrongdoings no matter how spiritually evolved or powerful you think you are.

Uranus is conjunct fixed star Sheratan at 04 ♉ 14. It causes “bodily injuries, unscrupulous defeat, destruction by fire, war or earthquake.” [2] This star in the Horn of the Ram has a violent nature, and “danger is indicated when acting impulsively and in a foolhardy fashion.” [3] This is especially so with Uranus conjunct Sheratan.

The 1st Chinese Lunar Mansion, the Horn (24 ♎ 06 to 04 ♏ 45) is a lucky mansion that is excellent for construction or buying land. It represents agriculture, new generations, growth, and births. All who marry on this day gain great credit and standing and especially favors the marriage of the eldest son of the family. But calamities and epidemics in the family within three years if funerals are planned on this day.

The October 27 new moon opposite Uranus is extremely powerful and likely to result in sudden shocks, freak accidents, and unexpected encounters. It will make people erratic, impulsive, impatient, agitated, unpredictable and crazy.

Uranus is on a star that acts like Uranus, causing accidents, violence, and earthquakes. Critically, just as with Uranus, it causes danger when acting impulsively. So remember to be patient and think twice before taking risks. If you do make mistakes during this moon phase, fixed star Syrma encourages you to say sorry.

Politicians are likely to make unexpected decisions that could lead to aggressive responses, rebellion, and stock market shocks. They will also have to react to sudden, unforeseen events. Expect this new moon to inflame the rebellion in Hong Kong as well as other hot spots around the globe.

The effects of the October 27 new moon last four weeks up to the November 26 new moon. The best time for making a fresh start and for beginning new projects is during the first two weeks of this new moon cycle. This waxing phase of the Moon lasts from October 27 to the November 12 full moon.

We have 1305 guests and no members online